How To Spend a Day Exploring Hauz Khas Village 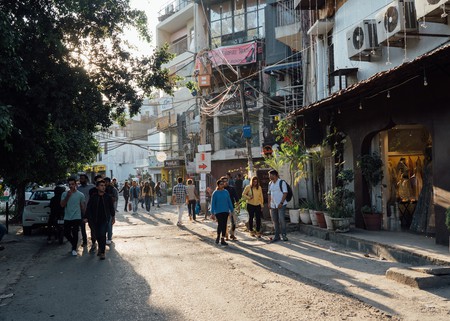 Spread throughout a tangle of Medieval ruins, the hip Hauz Khas Village is one of Delhi’s top spots for shopping, drinking and dining. Here’s how to spend a perfect day experiencing the best of this happening hang-out.

The ruins of ancient cities poke through the streets all over Delhi like the bones of a fallen giant. People queue for ATMs next to crumbling Mughal mausoleums and haggle for groceries on the toppled walls of vanished forts. But nowhere is the juxtaposition between old and new more pronounced than in Hauz Khas Village, the hip and arty enclave that has grown up over the ruins of Siri, the fortress city founded by Sultan Alauddin Khilji. 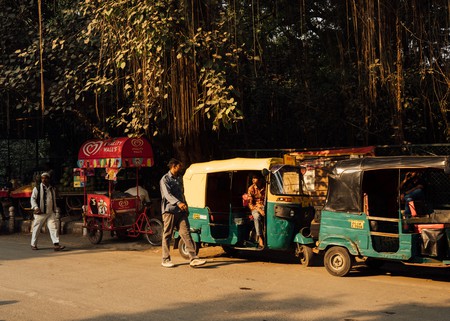 Surrounding the large water tank that once supplied Medieval Siri, Hauz Khas is the best place to see young Delhiites shaking off the shackles of tradition and forging a new, cosmopolitan identity. In this bohemian quarter, bars serve golgappa (liquid-filled fried bread balls) and rainbow-coloured cocktails overlooking the forests where sultans once hunted, and teenage couples with iPads and Bluetooth headphones sit and chat on the broken walls of the 14th-century seminary where scholars once recited verses from the Quran. 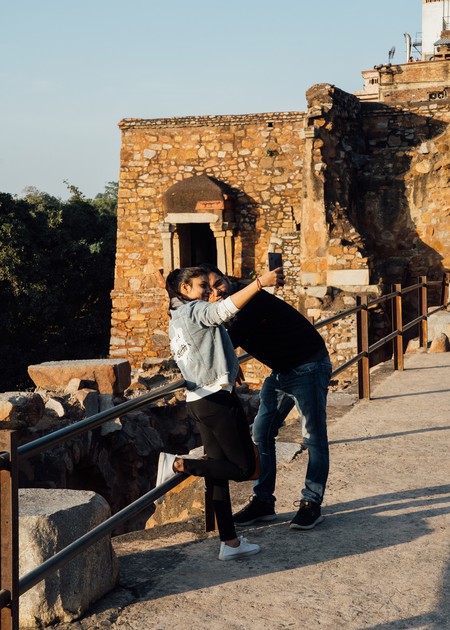 It’s best to give yourself a day to explore Hauz Khas Village. Spend it browsing art galleries and antique shops, drifting through atmospheric ruins, sipping cappuccinos overlooking the calm waters of Hauz Khas Lake and feeling the vibrations of one of Delhi’s liveliest eating and drinking quarters.

There’s a good reason to come to Hauz Khas early in the morning. Before breakfast, the streets are half-deserted, and spooky morning mist hangs over the madrasa ruins and the onion domes of a dozen scattered mausoleums. Go right to the heart of the enclave, to the small park by Firoz Shah’s Tomb, and order a cup of sweet chai from a roadside vendor. Then sit back and watch Hauz Khas come alive. 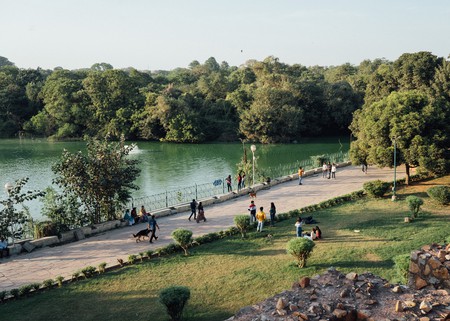 Once the mist clears, it’s high time for a bite, so duck into The Tea Room. An endearingly bookish upstairs café, it serves tasty all-day breakfasts, such as scrambled paneer with fenugreek and Danish smørrebrød (open sandwiches) with sauteed apple and sweet onions, plus good coffee and a colourful array of teas.

Suitably refreshed, you’ll be ready to take on the ruins of Firoz Shah’s Medieval city. The main fortress of the Delhi Sultanate lies just to the east, bordering Hauz Khas Forest and the urban village of Shahpur Jat (well worth exploring in its own right). Meanwhile, the lake at the heart of Hauz Khas Village was excavated to supply ancient Siri with water and soon became the centre of a vast complex of mausoleums and madrasas that catered to the rulers of Delhi in the 14th century. 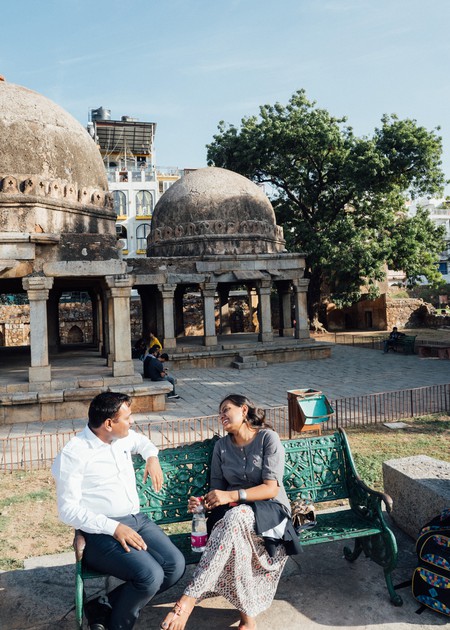 During the time of Firoz Shah Tughlaq, the reluctant third ruler of the Tughlaq dynasty, Hauz Khas was known as Tarababad – the City of Joy – and in 1388, the sultan was buried in a grand, domed mausoleum beside the madrasa he founded. Tracing the shores of the lake, the L-shaped madrasa building has become a hang-out for local students, who sit, eat, sketch and chat in the lake-facing windows of the vast, ruined seminary. 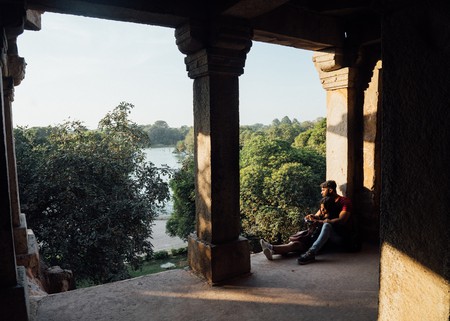 Climb down through the ruins to reach the lakeshore, where the choking smog of Delhi seems to dissipate, if only for a moment, and walking and jogging trails snake under the trees through the green expanse of Hauz Khas Village Park. Follow the track around the southern shore to enter Deer Park, where spotted deer wander meditatively among the trees, and peacocks scavenge treats from local chaat (snack) vendors. Complete the circuit via the north shore, passing more ruined tombs from the Sultanate era.

Have lunch in a cool café

For a wholesome, healthy lunch, Hauz Khas is home to many cool cafés, serving everything from deli sandwiches to modern Indian fusion treats. For views over the parklands while you eat, Coast Cafe – on the second and third floors above the chic OGAAN boutique – serves a globe-trotting menu of tacos, satays, salads and gourmet burgers (with or without meat) in a bright, modern dining room. If you just fancy coffee, stake out a spot on the greenery-covered balcony. 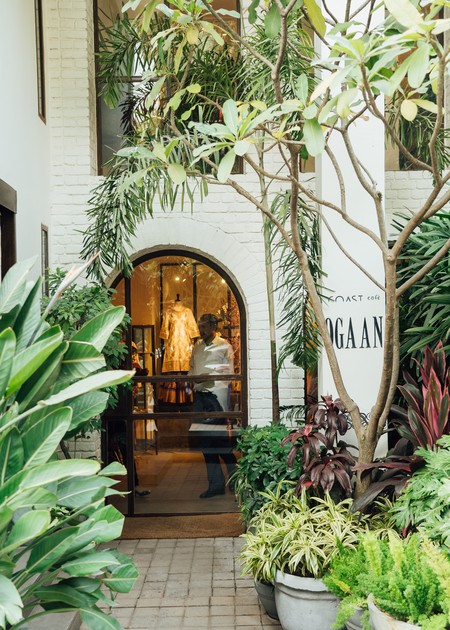 Hauz Khas is crammed with cute boutiques, antique stores, gift shops and outlets for local artists and designers, offering everything from ornately brocaded kurta shirts and salwar kameez to vintage Indian movie posters and reclaimed wood carvings. For movie memorabilia and other retro souvenirs, try All Arts near the Naivedyam restaurant. For lavishly embroidered gowns and lehenga skirts fit for a Bollywood wedding, drop into Ricco. If you want to walk out wearing the name of a high-profile Indian designer, bring a big budget to OGAAN. 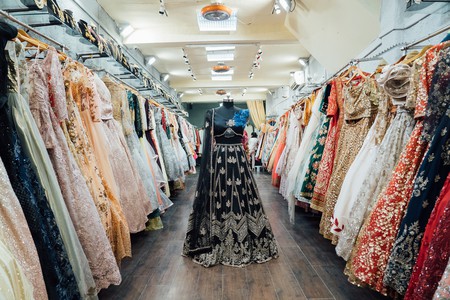 If you need somewhere to put down the shopping bags and recharge, swing by the bohemian Kunzum Travel Café, an offbeat travel-themed spot run by enthusiastic Delhi traveller Ajay Jain (who publishes Delhi travel guides), and named after his favourite mountain pass in the high Himalayas. The café offers free Wi-Fi, and you pay what you feel is right for the coffee and biscuits.

Dine and drink the night away 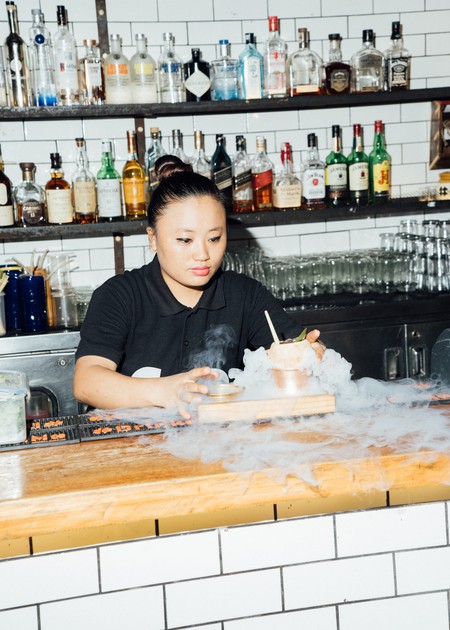 Finish off the evening with a beer or cocktail and some dancing at Hauz Khas Social. At this loft-like urban space with a view, young Delhiites come to let their hair down, dance to DJs and live bands and sample Indian riffs on classic cocktails (gin with kaffir lime, lemongrass and ginger, for example) and tasty craft beers.