How to Spend 48 Hours in Agra, India 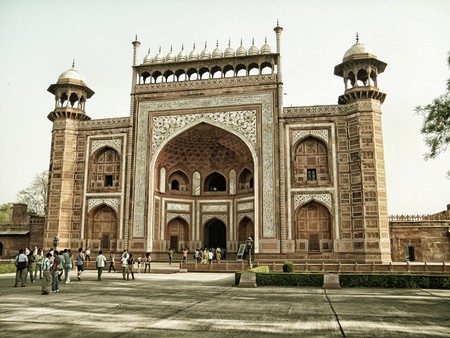 One of the entrance gates to the Taj Mahal, Agra | © MangoTraveler / Pixabay

Agra, the city of the magnificent Taj Mahal, is one of India’s historical and cultural hubs. It is home to beautiful parks, a host of Mughal architectural wonders and a colorful street life. If you’re planning a trip to the city, then here’s how you can best explore Agra in 48 hours.

You start with the Taj Mahal. Yes, early morning around 6am, head straight to see this world wonder. Of the two sunrises that you have, we suggest you spend one witnessing the beauty of Taj Mahal – it’s mesmerizing then. The monument remains open from 6am to 7pm. Early morning hours are less crowded and best to capture the perfect money shot. Plan your visit to Agra in the early summer months; that’s the best time to see the Taj Mahal. You must purchase your tickets online from the official website of UP Tourism to avoid queues at the ticket counter. Guided tour of the Taj Mahal will be the best. Make sure you either hire a government approved guide or have an audio guide with you. Taj Mahal is closed on Fridays, so plan your trip accordingly. 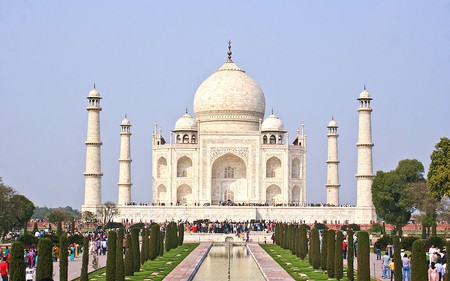 We know that the Taj Mahal is indeed captivating. And thus, recommend taking the Taj Nature walk, one of the best gardens in Agra. It is a nine-kilometer trail, rich in various flora and fauna, with viewpoints and watchtowers. From here, you can admire the Taj Mahal a little longer. The trail is on the banks of river Yamuna, 500 meters away from the monument. You can enjoy some quiet time here and also explore the nearby lesser known parts of the city.

For lunch, you may head to Saniya Palace Rooftop Restaurant. It is located by the south entrance gate of the Taj Mahal, on top of a guesthouse. Along with a number of delectable dishes, this restaurant also offers some pretty amazing views of the Taj, which you can enjoy while eating.

After lunch, head to the red sandstone beauty of the city, the Agra Fort, situated on the banks of Yamuna. It is just two and a half kilometers away from the Taj Mahal and is known to be one of the finest Mughal forts. It has a number of beautiful palaces, audience halls, gardens and mosques, which were used by the Mughal emperors. 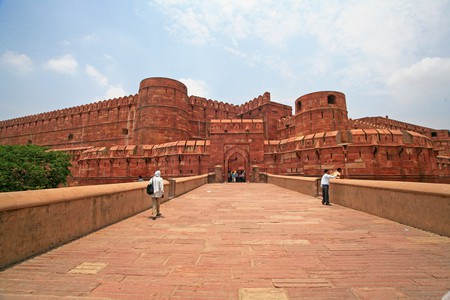 Right opposite the Agra Fort is the Jama Masjid, often referred to as the Friday Mosque. Shah Jahan built this marble and red sandstone structure for his daughter, Jahanara Begum. In the same complex also lies Sheikh Salim Chishti’s Tomb, an honored Sufi saint. 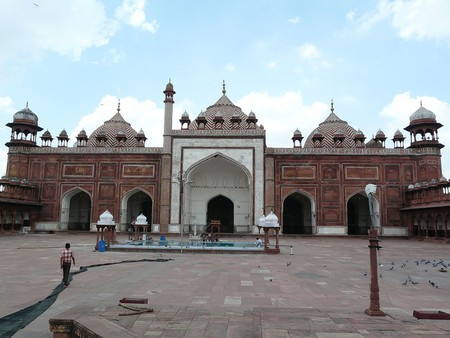 During the later part of the afternoon, you can visit the Sikandra Complex, which houses Emperor Akbar’s Tomb. It is yet another architectural marvel of the city, with inlaid geometric patterns on white marble, heavenly gardens and a pleasing surrounding. The gateway to the tomb is a stunning three-storey minaret, which is indeed a sight to behold. The Sikandra Complex also has the tomb of Mariam Zamani, who was the Christian wife of Akbar from Goa and also the mother of Jehangir. 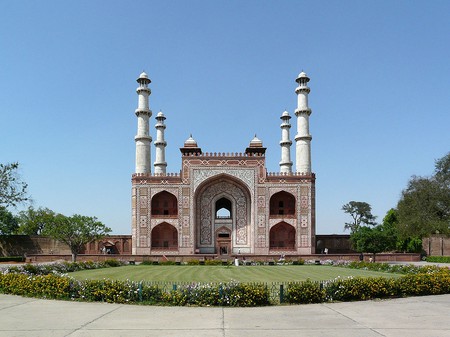 As the evening approaches, head to the Kalakriti Cultural and Convention Center. Here you get to see some grand cultural performances about the Taj Mahal, in Bollywood style light and sound show. For those who wish to know the intriguing history of the Taj Mahal, watching these theater performances here can be an interesting experience. Art exhibitions are also held here, so you can witness some local art forms too.

For dinner, you must go to Esphahan at Oberoi Amarvilas. It is the best restaurant in Agra to enjoy Awadhi cuisine, and offers much more than just a meal. The restaurant is set in an attractive courtyard with dramatic pillars and a glass wall that reveals the kitchen. Along with some gorgeously presented dishes, you can also enjoy the warmhearted service and live Indian classical music. 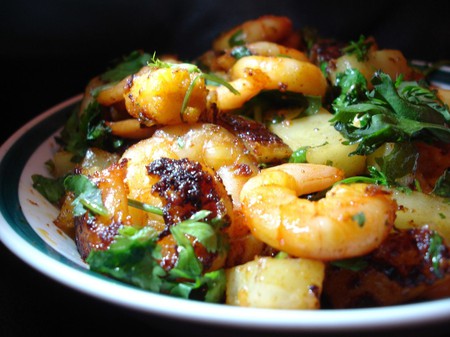 Next day, early morning, head to Fatehpur Sikri, to see your second sunrise in the victory town of 16th century. Fatehpur Sikri is situated at a distance of 40 kilometers from Agra, about half an hour drive away, and is a UNESCO World Heritage Site. This walled city was constructed in 15 years and comprises a number of courts, palaces, a mosque and a harem. The architecture of the building reflects Persian and Mughal styles. 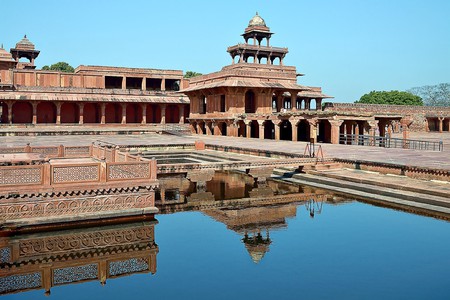 The main entrance gate to the palace of Fatehpur Sikri is the Buland Darwaza, often referred to as the ‘Gate of Magnificence’. It is said to be the highest gateway in the world and showcases some intricate Mughal architecture. Akbar built the Buland Darwaza in celebration of his victory over Gujarat. 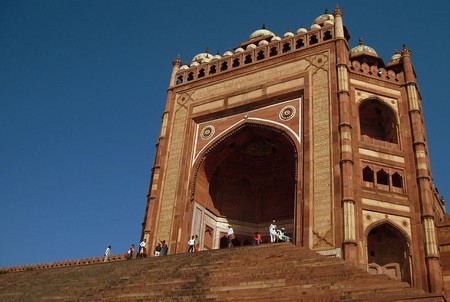 After visiting Fatehpur Sikri, head back to Agra. You can either stop by for a brunch at the local market or enjoy an Indian meal at the Silk Route. This restaurant has mouth-watering dishes and an amazing white marble décor. After the meal, you can visit the tomb of Itimad-ud-Daulah. This tomb is also famously called the Baby Taj. Though it looks nothing like the Taj Mahal, it is regarded as the initial draft of the monument. The tomb stands on the banks of river Yamuna and was built by Noor Jahan, the wife of Jehangir, to honor her parents. 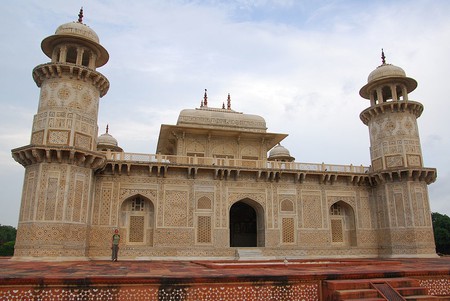 Agra can also be a great place for shopaholics. In the late afternoon, you can go to some popular shopping streets of the city like Sadar Bazaar and Mughal Bazaar for ethnic clothes, leather ware, shoes and accessories. Also, if you wish to take back some authentic Indian spices, then you must visit the Rawatpara market.

Your visit to Agra would remain incomplete if you do not shop for the Agra marble. Though there are many shops where you can buy marble handicrafts, but Subhash Emporium is the oldest in the city, and quite popular for their high-quality workmanship. These are slightly expensive but definitely worth buying. 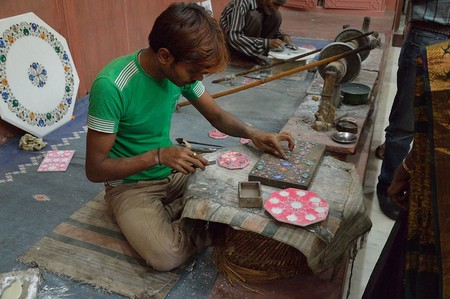 The best way to spend your second evening in Agra would be to take a balloon safari over the city. Catch a glimpse of the Taj Mahal from up above in a helium balloon during sunset, capturing the beauty of the monument at its yet another best time. The balloons carry about 16 people at a time and go up to the height of 250 feet. Although these safari rides are available from mornings to 8:30pm, evening is the best time to experience one.

After the balloon ride, you must go to savor the iconic street food and sweets of Agra. Spicy berahi, samosa, aloo-tikki, kachori, golgappa, and paneer tikka are the famous chaat (street food) here. You can enjoy these during your evening stroll in the local markets. Petha is the sweet souvenir of Agra that you must take back home. Pracheen Petha Store, Panchis, Hari Petha and Bhimsain Baidyanath are the best places to shop for this delicious sweet. 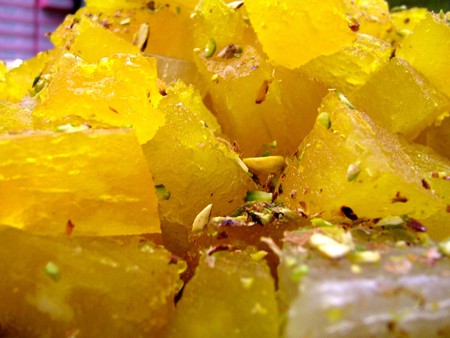 Petha, the famous sweet of Agra | © Laura / Flickr
Give us feedback