How to Experience Punjabi Culture in India 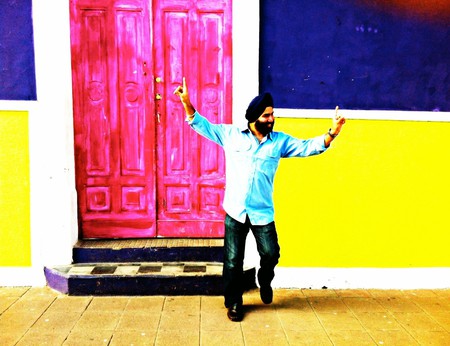 A Punjabi man dancing and having fun | © Mobilemag / Pixabay

Punjab has one of the most vibrant cultures in the world. Known for their heartwarming and hospitable nature, the people here truly believe in living life king size. And that’s probably why the state has such a grand and impressive aura. Read on and find out how you can experience the best of Punjab.

The land of five rivers

Punjab is called the land of five rivers – ‘punj’ means five and ‘ab’ means water. Beas, Sutlej, Chenab, Ravi and Jhelum are the five rivers that flow in this land and divide it into three major parts called Doaba, Majha and Malwa. The rivers make the soil here quite fertile, which is why the state gives the entire country a good harvest. When you visit, you’ll surely find a number of agricultural fields blooming with sugarcane, maize, barley and other cereal crops. 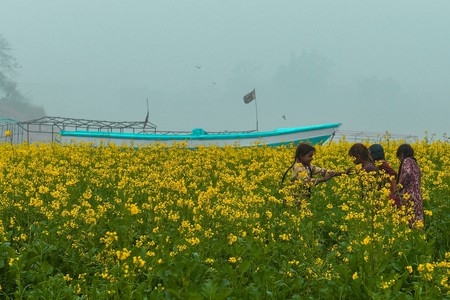 Punjabi cuisine dominates the majority of food in north India. Whether you’re vegetarian or non-vegetarian, the state has a number of delectable dishes for all. The people are very welcoming, so if you happen to visit a Punjabi family, be prepared for a warm reception with a big glass of lassi, the refreshing welcome drink, and some typical Punjabi food. 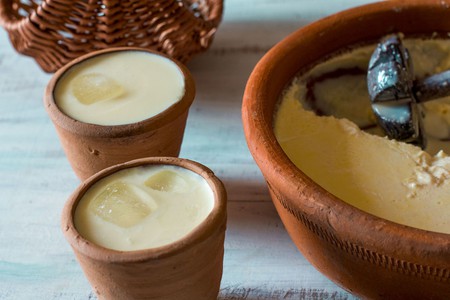 The state has milk in abundance, and thus milk products are a part of everyday meals – buttermilk and curd being essentials. People here aren’t fans of marinades or sauces, but they prefer their food to be spicy and full of ghee. A typical Punjabi breakfast consists of paraunthas (also known as parathas) stuffed with different vegetables like potato, cauliflower, onion, radish, or even cottage cheese, accompanied by a large glass of buttermilk. Makki di roti (maize bread) and sarson ka saag (mustard leaf curry) is a traditional dish commonly preferred for lunch. Bhunna gosht, mah ki dal, dahi raita and tandoori roti are enjoyed during dinner time. 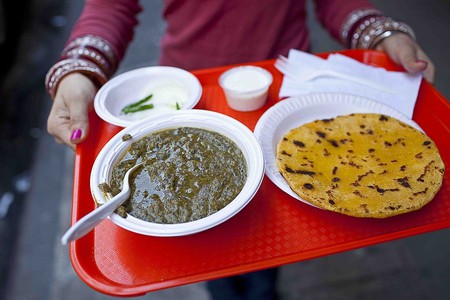 Certain non-vegetarian dishes are also popular like roghan josh, tandoori chicken, karahi chicken, and chicken tikka, which are generally accompanied with naan, phulka, puri or rice. While at a Punjabi restaurant, you can also choose from other food items like shahi paneer, rajma, dal makhni, rao ki kheer, along with papad and various milk sweets. Chhole-kulche is yet another Punjabi delicacy, best enjoyed in Amristar. So make sure you try some during your visit to the city. 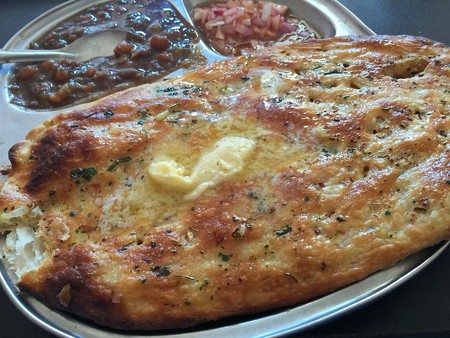 Just like this colorful state, the people here like to dress in vibrant colors. As there’s a huge Sikh population, you’ll find a lot of men wearing turbans (locally called pagg) in different styles. Traditionally, men used to wear kurta and tehmat (a baggy pajama made of cotton or silk), which has now been replaced with kurta-pajama. The women folk used to wear ghaghra (a long skirt) and kameez (a long top), along with a waistcoat, but now they tend to wear salwar suits, with different varieties of salwars (like churidar and patiala). The salwar suit is also accompanied with a dupatta which comes in vivid colors and attractive phulkari embroidery. Both men and women often wear Punjabi shoes called juttis with their outfits. 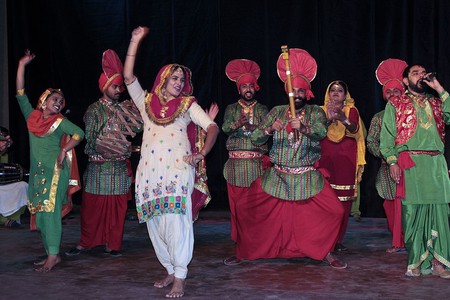 Punjabi music is full of passion and exuberance. The songs are melodious as well as energetic. Though the music of Punjab is becoming popular all over the world and is being featured in quite a lot of Bollywood movies these days, the true essence of the culture lies in its folk music. It comprises of simple instruments, such as dhol and dholak, played in sync with Punjabi boliyan (lyrics). You can truly enjoy this during Punjabi weddings, family functions or festivals. You can even catch some local farmers singing folk songs at the time of harvest. 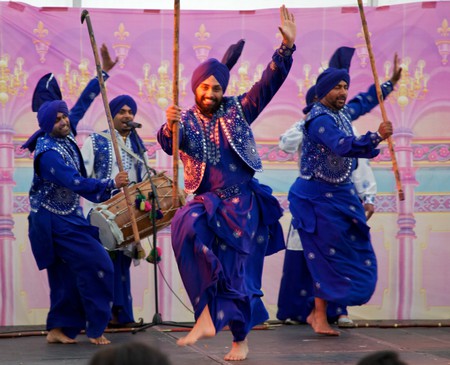 The people of Punjab love to dance. No matter what the occasion is, they’re always up for some fancy footwork. Bhangra is the most famous of all dance forms here, performed mainly by men. Giddha is another dance practiced mainly by Punjabi women. Loud drumming and hooting is often seen during Punjabi dances. Kikli, sammi, jhumar and gatka are some other folk dances which you get to see here. The steps are both fun and easy; you can learn them in just a few minutes. 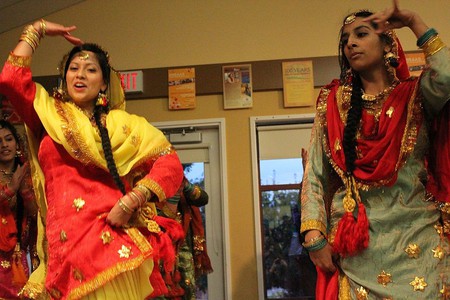 Arts and crafts of Punjab

Apart from the effervescent dance and music, Punjab is also popular for its handicrafts and decorative designs. Earlier, the women of the house would weave woollen clothes for the entire family. They would also weave silk shawls with traditional motifs.

As mentioned above, Punjab has a unique embroidery technique known as phulkari, often seen on dupattas. These dupattas make for beautiful souvenirs that you must buy during your visit. Worn as a scarf of stole, they can make any outfit look colorful and elegant.

Some other crafts practiced in the state include wood work, papier-mache, lacquer work and calico painting. These can make for really interesting art pieces for your home. 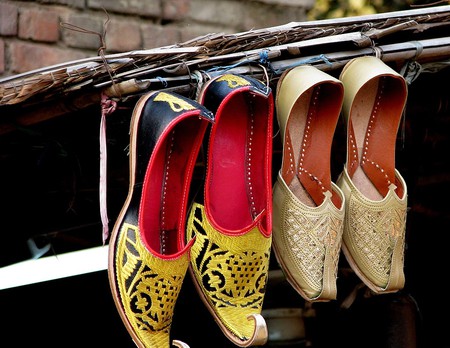 Punjabis mostly live in joint families, and thus every occasion is enjoyed together like a huge celebration. Blood relations are very important in Punjabi culture. From children to the elderly, every member of the family has unique duties and responsibilities, which can be easily observed during births, festivals, marriages, funerals, as well as everyday social occasions. 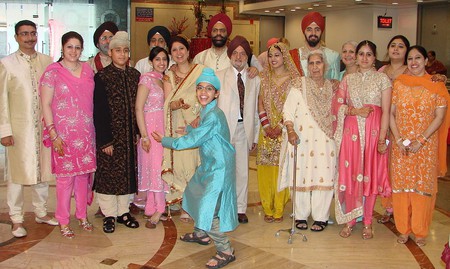 A Punjabi family at a wedding | © Scarletletter4455 / WikiCommons

A very important custom is the exchange of gifts. Punjabis believe that giving gifts establishes close relationships with family members, relatives, friends, and the society at large. From small ceremonies like the first haircut to elaborate weddings, Punjabis always give something to one another, either in cash or in kind. Where else can you witness all of this?

The high-spirited Punjabis celebrate every festival with vivacious energy. And it is during these times that you get to experience this amazing culture in its full glory. Although Hindu festivals such as Holi, Diwali and Dussehra are also celebrated, Lohri, Baisakhi and Guru Nanak Jayanti hold utmost importance as Sikhism is the most practiced religion of the state. During these festivals, there is unparalleled enthusiasm everywhere. From dance and music to an assortment of delicious cuisines – you can witness all at once. So if you ever plan a trip to Punjab, make sure it’s around these festivals. 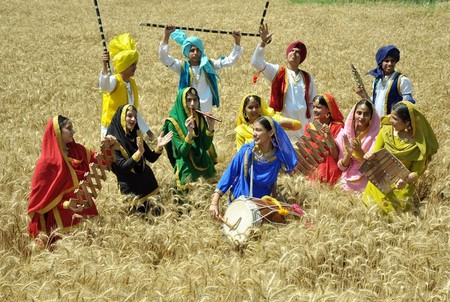 Punjab is the place of Sikhism. The holiest of all Sikh shrines, Sri Harmandir Sahib (the Golden Temple) is in the city of Amritsar. This temple has to be on your list of must-visit attractions. Don’t forget to enjoy the delicious langar (free meal served at Gurdwaras). Of the five religious Takhts of Sikhism (temporal seats of religious authority), three are in Punjab, namely Akal Takht Sahib, Anandpur Sahib and Takht Sri Damdama Sahib. To closely observe Sikhism, you should pay a visit to these places as well.

Other popular tourist places include Jallianwala Bagh and Wagah Border in Amristar, Sheesh Mahal, Moti Bagh Palace and Qila Mubarak in Patiala, and Sukhna Lake, Rose Garden and Rock Garden in the capital of Punjab, Chandigarh.

(Quick shopping tip: The state is widely known for its hosiery products, so you can also pick up some good quality hosiery clothes.) 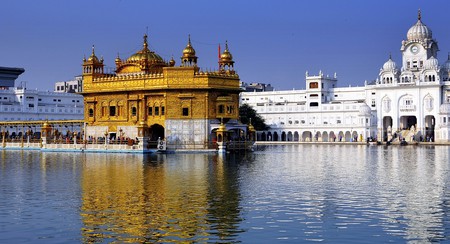 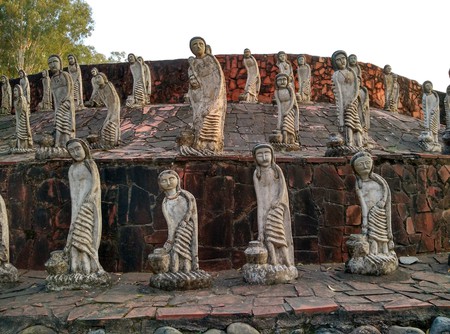