How Navaratri is Celebrated Across India 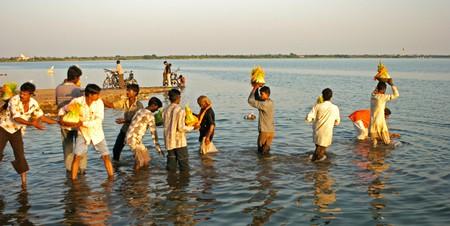 Navaratri, a nine-day festival, honours the nine forms of Durga, the Hindu warrior goddess. Each state in India celebrates in its own special way.

The Hindu festival of Navaratri, which means nine (nava) nights (ratri) in Sanskrit, is celebrated over nine consecutive nights during the autumn season. The celebrations vary from region to region according to local customs and traditions, but the main theme of the festival is the victory of good over evil. Although Navaratri is devoted to goddess Durga, some states in South India also dedicate it to other Hindu deities like Saraswati, the goddess of knowledge. 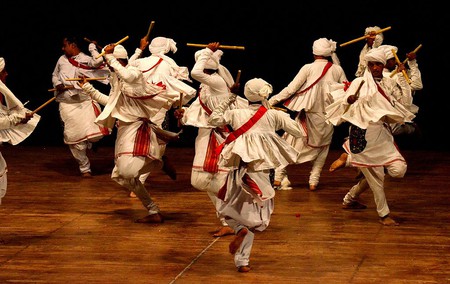 A traditional dance being performed during Navaratri | © NIMESH DUSRA / WikiCommons

The state of Gujarat has a unique way of celebrating Navaratri. Devotees observe fast for nine days to honour Durga and her nine different incarnations. Every evening, women who are fasting dedicate their prayers to an earthen pot lit with diyas (candles). The pot, called garbo, represents the source of life and the light represents shakti (power). Navaratri in Gujarat is also known for the garba raas, a traditional dance performed by men and women around the garbo or an image of Durga.

In West Bengal, and in most eastern states like Assam, Tripura, Odisha and Jharkhand, Navaratri is celebrated as Durga Puja, the main annual festival for Bengali Hindus that commemorates the victory of Durga over the shape-shifting buffalo demon Mahishasura. During the celebrations, elaborately designed pandals (marquees) and life-size statues of the goddess Durga are installed here in every neighbourhood. Dressed in traditional attire, devotees offer prayers in the evening and perform a dhunuchi naach, a special dance with earthen lamps. 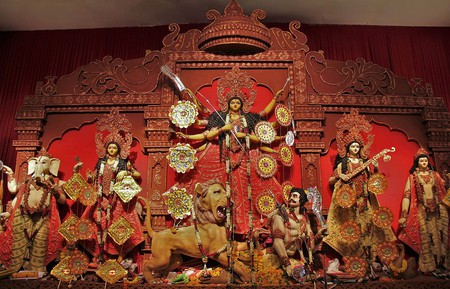 In North India, Navaratri is celebrated with the Ramlila – a dramatic enactment of the life of god Ram from the Hindu epic Ramayana – performed in theatres, temples and temporary stages. After nine days, effigies of Ram’s nemesis, demon Ravana and his brothers Kumbhakarna and Meghanada, are burnt to symbolise the end of all evil from this world. The end of Navaratri also marks the beginning of another important Hindu festival, the Dussehra. 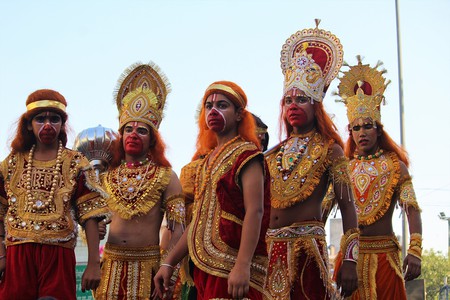 In the southern state of Tamil Nadu, Navaratri pays homage not only to Durga, but also to other Hindu goddesses like Laxmi and Saraswati. The three goddesses are venerated on three separate days during which friends and family gather to celebrate and exchange gifts, such as clothes, sweets and coconuts. Another custom typical of the Navaratri celebrations in South India is the display of kolu (figurines), which are arranged to narrate popular legends from the Hindu scriptures. 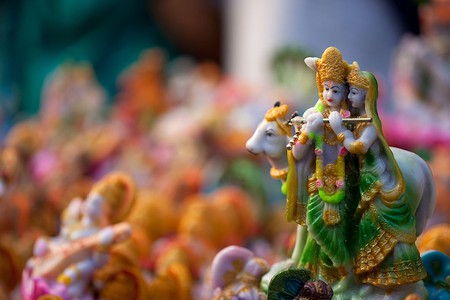 Also known as Dussehra, Navaratri, particularly in the city of Mysore in Karnataka, follows the same rituals first practised by King Raja Wodeyar I in 1610. On mahanavami (the ninth day of the festival), the royal sword is set on a throne to be worshipped and taken on a procession of elephants and horses. On the 10th day (dashami), another grand procession of dancers and musicians escorting an image of goddess Chamundeshwari (a form of Durga) mounted on a golden saddle atop an elephant is carried through the city. 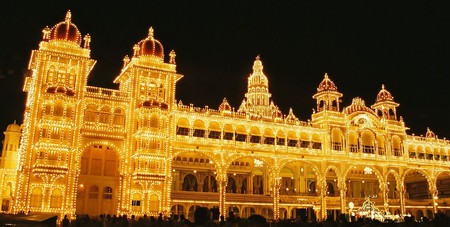 In Kerala, goddess Saraswati is worshipped during the festival. Education takes centre stage during this time as people place books on the altar of the goddess of knowledge. A prayer ceremony takes place on ashtami (the eighth day of the festival) and on the 10th day, the books are taken out and read as part of the ritual. 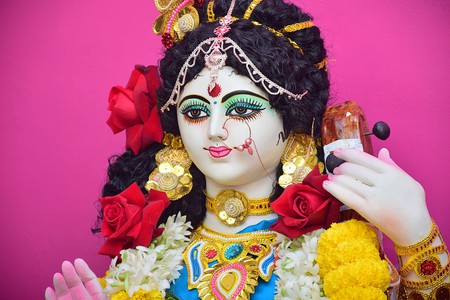 In Kerala, goddess Saraswati is worshipped during Navaratri | © সৌরদীপ / WikiCommons
Give us feedback