With the influx of Uber, Ola, and other private cab aggregators over the past five years, Mumbai’s iconic Kaali Peeli (black and yellow) cabs have suffered from a massive hit on business. Technologically edgier and accompanied by smartphone applications that increase their accessibility to users, the new wave of private cabs have made historic Kaali Peelis seem outdated and clunky. However, with the launch of a new app, Aamchi Drive, Kaali Peelis are all set to catch up with the times and toughen their competition with counterparts.

Aamchi Drive works much like any other cab aggregator app, and lets users book black and yellow cabs in their vicinity from the ease of a smartphone. Payment options include popular e-wallets such as Mobikwik and Paytm in addition to cash. First-time users are also guaranteed cashback offers on their first three rides with the app if e-wallets are used for payment. The lack of choice when it comes to paying Kaali Peeli cabs has always been one of the prime reasons users have taken to alternate cab services in the city—something Aamchi Drive is set to tackle.

Mumbai's favourite Kaali Peeli cabs have finally come of age. Presenting, Aamchi Drive, the official app of the classic Mumbai taxi. Now hailing your favourite taxi is about as simple as pushing a button. What's more, with integrated mobile wallets, exciting cashbacks, no surge-pricing and many more features, Aamchi Drive is all set to become your favourite way to travel. What are you waiting for? Download now! Android: http://bit.ly/2s0GAhn | IOS: http://apple.co/2tWqGGg

Available in Hindi, Marathi, and English, the app offers users options to book air conditioned cabs at the rate of Rs 28 for 1.5 kilometers and Rs 18 for every kilometer that follows, or non-air conditioned cabs which will cost Rs 22.15 for the first 1.5 kilometers and Rs 14.84 for every kilometer after. Unlike with most other cab aggregators, users will not be subject to surge pricing with the app. 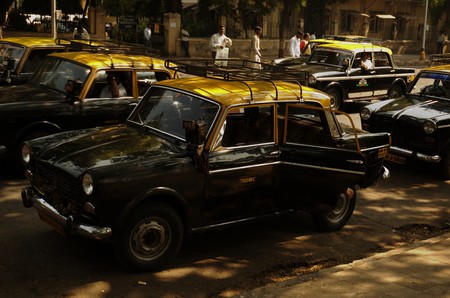 Developed by a Bengaluru-based IT firm for the Mumbai Taximen’s Union and Mumbai Taxi Association, the app was launched by the state of Maharashtra’s transport minister, Diwakar Raote. At the time of launch, the app had already tied up with about 2,000 cabbies in the city, all of whom have been trained in its usage.