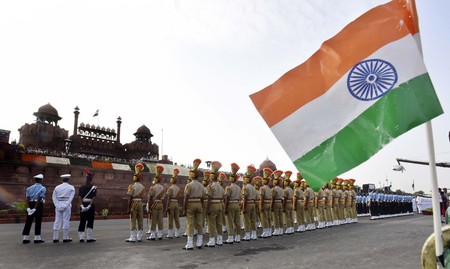 Every year on 15 August, the streets of India are adorned with the tricolours of the national flag as the country celebrates its day of independence.

In the weeks leading up to 15 August, landmarks and government buildings are lit up in the country’s national colours. Shops, malls and houses are decorated in similar colours, and shopkeepers can be found selling flags, dupattas (lengths of fabric) and kites for the occasion. Documentaries, patriotic films and programmes related to India’s freedom are aired on TV channels to get people into the spirit of Independence Day.

After 200 years of British rule, India officially gained its independence on 15 August 1947. On this day, Jawaharlal Nehru, the first prime minister of independent India, hoisted the Indian national flag above the Lahori Gate of the Red Fort in Delhi and addressed the nation, marking the start of a tradition that continues today. 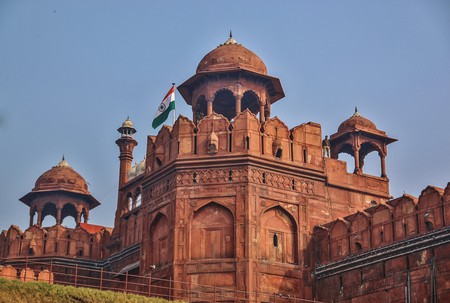 What led to Indian independence?

The British East India Company first came to India in 1617 to facilitate trade between Mughal India and England. The traders slowly seized control of India, helped by the fact that the country was divided into sub-territories with multiple local rulers. The British employed a ‘divide and rule’ approach, pitting powerful local maharajas against one another, and by the 1850s had almost total control of the country.

India fought many hard battles against British rule, but what started the real freedom fight was the Revolt of 1857, also known as the Indian Mutiny, when Indian soldiers nationwide revolted against British commanders. It was the first large-scale rebellion against the British East India Company and posed a considerable threat to British power in India. Although the revolt was unsuccessful, it led to the British Crown taking control away from the East India Company. Many protests were held against the exploitation that followed by the British Empire, including the Gandhi-led non-violent resistance and civil disobedience movement.

A day marked with a whirlwind of celebrations

Although celebrations take place throughout the country, India’s capital city, Delhi, home to the 17th-century Red Fort that used to serve as a political centre, is the main staging area for Independence Day festivities. 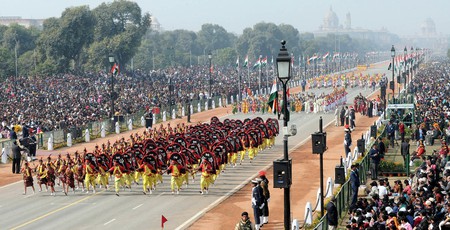 On the eve of Independence Day, a national holiday, the president of India delivers an address to the nation from his office that is broadcast nationally. On the morning of 15 August, the celebration kicks off with the arrival of the prime minister of India who receives a general salute from the guard of honour, which consists of representatives from the three wings of the Indian armed forces (army, navy and air force) and the Delhi police.

The main event begins with the hoisting of the national flag by the prime minister, which is synchronised with 21 honorary gunshots and followed by a moving rendition of the ‘Jana Gana Mana’ (India’s national anthem). To remind his or her people of the country’s struggle for freedom, the prime minister addresses the nation and reminisces on the events leading up to India’s independence and ends the speech with a note about the country’s future.

Later in the day, celebrations include patriotic parades and pageants focussed on honouring the freedom fighters, a march-past led by the Indian armed forces and paramilitary forces and performances by schoolchildren. 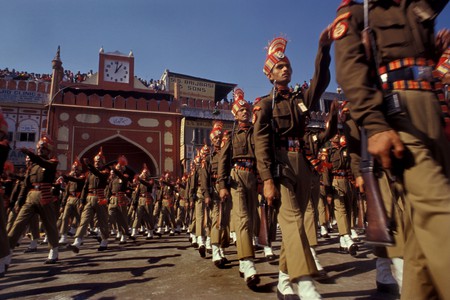 Similar events are held across the country. The chief minister of each state capital unfurls the flag while the national anthem is sung. Government and non-government institutions, schools, colleges and housing societies also have flag-hoisting ceremonies and cultural programmes that capture India’s diversity. Patriotic songs are played through loudspeakers all day.

In the northern and central cities of India, kite flying is considered to be the day’s main festivity, as it is associated with a spirit of freedom and joy. In 1927, Indian revolutionaries and freedom fighters flew kites with the slogan ‘Go Back Simon’ as a mark of protest against British rule. Since then, kite flying has become a tradition. Kites of different sizes can be seen soaring high in the sky in the colours of the Indian flag, either for fun or as part of a competition. 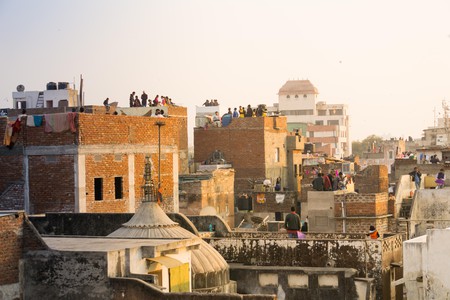 Also on this day, a special Beating Retreat ceremony is held at the Wagah Border in Amritsar. It features sword fighting and cultural dances, the ceremonial closing of gates, a parade and a lowering-of-the-flags ceremony.

How is Independence day celebrated in schools?

Independence Day is a national holiday in India, and as such all schools close for the day. Celebrations vary from school to school, but most schools will hoist the colours of the national flag. Primary schools will also get into the spirit by decorating their classrooms and performing plays for fellow students or reciting patriotic poems. Since the day is a holiday for all, most people choose to spend this time with their loved ones and celebrate as they see fit.