How Hindus Across India Celebrate the Krishna Janmashtami Festival 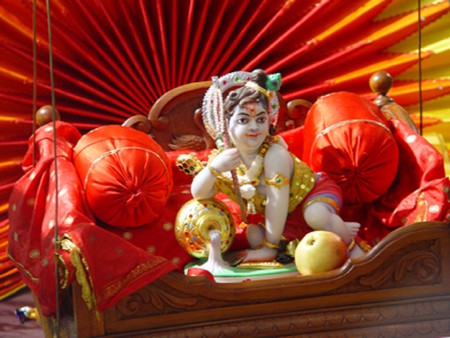 The Krishna Janmashtami festival, popularly known as Janmashtami, is celebrated across India and marks the birth of revered Hindu deity Krishna, the eighth incarnation of Lord Vishnu.

Conforming to the Hindu lunar calendar, Janmashtami is observed on the eighth day (Ashtami) of Krishna Paksha, or the waning moon, which usually falls in August or September. It is celebrated across the country, but the festivities in Maharashtra, Gujarat and Uttar Pradesh (especially Mathura and Vrindavan) are particularly grand.

Celebrations include dance-drama enactments of the life of Lord Krishna, prayers, night vigils and fasting. The gaiety of the festival is accompanied by cultural events and competitions, the most interesting being Dahi Handi (breaking a pot filled with yoghurt). 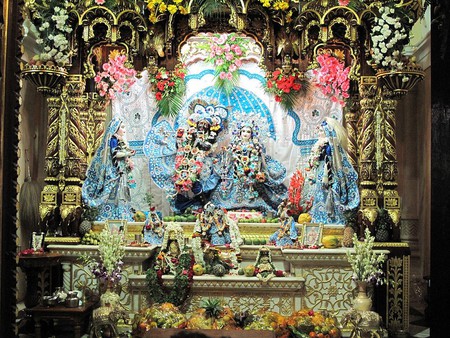 Like every other festival in India, the origin of Janmashtami is associated with a famous legend. According to myth, there was a time when Hindu deity Bhumi Devi (the goddess of earth) prayed to Lord Vishnu to help rid her of evil rulers. One of them was Kansa (in Mathura). Vishnu promised Bhumi Devi that he would reincarnate himself in human form to destroy those inflicting pain upon her and others.

Kansa had a sister named Devaki, who was married to Vasudeva. The day they got married, a heavenly voice predicted that the eighth son of Devaki would kill Kansa. Frightened by this ominous prophecy, Kansa imprisoned the couple and killed six of their children. The seventh child (named Balrama), however, was saved due to divine intervention.

And when the eighth child – Krishna– was born, he was believed to be an avatar of Lord Vishnu (the preserver and protector of the universe). The doors to the prison opened and Vasudeva’s chains fell off magically. In order to protect his son, he gave him to Nanda, his friend who lived in Gokul. From that point onward, Krishna was raised by his foster parents, Yashoda and Nanda. Years later, Lord Krishna killed Kansa and the other evil kings. Janmashtami is a celebration of this legend and marks the victory of good and the destruction of all things bad. 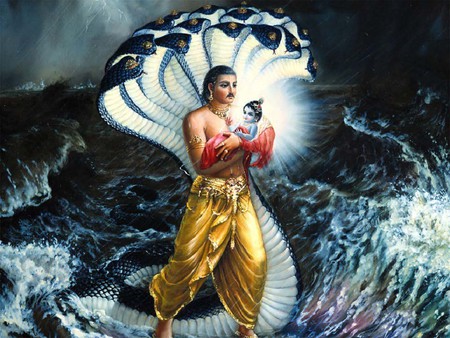 To save Krishna from his evil uncle Kansa, Vasudeva took him to his friend, Nanda | © Abhi Sharma / Flickr

Festivities take place over two days as Krishna was born at midnight. The first day is known as Krishna Ashtami, or Gokul Ashtami, and is usually observed with fasting, followed by a traditional prayer leading up to midnight. The second day is called Kaal Ashtami, or Janam Ashtami, which involves recitals, dances, devotional songs, and feasting.

Although this day is popularly known as Janmashtami, the nomenclature varies from place to place, as do the corresponding rituals. The northern India state of Uttar Pradesh is the best place to experience the grandeur of the event – and more specifically, Mathura, which happens to be the birthplace of Krishna, and Vrindavan, where he is believed to have grown up.

Here, the celebrations span across weeks. In the days leading up to the festival, temples are brightly decorated, pandals (temporary tents) are set up, and Raslila performances (a folk dance-drama depicting important scenes from Krishna’s life) take place. The idols of Krishna are anointed with milk, honey and curd in a ceremony called Abhishek, following which the statues are then adorned in new clothes and jewellery and placed in beautifully decorated cradles. In the background, people are heard chanting hymns and prayers. 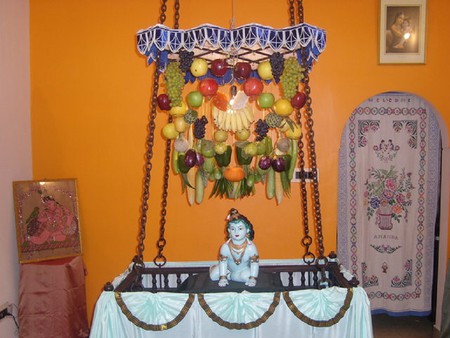 As part of Janmashtami celebrations, Lord Krishna is placed in a beautifully decorated cradle with a thread tied to turn it into swing | © Nvvchar / WikiCommons

Locals continue the celebrations by offering chappan bhog (56 dishes) to the god and by partaking in the Dahi Handi ritual (explained below).

These rituals can be witnessed in any of the temples spread across these cities. However, the Shri Krishna Janmabhoomi and Dwarkadheesh temples in Mathura and the Banke Bihari, ISKCON and Radha Raman temples in Vrindavan take the celebrations to the next level with extremely grand decor and elaborate ceremonies. 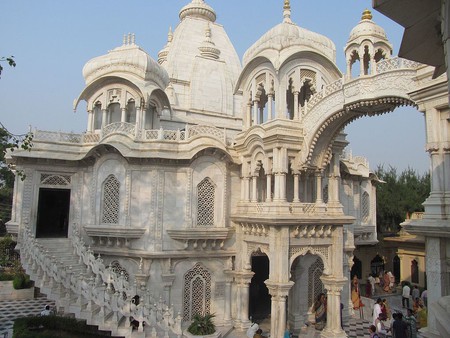 The state of Maharashtra also goes big during Janmashtami, especially the cities of Mumbai and Pune. Popularly known as Gokulashtami here, the highlight of the festival is the Dahi Handi ritual, which is a re-enactment of and a tribute to Lord Krishna’s love for butter and curd. This is where the earthen pot is suspended high in the air (about 20 to 30 feet from the ground) and a group of young men called the govindas form a human pyramid in an attempt to crack the pot and spill the yoghurt. This yoghurt is then offered to everyone as prasad. Spectators gather around the govindas, cheering them on and sometimes even throwing buckets of water to make the task of climbing more challenging.

Various teams compete with each other to break the pot and the winning team is rewarded with a cash prize, which can go up to hundreds of thousands of rupees depending on the sponsors of the event. This ritual is held at hundreds of locations across the city, and at some places even Bollywood celebrities make appearances. 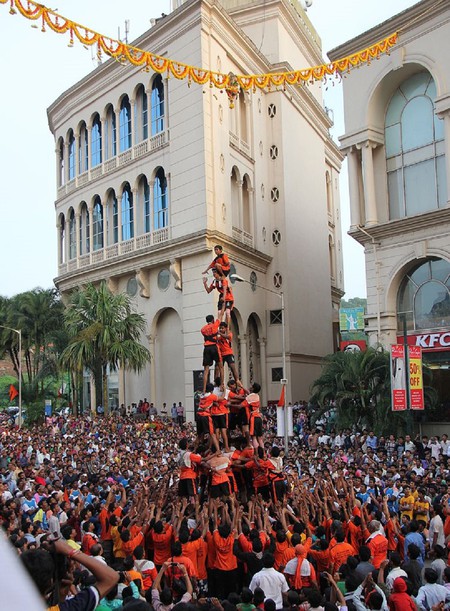 The city of Dwarka in Gujarat celebrates with full gusto as well. Also called as the City of Lord Krishna, the Dahi Handi tradition here is similar to that in Maharashtra, except here it’s known as Makhan Handi (a pot with filled with churned butter). Night-long celebrations begin in advance, including a garba dance, recitation of devotional songs and Raslila performances. Fasting is also quite common. The most beautifully decorated temple that attracts admiring crowds from across the country is Dwarkadhish, dedicated to Lord Krishna. The must-attend part of the celebrations is the mangal aarti, which is performed in the morning. 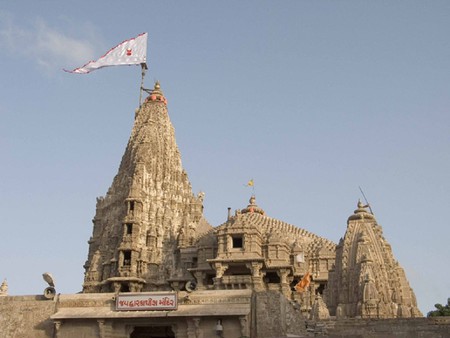 Dwarakadheesh temple is said to be more than 2000 years old. | © Scalebelow / WikiCommons

In South India, the celebrations differ from those in the north. For instance, in Tamil Nadu, people draw beautiful decorative patterns called kolam, made with rice batter on the floor, and footprints of Krishna at the entrance of their house. In Andhra Pradesh, young boys dress up as Krishna and visit friends and neighbours. Fruits and sweets are first offered to Krishna and later distributed among people. Fasting and recitation of sholkas (Sanskrit verses) and devotional songs are also common practices. 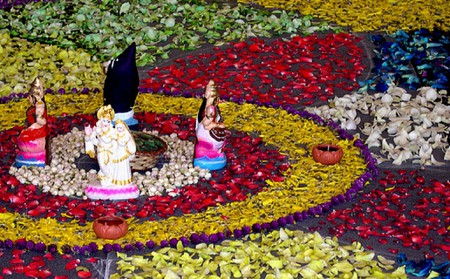 In the eastern states of Odisha and West Bengal, the Hindu festival is referred to as Sri Krishna Jayanti, or Sri Jayanti. People celebrate it with fasting and by reciting the tenth chapter of the Hindu scripture Bhagavata Purana until midnight. The following morning kicks off with a celebration of Krishna’s foster parents, Nanda and Yashoda. The day is called Nanda Utsav and people offer chappan bhog to the god, following which they break their fast.

In Manipur, the celebrations are characterised by fasts, recitation of scriptures, vigils, the Raslila dance and visits to the famous ISKCON and Shree Govindajee temples. 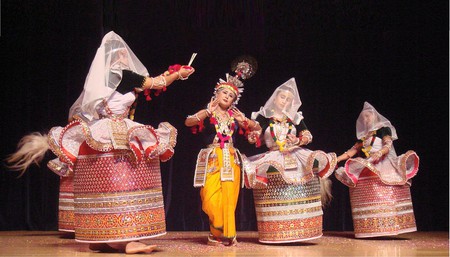 In addition to India, the festival of Janmashtami is celebrated in Nepal, Bangladesh, Pakistan, Fiji, Trinidad and Tobago, Guyana, Singapore and some parts in the USA.