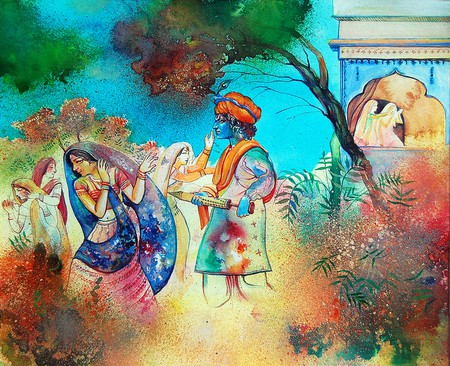 Of all the Indian festivals, Holi is probably the most famous around the world. The festival of color, Holi is when all Indians, irrespective of religion, caste, sex, social status, come together and celebrate like one big family. Being as big a country as India is, it is natural that customs vary from part to part. Holi is celebrated differently in different states, though the flavor remains the same. Here we explore how this festival of colors, which is believed to bring the entire nation together, is celebrated across the country.

North India is not as calm when it comes to festivities as the rest of India is. Here, festivals are celebrated with full gusto. The cities of Mathura and Vrindavan, which have special significance in the life of Lord Krishna, celebrate the festival over many days. At other places, it is usually a two day affair. On the first day, the ceremonies take place at night. Pieces of wood, hay, and twigs are brought together and piled roughly in the shape of a hut. It is set on fire and people circle the burning pyre, worshipping it. In Haryana, men form a human pyramid by climbing on top of each other, and the person on top tries to break a pot hung high up. Meanwhile, about 40 kilometres from Mathura is the birthplace of Radha, Barsana. Every year, men from Nandgaon (where Lord Krishna grew up), go to Barsana. The idea is to raise their flag on top of the Shri Radhikaji temple. However, the women of the village greet them with sticks instead of colors. Hence the name, Lathmaar Holi. There ensues a mock battle followed by singing and dancing. The very next day, men from Barsana go to Nandgaon where they get similar treatment from the women of that village – followed by much fun and frolicking. 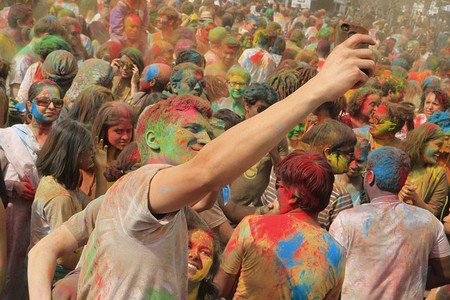 Legend has it that there was once a demon king called Hiranyakashyap. He had a sister named Holika and a son, Prahlad. Hiranyakashyap wanted to be immortal so he carried out an extremely difficult task so Lord Brahma was forced to grant him wishes. Since the Lord didn’t want such an evil man to remain immortal, he twisted his boon. Once the wish was granted, the demon king became arrogant and wanted himself to be worshiped. His son Prahlad didn’t agree and went on worshiping his Lord Vishnu. Angry, the demon king tried to kill his own son, but to no avail. Finally he called his sister for help. Holika had a cloak which could prevent her from any kind of harm from fire. The king made her sit in the bonfire, with Prahlad in her lap and the cloak around her. She didn’t know that the cloak wouldn’t work if someone else was under it too. Once inside the pyre, Prahlad kept praying to Lord Vishnu who saved him but Holika burnt to ashes in the pyre. Since then, this is done to symbolize the winning of good over evil. 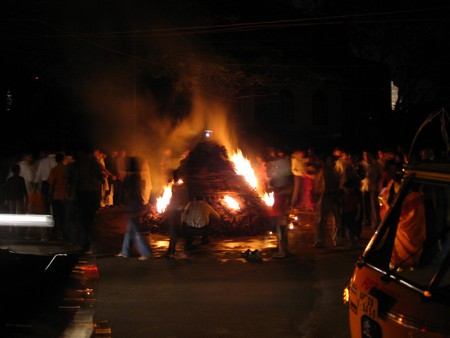 Holi is known as Dolyatra in West Bengal. It is the last festival of the Bengali calendar and is very special. On this day, the legend of Krishna and his Radha are celebrated, for it is believed that it was on this day that Lord Krishna expressed his love to Radha. A comparatively mellow celebration in comparison to north India, Bengalis play Holi with dry colors, mainly. After puja in the morning, dry colors (gulal) which are called abeer in Bengali are offered to photographs of deceased family members and then elders give blessings to the younger ones. The festival is celebrated in a very dignified manner, where Radha and Krishna idols are decorated and seated on swings on palanquins. The palanquin is then taken around the streets and devotees get a chance to swing the beloved idols.

In Odisha, traditions are similar as in Bengal except that here idols of Lord Jagannath are worshipped and placed in the swings, instead of idols of Radha and Krishna. Holi is a six-day festival in Manipur and begins on the day of the full moon of the month. Similar to Holika Dahan, a hut is made of straws and twigs and set on fire. The next day, boys and girls play with colors. There is a lot of music, plays and musicals, apart from other cultural festivals. 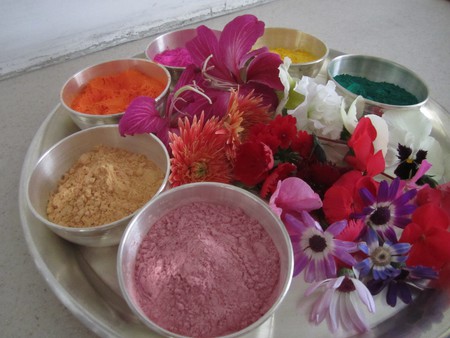 Holi celebrations in south India are relatively low key in comparison to the other parts of the country. While the usual celebrations with colors happen here as well, the legends are different here. In Tamil Nadu, the legend revolves around Kamdev. Despite the fact that the festival is not celebrated in this part of the country much, India is a diverse country. Many people from other parts of the country have settled here and they bring with them the colors and enjoyment of the festival.

In Maharashtra, Holi is called Rangpanchami or Shimga. Like in north India, people play with colors on the fifth day of the festival. Holi is widely celebrated amongst the fishing communities in Maharashtra and involves singing and dancing. Legend has it that on the day of Rangpanchami, Lakhooji Jadhav’s five-year-old daughter Jijabhai innocently threw some colors and colored water on the son of Malajirao Bhowale. Considering it an auspicious action, the children were engaged and later got married. Both had a son, who grew up to become the great King Shivaji.

In Gujarat, Holi is a harvest festival and all of the first day is spent fasting. In the evening, the bonfire is lit. The bonfire marks the end of winter as well as victory of good over evil. In the bonfire, people offer coconut, sugar toys, corn, and other treats. The next day, people play with dry colors as well as colored water.