History In Your Backyard: A Walkabout Of Ulsoor Lake 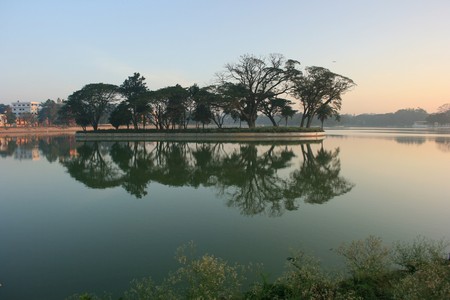 What makes a perfect Sunday? Meeting friends, chatting and laughing over a lazy, late brunch, and reminiscing about the good old days, perhaps? How about, as an additional perk, a leisurely walk along historical, but lesser known, sites of a great city. Sounds like a winner, right?

A walk along the quiet Ulsoor Lake and its historical neighbourhood on Sunday, February 7th, 2016, explored the blending of the many cultural influences that make Ulsoor Lake a landmark. Organised by Christina and Jatin, two enthusiastic writers and culture buffs, the walk mixed cultural discovery, the exchange of thoughts and ideas, and an appreciation for a city’s longstanding heritage.

The walk commenced with a quick view of the beautiful sunrise at the Ulsoor walkway gate, before moving on to one of the oldest cultural centers in the neighborhood — The Begali Association. The leader of the tour — the knowledgeable Christina, who provided live commentary — explained the formation of the association library in the 1950s, before it moved into the present building in 1973. The building retains design cues of that era, like the Monkey Top Roofs. During Durga Puja, the association becomes the hub of cultural activities for the city’s Bengali community.

The next attraction was Narayana Samiti, a memorial built for social reformer Narayana in Kerala. The Maha Ganapthi temple stands next to it and is one of the very few south-facing Ganapthys in the city.

It is said that Ulsoor Lake dates back to 1537, when Kempe Gowda II founded the city and established one of his watchtowers there. Later, the lake, and the village of Ulsoor, became part of Hyder Ali’s zaagir. In 1600, the Wodeyars of Mysore bought it from the Mughals. Later the British wrested control of Bangalore from Tipu in 1798 and handed it back to the Wodeyars. After an understanding with the Wodeyars, the British began reinforcing it as a cantonment and laying railroads, building the town in a planned manner around the lake.

Ulsoor was the centerpiece of the cantonment town that the British built. All the important offices, courts, hospitals, and bazaars were built around the lake. The British even created separate neighborhoods for the working class — mostly of Tamil laborers who, through their own enterprise and trade, enriched the community. Lovery tiled bungalows with spacious verandas and circular or floral skylights sprung up on the lanes bordering the lake, adorned by bougainvilleas and Gulmohars. Shady, tree-lined avenues and the cool breeze made the town a joy to live in, especially during the long Indian summers. 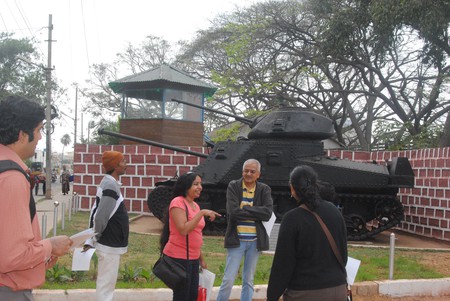 Walkers look at one of the WWII tanks brought back from Africa by MEG. | Prabuddha Jagdep

Crossing the road brought the walkers to the Stuart Tank, a war memorial brought from North Africa by the Madras Engineering Group (MEG) during World War II. Several such tank replicas dot the neighborhood and serve as reminders of the bravery and resourcefulness of the men in uniform who have been stationed at Ulsoor Lake since the 1870s. The military establishment dominates the neighborhood with its watermanship, rowing, and boating facilities. The islands on the lake and some roads take their name from famous battles fought by the MEG.

Many of the engineers and generals from the cantonment have actually had roads, townships, and monuments named after them. One such personality was Richard Sankey, who had the Sankey Tank named after him and who designed many landmarks, like Cubbon Park, Town Hall, and St Andrew’s Church.

The lake is the centre of activity. In the mornings, Dhobis from the nearby Dhobi Ghat wash clothes brought from the cantonment on the lake banks. A short distance away, pensioners fill the Red Cross society campus to collect their pensions and get treated at the hospice. In the lazy afternoons, adventurous school boys from many of the nearby missionary schools take row boats and fill the lake with raucous songs and merry making as they go about rowing and smoking. In the evening, the bustling Anglo-Indian community gets out to party in flowing bell bottoms — the latest fashion-wear — with musical instruments in tow. 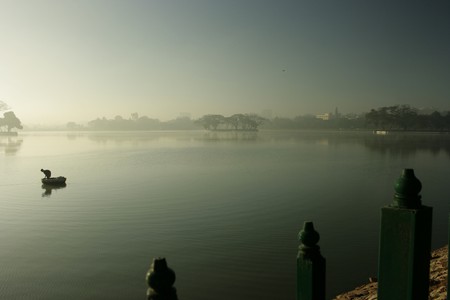 The Tamil community also prospered along with the growth of this habitation. Rai Bahadur Naraiyanaswamy Mudliar, a small-town boy from Arcot, migrated to Bangalore and made his fortune. A businessman and contractor credited with building the High Court, he contributed heavily to charity and established what was then the first school for the Indian community — RBANMS High School — and an orphanage. The academy has grown and is now a full-fledged college with its own grounds and old-era architecture. 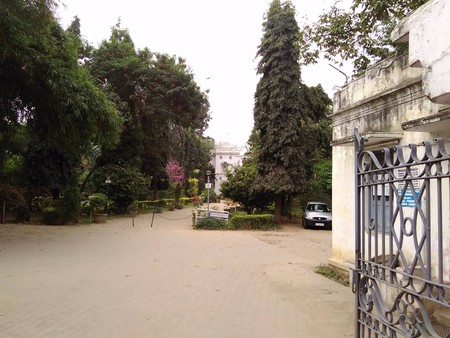 The relaxed, laid-back comforts of Bangalore also draw visitors from abroad. A small palace which once belonged to the Nepalese King as a summer home stands on banks of the lake. After independence, however, the house came into the hands of the Aurobindo Society, which runs an information centre and a school. The building, almost untouched by time, still has its many architectural features intact, like wooden staircases. The property also has a beautiful garden, dotted with sculptures and fountains.

After soaking in so much information, the walk culminated with a sumptuous breakfast at Urban Solace — a café-cum-cultural-hot-spot on the lake banks, and participants agreed to meet up again and explore many of Bangalore’s little known historical and cultural facts in the future.