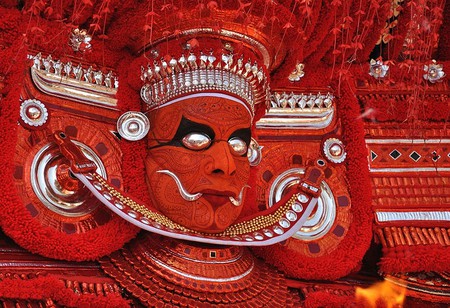 Every culture and religion has traditions seemingly normal or taken for granted by followers but unusual and fascinating for outsiders. India, with its overwhelming cultural diversity, is rich with unique traditions that almost always amuse. Here is a list of ten unique traditions followed by Hindus from different parts of the country – from bizarre and truly unique festivals to unusual daily traditions.

Aadi Festival, where devotees smash coconuts on their heads

The 800-year-old Mahalakshmi Temple in Karur district of Tamil Nadu is host to a peculiar tradition during the Hindu Tamil festival of Aadi. The priest at the temple breaks coconuts on the heads of willing devotees who believe they will have their wishes granted by doing so.

Theemithi, or Thimithi, is a fire-walking ceremony observed in parts of Tamil Nadu involving devotees walking over a pit filled with burning hot wood. Most devotees who partake in this ritual are male, and at most times they do so with a pot of water or even milk balanced on their heads. It is meant to serve as an opportunity for people to express, prove, reaffirm and even test their faith.

In one of the later stages of preparation for the annual #Thimithi festival, devotees circle the fire-walking pit, jabbing at it to break up the final layer of wood. See the full photo essay on channelnewsasia.com. (📷: Sherlyn Goh)

Theyyam, or the dance of the gods

Called ‘the dance of the gods’, the Theyyam in Kerala involves the performance of a dance and various rituals by certain locals who are at the time of Theyyam considered to be possessed by a certain god. Considered thousands of years old, this ritual is performed in local shrines and sometimes at various households. The rituals vary from village to village, with blood sacrifice by the public butchering of a rooster being a common practice.

this is one of my favourite shots from this year – taken during a spiritual ceremony called Theyyam in south India. those guys were totally in trance and dancing through fire while worshipping their ancient gods. such a great experience. 👹 #incredibleindia #spiritual #life #traveler #mystic #dancer #adventureisoutthere #justgoshoot #wanderlust #reiselust #fernweh #canonlove #photooftheday #exclusive_shot #35mm #passion #intense #look #liveauthentic #documentary #theyyam #iloveadventures

Dropping infants from the roof for good luck

Observed in a handful of places around the country is the controversial and terrifying ritual of dropping infants from a height of 50 feet onto a cloth held by a few men at the bottom. Practiced by both Muslims and Hindus, the ritual is supposed to bring good fortune to the baby. The ritual, considered to be more than half a century old, is practised most famously at the Baba Umer Dargah in Solapur, Maharashtra.

Nag Panchami is a Hindu festival celebrated by the worship of snakes observed in some parts of the country.The village of Baltis Shirale near Mumbai is said to host one of the grandest snake worship ceremonies in the country, boasting of visitors coming from around the world to witness and pay respects. The ceremony varies around the country, with live snakes being worshipped in Bengal, Assam, Orissa, etc., while in Punjab a huge snake shaped from dough (made out of flour and butter contributed by the entire village) is taken to each household in the village after which it is publicly buried.

Seen mostly in rural Meghalaya, Assam, Maharashtra, and Karnataka is the rather unusual ritual of marrying animals – mostly frogs – in order to please the rain gods. The weddings take place in much hyped public ceremonies. Weddings are also arranged between dogs or donkeys! Practitioners believe that the wedding ceremony will bring in monsoon.

The Dahi Handi ritual, which is widely organized during the Hindu festival of Janmashtami, involves organized groups of mostly young people climbing atop each other to form human pyramids aiming to reach and break a pot of butter suspended at a height of 20-40 feet. It is considered to be a re-enactment of Hindu deity Krishna’s childhood when he gathered his friends to form similar pyramids to steal butter stored at heights above his reach.

A lot of major Hindu festivals in the country are celebrated by households, temples, and offices getting custom-made idols of various gods which they honour with various rituals over a span of day. The festival then comes to an end with the idols getting immersed in a nearby body of water. From Ganesh Chathurthi to the Durga Puja festival, this is a much hyped practice in some parts of the country. The practice usually signifies purification and welcoming a new start.

Also known as Agni Keli, this ritual in Mangalore has hundreds of Hindu devotees throwing burning palm frond torches at each other with the belief that doing so will appease the goddess Durga. Split into two groups, the partakers, usually men, throw burning palm frond torches at the opposing group from a distance of about 10–15 meters, aiming to hit as many opponents as possible. Anyone who gets a burn gets sprayed with water.

Eating on the floor

You will find that most temples in the country, particularly in South India, serve meals to visitors on the floor. Hindu devotees sit on the floor cross legged with their plates (or banana leaves if in the southern half of the country) out of which they eat. This pose is said to maximize the body’s digestive abilities, but also signifies the importance of humility and equality to most worshippers. This is also a common practice in many households particularly in rural India.