Here's How Goa is Trying to Conserve Its Turtle Nestling Beach 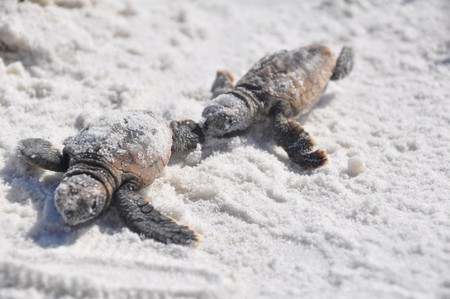 Expanding tourism across India’s coastal state, Goa is hampering the natural activity of its native wildlife. Goa’s turtle, the olive ridley turtle, has a nesting season that runs alongside Goa’s peak tourism season. Due to a surge in tourism in 2016 on Agonda Beach, one of Goa’s four main turtle beaches that have reaped havoc for turtles, pressure was put on local authorities to take immediate action. Thankfully, they responded and a number of interventions were taken to protect the ways of these beautiful creatures.

Four of Goa’s many stunning beaches are turtle nesting sites, the two most popular being Galgibag and Agonda, both in South Goa’s Canacona district. Each nesting season, which usually runs from November to March, turtles can be spotted clambering up the white sand beaches and depositing their eggs. Observing a turtle laying eggs is an incredible and unique experience that many visitors to Goa are keen to see and up until recently, little was being done to ensure that this was being monitored to protect the turtles. Fires on beaches, bright lights and flash photography are all behaviours that come from beach tourism and that are hazardous to turtles who are incredibly sensitive to disturbances. 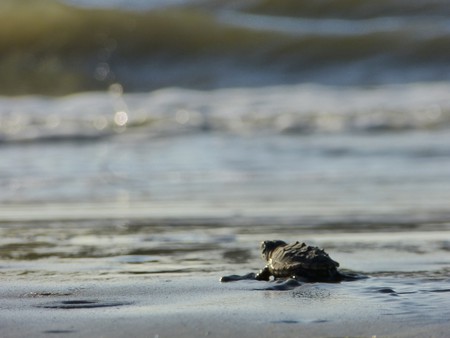 When the eggs hatch, the baby turtles make their way to the sea | © U.S. Fish and Wildlife Service Southeast Region/Flickr

Agonda Beach is one of the turtles’ preferred beaches. In the past three years, tourism in Agonda has shot up and as such, rapid and extensive development has appeared to take advantage of the beach’s new-found popularity among foreign and national visitors. During Goa’s tourist season in 2015-2016, Agonda experienced the most tourists to date. It also experienced a decline in the number of turtle eggs being laid. Since interest in Agonda has perked up, locals and authorities, including Goa’s forestry department, have been locked in a debate over what should take precedence; tourism (which generates jobs for locals and boosts local economies) or turtle conservation. It has been reported that while the majority of locals would rather see their beach be a hub for tourism, local authorities and NGOs are vying for the beach to be reserved as a ‘Turtle Rehabilitation Centre’.

It is believed that conservation for turtle nesting began in Goa as recently as the late nineties when the forest department joined forces with the locals. Nesting pits were created and locals were employed to keep watch around the clock to stop people stealing eggs or stray dogs from trying to eat them. ‘No-development zones’ were put in place on the beaches by local authorities along with stricter regulations relating to the building of beach structures. The north side of Galgibag Beach, for example, was made a ‘completely protected turtle zone’ meaning no developments or structures are allowed to be built. 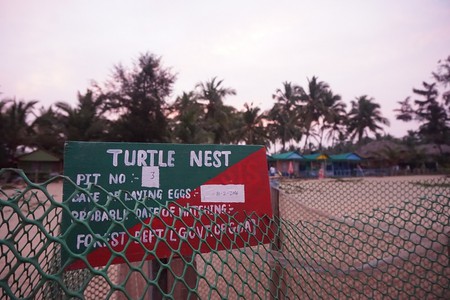 The number of turtle nests have increased in Agonda and locals and NGO members volunteer to keep watch of eggs during the night. Development has been restricted in some areas of the beach and beach fires have been stopped, along with loud music during this year’s tourism season (2017-2018). Agonda has witnessed as many as four visits from turtles, laying up to 123 eggs per visit. Each time, the eggs were collected by local NGO workers and professional conservationists and transported to designated protection zones where they can be watched over until the hatchlings are ready.

If you are planning a visit to one of Goa’s turtle nesting beaches, here’s what you can do to help protect the turtles!

• Find out who the local designated person is in charge of turtle conservation on that particular beach. This can be done by looking out for the designated turtle protection zones.
• Enjoy the experience without taking photos. As female turtles lay their eggs on the beach at night, flash photography would be needed to capture it on camera. Bright or flashing lights cause much disorientation to the turtles and should be completely avoided.
• Always stay behind their front flippers and away from the turtle’s head and be sure to speak softly and move slowly as not to startle her.
• Don’t attempt to touch the turtle or the eggs, even after the turtle has gone. Handling of turtle eggs should only be done by those trained to do so.
• Be sure to leave the turtle plenty of space, don’t crowd her or make quick or sudden movements.