Harmandir Sahib: The Golden Temple With A Golden Story

India has many places of significant religious importance, which over a period of time have turned into popular tourist destinations. One example is the Harmandir Sahib, fondly known as ‘The Golden Temple.’ Located in Amritsar, it is the most sacred and divine Gurudwara, which is visited not only by Sikhs but also by people from all over the world. Let’s explore the glorious history and some intriguing facts about this dazzling shrine.

In the year 1570, the third Guru Sahib launched the plans of excavating a holy tank (the name Amritsar was derived from this) and building a town settlement in the area. The fifth Guru Sahib of Sikhs conceptualized a central place of worship; he designed the structure and initiated the construction in 1588. The architecture and layout are symbolic of the openness and accessibility to every individual irrespective of their religion, caste or gender. Over the next few decades, the temple was attacked a few times and suffered damage, which was fixed eventually. The temple complex was further developed by the sixth Guru Sahib, under whose supervision the Akal Takht was constructed. Maharaja Ranjit Singh was the person who took the initiative of bedecking the gurudwara. With his generous contribution and support, the gold plating was completed in the year 1830. 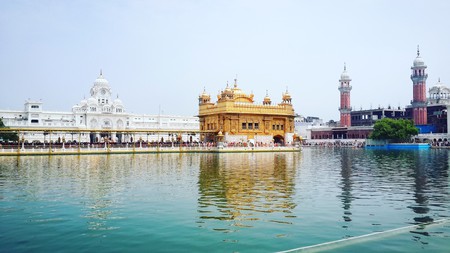 The white main gate, community kitchen on the left and the magnificent golden temple in center of the holy tank | © Darshita Thakker

The temple complex is located in the heart of the city, surrounded by narrow lanes and a busy market area. Unlike most temples, the Sri Darbar Sahib has four entrances in each direction, a sign of welcoming anyone who wants to visit. Along the main gate is the peripheral building, which runs along the entire complex, and houses various dormitories, dining halls and administration offices.

In the middle of the external structure is an artificial body of water known as the Sarovar. The water is believed to have sacred healing powers; stories of how people are healed from their ailments are etched in the walls around the tank. In the center of this body of water is the ravishing gurudwara, connected by a causeway, which works as the waiting area for people waiting in the queue to enter the main temple.

The inside of the three-story house of God is heavily ornamented with a large quantity of gold and precious stones. The Guru Granth Sahib, sacred scriptures of Sikhism, is placed here and read throughout the day along with other hymns and musical instruments. The marble flooring has intricate inlay work and carvings, whereas the walls and the ceiling are completely studded with precious metal and stones. The Akal Takht was built and used to deal with temporal issues and is considered the highest designation of earthly authority.

Guru Ka Langar (the community kitchen) is one of the biggest of its kind in the world. Hundreds of volunteers cook meals, which are served to close to 100,000 pilgrims daily. The kitchen has an enormous dining area attached where pilgrims sit in multiple rows and eat together without being discriminated on any grounds. There are also several spots depicting important historical events. A couple of trees, which date back to the 18th century, are preserved along the parikrama. 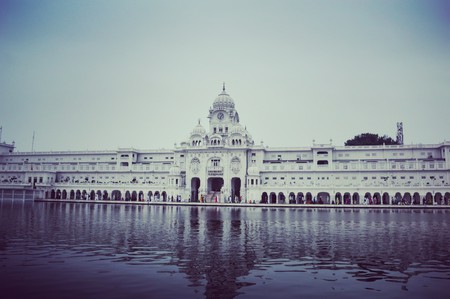 The Golden Temple acts like a self-governing body retaining a management committee, priests, supervisors, volunteers, etc. There is a strict observance of a series of rituals followed on a daily basis. The temple is open to visitors round the clock except for four hours at night, which is the time used for cleaning the shrine. 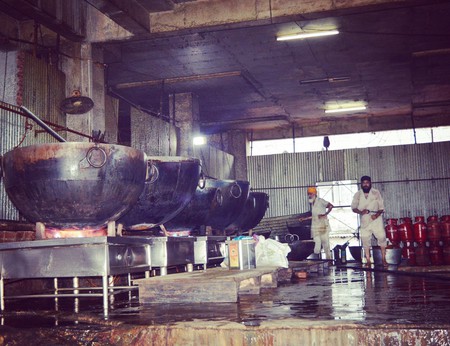 Every day around 10:30 pm, the scripture is carried out in a golden palanquin from the gurudwara to the Akal Takht (which is the resting place). Before the break of dawn, the holy book is carried back by the Sikh Gurus and pilgrims and reinstalled inside the Harmandir Sahib. Thousands of people gather to witness the recital of the first thought of the day, also known as the ‘hukamnama.’ As the day goes by, the rituals and recitals continue in an orderly manner, and the holy offering, ‘Karah Prashad,’ is distributed among the devotees. 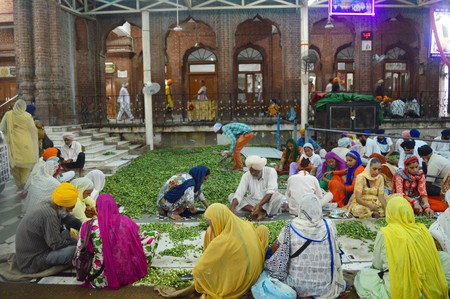 The Langar (community kitchen) is functional round the clock where hundreds of volunteers prepare and serve wholesome meals which are free of cost. In exchange, people make donations or offer to help around the kitchen or the temple, all of it being completely optional. If not the kitchen, devotees come forward to help with the cleaning work or at the shoe counters at the entrance. 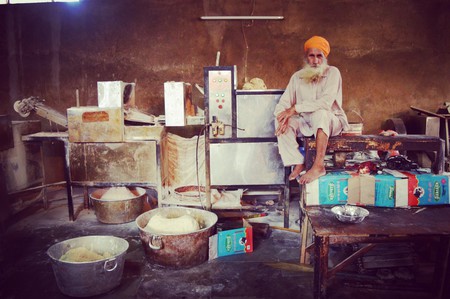 An automated roti machine which rolls out over 100,000 rotis a day | © Darshita Thakker

The Harmandir Sahib is open to everyone regardless of caste, gender, social status, nationality or any other biases. However, there are a few rules that have to be followed while visiting the temple. The approaching roads to the area are closed for vehicles, so you will have to walk through the busy market area for a few minutes. On reaching the main gate, footwear and large pieces of luggage have to be deposited at the counters in exchange for a token. Everyone needs to be dressed decently, cover their head and wash their feet as a sign of respect to God before entering the complex. Scarves and bandanas are provided at the gate or available for purchase at the nearby stores.

On entering the complex, the melodious hymns and devotional songs can be heard while visitors take time to walk around the holy tank. Pilgrims take a dip in the divine body of water that is believed to have nectar with healing powers. There are facilities to shower or change after the dip. Resting areas and lodges are available if your visit extends for a longer period. Drinking water and meals are served round the clock for free.

A person visiting for the first time must take out enough time to visit the temple during different times of the day. It is an enriching experience to witness the morning ceremonies before sunrise or to see the temple shine in the full glory of the blazing afternoon sun or to see it all lit up and decorated like a beautiful bride once it is dark. Do not miss the opportunity to walk around the community kitchen to gawk at the scale of operations or even offer a helping hand, and make sure to enjoy a meal along with thousands of other visitors. Photography is allowed in and around the complex but not in the main temple. 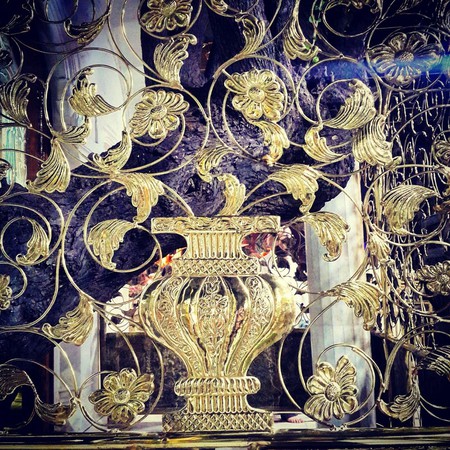 In order to avoid heavy crowds, visit the temple on a weekday. On weekends, public holidays and during Hindu festivals, the number of visitors almost doubles, making it a little chaotic. The queue to enter the main gurudwara can be excruciatingly long on such days. Even on a normal given day, visitors wait at least an hour or two. However, the sight and experience inside the main temple is absolutely worth the wait. Some peace and quiet are required to absorb the vibe and enjoy the trance of this holy house of God. There is a reason why the beautiful Golden Temple attracts more visitors than The Taj Mahal.

It is truly an experience to witness the grandeur of the temple, understand the faith, belief and principles of Sikhism and to enjoy the tranquility. Try and take time out to learn about the history and significance of the places and practices of the temple. Do not forget to climb the narrow steps and walk around the upper floor and the terrace of the temple.

The most important festivals celebrated are Guru Nanak Jayanti, Baisakhi, Diwali, etc. Birth and death anniversaries (Guruparbs) of the ten Gurus of Sikhism are also marked as days of celebration.

The management and the Sikh community is involved in various social and charitable causes; the pilgrims and visitors may also contribute if they wish. If not for religious or spiritual reasons, people visit the Golden Temple as it is also one of the most popular tourist destinations of India.