Golconda: a Testimony of the Chronicles of South India 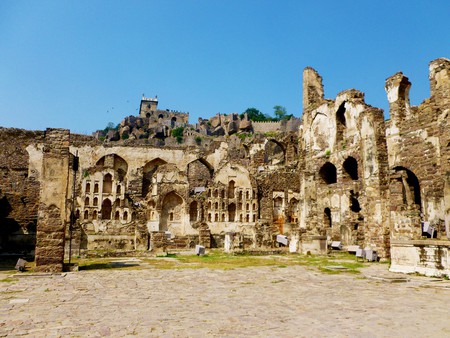 According to legend, a shepherd boy found a sacred Indian idol, and when the ruler of the Kakatiya dynasty heard about the discovery, he built a mud fort commemorating the occasion. It was called Golconda, Telugu for “shepherd’s hill”. In 1518, the Qutb Shahi kings took control of the fortification, expanding it and reinforcing it with granite, and it became the capital of their kingdom for several years.

Administered by the Archaeological Survey of India, the Golconda Fort stands on a 400ft-high (122m) hill in western Hyderabad. Away from the bustling city, it has three lines of fortification walls, one within the other. The kingdom, during the height of its power, raised the walls 12m (39ft) and added 87 bastions for security.

Golconda has eight gateways, with the Bala Hissar Gate as its main entrance. Above it are magnificent carvings of both male and female lions and peacocks, the two animals representing security and prosperity.

With four district forts, the complex includes both Hindu and Muslim architecture and comprises mosques, temples, tombs, stables, reservoirs, audience chambers, meeting halls and more. At one point, it also had a beautiful garden, where the queens would often spend time.

Inside, the fort has a unique acoustic effect. If you clap beneath the dome of Fateh Darwaza (one of the entrances), the sound of your handclap can be heard at the highest point of the pavilion – about a kilometre away. This acoustic engineering strengthened security by allowing signals to reach inhabitants in imminent danger very quickly.

The fort also had an innovative water-supply system, using Persian wheels to raise the water and store it in overhead tanks at three different levels. The water collected was then effectively distributed throughout the citadel, including the gardens and fountains, through stone aqueducts and a network of earthen pipes using the force of gravity.

The world’s first-ever diamonds were discovered and mined in southeast India, and they were brought to Hyderabad to be cut and polished. Yielding many diamonds, the mines in the area brought riches to the Qutb Shahis at Golconda, and by the 1880s, the name “Golconda” was synonymous with vast wealth. The legendary Koh-i-Noor diamond was once stored in the fort’s vault, which also held the Hope diamond, the Daria-i-Noor and the Regent diamond, to name a few.

The Mughal Empire had its eye on Golconda due to its wealth and strength. After invading most of the provinces in Hindustan, the diamond state became Aurangzeb’s sole target. The Mughal emperor led his army to seize the fort. However, the infrastructure was so impregnable with its fortified walls, spiked main gate – preventing elephants from ploughing through – and echo engineering that it took the emperor nine months to conquer it. Only after bribing a traitor within the Qutb Shahi dynasty to open one of the gateways did the Mughals enter the fort, eventually becoming the richest monarch in the world.

Most of Golconda’s damage occurred during the siege by Aurangzeb, and in 1724, the Nizams took over the fort from the Mughal Sultanate, until the province of Hyderabad became a part of India in 1948.

Today, the fort draws thousands of visitors to its gates every year to acknowledge the heritage and testimony of Hyderabad’s glorious past. You can relive the magnificence of Golconda’s history by watching the amazing light and sound shows that take place in the evenings.