Ghostly Bengali Legends: The Most Famous Bhoots in Local Folklore 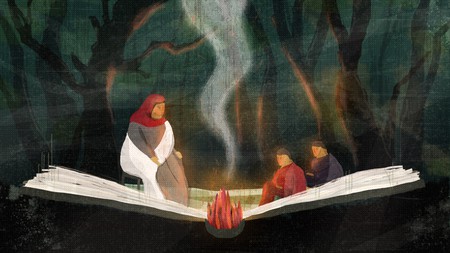 Ghosts, or bhoots, feature predominantly in Bengali literature, folklore and anecdotes passed between communities, taking shape through the societal structure and cultural experiences in Bengal. As opposed to ghosts in other countries, who prefer haunting domestic spaces, Bengali spirits often occupy the marshes, ponds and forests of the region, with some even able to take human form.

You can tell apart a Bengali ghost by lighting a turmeric root and holding it under their nose – they can’t stand the smell. They often have large appetites, especially for fish, which is a popular food in coastal Bengal. Many are mischievous, while others may be more vindictive. Here are a few of the ghostly tales that have gained popularity over time.

The brahmadaitya are the spirits of departed brahmins, who are part of the highest caste in Hinduism. All brahmin boys have to be admitted into brahminhood when they come of age, in a special ceremony known as the poite. According to legend, if a boy dies within 10 days of his poite ceremony, he becomes a brahmadaitya.

These ghosts make their home in the peepal tree, which is sacred in Hindu mythology due to its association with three deities: the roots represent Brahma; the trunk represents Vishnu; and the leaves represent Shiva. The brahmadaitya eat only food purified by religious prayers and rarely try to frighten humans. In fact, they sometimes even help fellow brahmins. But, according to Lal Behari Day, a 19th-century Bengali reverend and folklorist, they take offence easily. “Should their dignity be contemned, or their sanctum sanctorum be invaded or desecrated, their rage knows no bounds, and the neck of the offender is ruthlessly wrung and broken – a species of vengeance to which they are somewhat partial.”

Little is known about petnis, except that they are the ghosts of unmarried women who died with unfinished business. They are similar in appearance to women who are still alive, although their feet are pointed backwards, and they tend to make their homes in sandpaper fig trees.

According to folklore, these ghosts often try to accost men in order to satisfy their desires. They are known to be violent and dangerous when crossed. While they used to inspire terror, more recently, people have had a more sympathetic view of the petni, believing her to be an embodiment of female desire that disrupts patriarchal norms. For example, the famous Bengali writer Rabindranath Tagore used female ghosts in his stories to highlight the plight of women and give them the agency they lacked in life.

Sankhachurnis, or sankchinnis, are the ghosts of married women and widows. Their name comes from the clothes they wear, which are as white as conch shells, or sankha. The sankhachurnis are less violent than the petni, but are quick to take offence. They like to possess married women so they can relive their own married days once again.

In one popular folktale, a woman accidentally brushes against a sankhachurni. This makes her angry, so the ghost imprisons the woman in the tree. She then takes on the woman’s form and enters her house, where the husband and mother-in-law are impressed with her increased efficiency. However, differences quickly become apparent – the sankhachurni extends her arms several metres to reach for food, and instead of using fuel to cook, she thrusts her foot in the fire. Eventually, the burned turmeric test reveals her true form, and she is forced to confess and release the woman she imprisoned.

The appetites of Bengali ghosts seem to increase after death. The mecho bhoots are male ghosts, mostly fishermen or those who died by drowning, and are renowned for their love of fish. They are known to haunt lakes and ponds to feed their hunger.

Unlike some other Bengali ghosts, mecho bhoots are not malevolent. However, they will beg fishermen or lone travellers for the fish they’re carrying, saying in a nasal tone “Machh diye ja” (give me the fish). They will steal fish from boats and even head into local villages to search kitchens for their favourite food.

The skondhokatas are headless ghosts whose origin stories have changed over time. In the 19th century, Lal Behari Day described them as being vengeful and dangerous, willing to attack or enslave humans to help them find their lost heads. He suggested that “they generally dwell in low moist lands, outside a village, in bogs and fens, and go about in the dark, rolling on the ground, with their huge arms stretched out”.

However, more contemporary descriptions of skondhokatas describe them as the ghosts of people beheaded on the train tracks. They haunt railway stations, but can easily be outwitted because of their lack of sight.

All around the world, there are different legends to explain the strange, wavering balls of light that can sometimes be seen over marshes – today we know that these are the result of swamp gases. In Bengali folklore, these illuminated orbs are known as aleya, the souls of dead fishermen.

In some stories, the aleya lead other fishermen to their death. But they are sometimes benevolent spirits who show travellers the right path. The story of the aleya originates from the Sundarbans, a vast area of tidal islands, marshes and mangrove swamps in West Bengal. Unsurprisingly, it’s considered to be one of the most haunted areas in the state.

The nishi dak are ghosts of people who weren’t given a proper burial, and appear as shadows in the distance. The word nishi means ‘night’ and dak means ‘call’ – the nishi dak will choose a victim and call out to them in the voice of their loved one. They will use these calls to lure their victim into a secluded area before revealing themselves and killing their victim.

However, it’s possible to distinguish between the call of the nishi dak and the voice of a loved one. The nishi dak can only call out twice, so if you hear your name announced three times, you know you aren’t being haunted by a ghost.