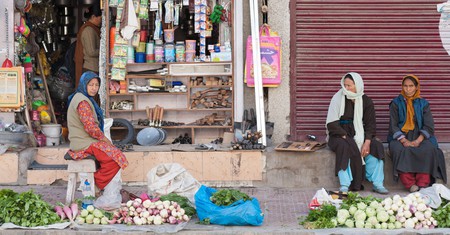 Much of this remote, arid region of North India is inaccessible five months of the year due to heavy snows. Yet, it has a rich food culture worth exploring, where the few ingredients available are used to create flavourful delicacies.

Stuffed flatbreads cooked on a charcoal stove. Tangy fresh apricot juice. Succulent handmade dumplings served with tomato chutney. These are just a few of the delicacies on offer in Ladakh, a region more known for its trekking routes and high-altitude motorcycle passes than its cuisine. But the region’s food culture, passed down over centuries, tells a heartwarming story of hardship and resourcefulness. For a remote area, Ladakh’s cuisine has some surprising multicultural influences, too. 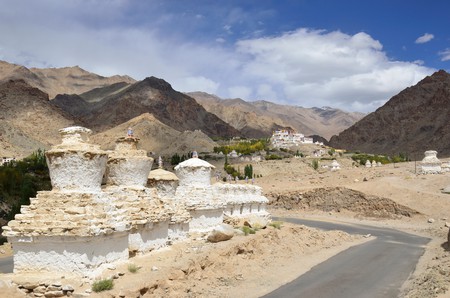 Once an important stopping point on the Silk Road, Ladakh attracted traders from Tibet, China and the Middle East, who brought their food customs to the region. Tibet had an especially profound influence on Ladakhi food culture.

Two of Ladakh’s most well-known Tibetan-inspired dishes are thukpa, a noodle soup, and momos (known locally as mok moks). Several restaurants in Leh offer upmarket versions of these dishes, serving momos stuffed with everything from minced chicken to yak cheese, and thukpa crammed with fresh vegetables.

The versions served in Ladakhi homes are a little more rustic. Thukpa, which translates to ‘overcooked’, is a soup thickened with flour and often flavoured with chhurphe, a dried cottage cheese.

Making mok moks becomes a social event in any Ladakhi home. Groups of women grate home-grown vegetables and cook them with butter, cheese, salt and pepper. A spoonful of filling is placed onto a round of dough, which is then sealed. Everyone has their own unique way of twisting and pinching the dough shut. 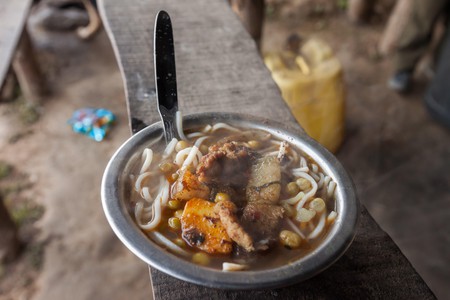 Over time, trade in Ladakh slowly dwindled and countries began to close and reinforce their borders. This remote, windswept region suffered centuries of isolation. Cut off from the outside world, Ladakhis were forced to use only locally-sourced ingredients.

As a high-altitude desert, the temperatures in Ladakh sometimes drop to -30°C, so only the hardiest crops grow here. The glacial rivers running through the region are used to irrigate small terraced fields of alfalfa and barley. Groves of apple, apricot and walnut trees can also be found in these fertile river areas. In the warmer months, vegetables like potatoes, beans, radishes, spinach and carrots are grown. These fruits, vegetables and grains are used in the staple dishes of the region. 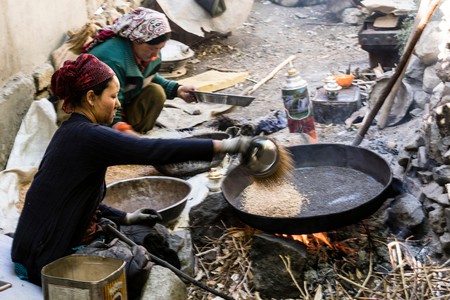 Barley is ground at local mills (rantaks) and used to make a variety of stove-cooked flatbreads. They are eaten alongside dishes like baril, a dip made of ground apricot kernels and walnuts. Barley flour is also used to make noodles for the hearty soups that characterise the region’s cuisine. One of the most popular is skyu, a stew served with vegetables, cap-shaped noodles and occasionally, scraps of meat. Kholak is also eaten widely throughout the region. It’s a simple dish consisting of ground barley powder, which is added to liquids such as tea or chhang, a fermented barley drink.

The Ladakhis keep hardy livestock, such as goats, yaks and cow-yak hybrids known as dzos. These animals provide dairy products that enrich many local dishes. This includes tangthur, a dish of green vegetables in buttermilk and the region’s most popular drink, butter tea. As the name suggests, the tea is made with butter and salt. It’s a rich, high-calorie drink suitable for long winters. 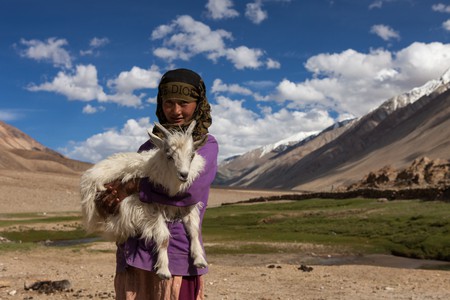 A girl with a pashmina goat in the Chang Thang region of Ladakh, India | © Marji Lang / Alamy Stock Photo

According to Deachan Angmo, a Ladakhi woman studying rural development, the region’s inhabitants substitute their diets by foraging. “This is wild garlic, which we use to flavour our dishes. These are stinging nettles. We use them to make soup”, she says, pointing to the small plants growing on Ladakh’s bare, rocky slopes.

Later, walking along the Markha River, she points out trees with distinctive orange berries. “That’s a sea buckthorn plant. We use the berries to make juice as well as syrup for the winter as it has a lot of vitamin C.” The berries are tart and as addictive as sour candies. The juice itself is a lot sweeter, as it’s artificially sweetened with sugar.

With such a short growing season, Ladakhis have traditionally needed to become resourceful when it comes to storing food for the winter. Leafy greens are dried and powdered, while root vegetables are stored underground. Certain types of apricots are made into jams, while others are dried and later soaked in water to make a drink. Caper bushes also grow wild in Ladakh and the shoots are picked and made into a relish. 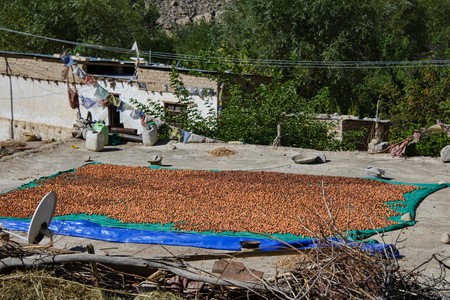 In the mid-1970s, Ladakh opened to tourists and every year sees an increase in visitors from across the world. This has altered the Ladakhi food culture. The region’s capital of Leh has restaurants offering food from around the world. More groceries are available to purchase. In previous years, many Ladakhi people ate meat out of necessity, but now the increased choice of ingredients has enabled them to convert to vegetarianism, in line with their Buddhist faith.

But according to Thinlas Chorol, social entrepreneur and founder of the Ladakhi Women’s Travel Company, tourism also has negative effects. “Now we’ve moved to a cash economy and people buy foods that are easy to cook, like Maggi noodles”, says Chorol. “The trouble is, these foods don’t have much nutritional value. The Ladakhi people used to be sustainable before tourism, but now they’re forgetting how.”

Before tourism, most of the population of Ladakh were smallholders or farmers, growing their own crops. But now, residents are giving up farming in favour of jobs that generate greater income. Those who do farm have dropped traditional methods in favour of harmful pesticides and fertilisers. 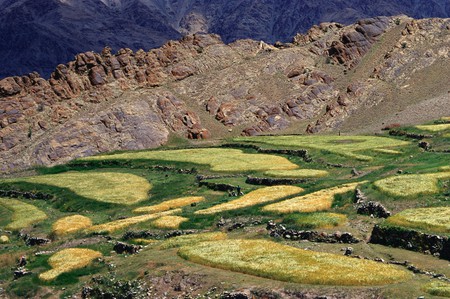 Many local NGOs and health organisations – such as SECMOL (the Students’ Educational and Cultural Movement of Ladakh) and LEHO (Ladakh Environment and Health Organization) – believe it is important to return to a more ecologically-friendly way of life. Their goal is to make Ladakh an organic region by educating Ladakhi people in sustainable methods and providing incentives for organic farming.

However, they still want the region to embrace modern developments. At the SECMOL campus, students learn about traditional Ladakhi food culture alongside sustainability, science and governance, as they grow, preserve and forage indigenous foods. Recently, an NGO named Juley Ladakh organised a cultural exchange programme, where Japanese chefs taught Ladakhi residents how to make Japanese soba noodle dishes from local buckwheat. And at the same time, restaurants like Alchi Kitchen, Namza Cafe and Syah are working on elevating and showcasing Ladakhi cuisine to help generate pride in local dishes.

Collectively, these businesses and organisations aim to champion traditional ingredients, improve education and use staple foods to access a more cosmopolitan food culture. Hopefully, this is the direction that Ladakh will continue to move in – rooted in culinary tradition while employing innovative farming methods and cooking techniques.