Finding A Place In History: The Bangalore Fort 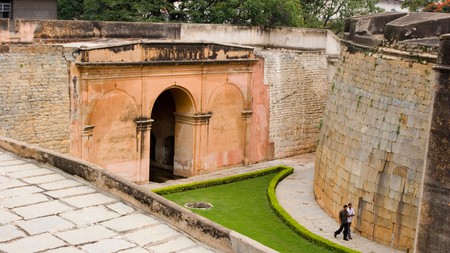 Home to several IT companies, tech parks and the headquarters of ISRO (Indian Space Research Organisation) and Hindustan Aeronautics Limited (HAL), Bangalore can rightly be called the ‘city of modern India’. When you go sightseeing in Bangalore, must-visits include Brigade Road, the office of Infosys (considered one of the most spectacular office buildings in India) and the HAL Aerospace Museum. However, such an itinerary would give the impression that Bangalore became what it is today after the IT revolution, as though the city doesn’t have a history. But an archaeological gem hidden in one of the city’s oldest markets sheds some light on Bangalore’s inception.

Located amid the bustling KR Market, the majestic Bangalore Fort is often overlooked by visitors. As one of the largest flower markets in Asia, the KR market itself is of great interest to tourists, but the fort is where the city’s foundation was laid. The fort was built as a mud structure by Kempegowda I, a feudatory of the Vijayanagara Empire, in 1537 CE – the same year Bangalore was founded. In 1687, the Mughals took possession of the city and leased it to Chikkadevaraya Wodeyar, the King of Mysore in 1689 CE. The Wodeyar ruler expanded the existing fort to the south of the city and built the Sri Venkatramana temple in its vicinity. But it was Hyder Ali who strengthened the fort by renovating it with stones in 1761 CE.

The possession of the Kingdom of Mysore later passed to Hyder Ali’s son Tipu Sultan, and so did the fort. Now Tipu’s stronghold, the fort witnessed the Third Anglo-Mysore War (1789-1792), fought between the Kingdom of Mysore and the British East India Company led by Lord Cornwallis. The fort was captured by Lord Cornwallis in 1791 CE. A tablet marking the siege is embedded in the wall from where the British took control of the fort. The tablet, just like the fort, is enshrouded in the vibrant market. The fort was handed over to Tipu a year later as per the Treaty of Seringapatam.

Today, this structure, made of sloping granite walls with stucco carvings, is well maintained by the Archaeological Survey of India. The fort premises also house a small Ganesha temple with a gabled roof, intrinsic to the architecture of South India.

Despite the grandeur of its history, the structure is largely neglected both by the local people and tourists. But efforts are being made to give the fort the recognition it deserves. In 2015, Bangaloreans organised an event called ‘Paint the Kote Red‘ in which people dressed in red, holding torches and red lights while tracing the boundaries of the fort through a human chain, thereby painting the fort red. Perhaps, someday, efforts like this will manage to arouse people’s curiosity about the culture and heritage of this hi-tech city.