Exploring the Incredible History of Cultural Exchange in Ladakh

People have been coming to Ladakh for over a thousand years with a sense of purpose and their conquests have taken them to untold plateaus, unnamed mountain peaks, and unexplored trade routes. This beautiful region’s position as an important territory on the Silk Road has led to a great cultural exchange in Ladakh that can be seen there today.

Mankind’ search for glory has been marked by economic pursuits and military conquests resulting in strategic conflict and collusion. The rich history of cultural exchange in Ladakh is a product of such collusion.

The arid landscape, the Gompas, the Stupas, and the frozen winter lakes in Ladakh reverberate an ages-old story about the numerous invasions, conquests, and journeys along the Silk Road. The Silk Road was probably the most strategically important and one of the longest trade routes in ancient times that enabled people from Japan, China, India, Central Asia, Persia, Syria, and the Eurasian Steppe to exchange commodities and, more importantly, cultural customs. 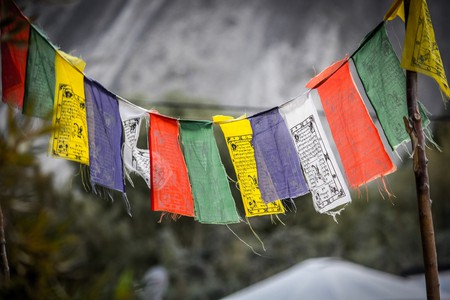 A struggle for dominance with the rulers of Ladakh

The Silk Road passed through Ladakh, making the region a target for rulers. These chiefs set their sights on Ladakh to further their political ambitions and the people of Ladakh had to pay a heavy price for the numerous battles they fought. 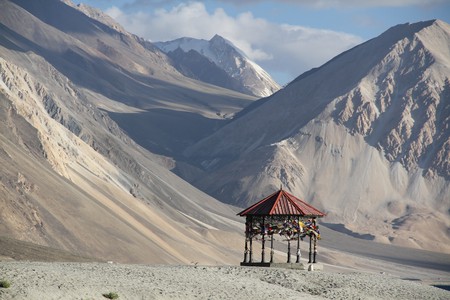 Among the earliest visitors to Ladakh were the Dards, an Indo-Aryan group of people mentioned in the annals of Nearchus, the admiral of Alexander the Great, and the Greek traveler Megasthenes. The Chinese historian Hsuan Tsang, in his travel memoirs, noted the existence of a Moluosuo empire, which was then also known by the names of Maryul, Marsa, and Sanbohe. He further archived that the empire of Maryul, which covered the geographical area of present-day Ladakh, was bordered by a kingdom called Suvarnabhoomi, also known as Swarnarajya and Suvarnagotra, and all of which were Sanskrit names meaning the “Land of Gold”. Tsang recorded further that the inhabitants of Suvarnabhoomi were gold washers and it is possible that the kingdom may have been a major hub of gold production and washing. 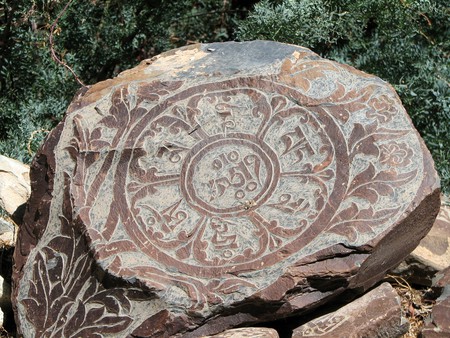 Maryul is the ancient name of an area that is today part of Ladakh and in which a Tibetan commissioner was positioned for the first time in 653 A.D. Soon after his appointment, the local populace rebelled, albeit unsuccessfully. By the early 8th century, Ladakh was ruled by Tibetans even though the population was largely non-Tibetan in origin. By 747 A.D., Tibetan control over the region was set to be challenged by the Chinese general Gao Xianzhi, though his Chinese influence did not last long and was weakened by Arab invasions. The geographical treatise titled Hudud-al-‘Alam (982 A.D.) speaks of the failing Tibetan influence in the region, its disintegration by the year 842 A.D., and consequently, the formation of the Ladakh dynasty.

The rise of Tibetan influence and culture in Ladakh

Between the 8th and 13th centuries A.D., Ladakh was ruled under a Tibetan regime. Nyima-Gon, from the royal Tibetan house, became Ladakh’s first Tibetan king and created a foundation for the first Tibetan cultural exchange in Ladakh. 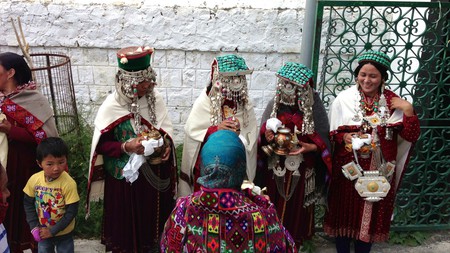 The Culture and Way of Life in Ladakh | © alan jones / Flickr

This period marked the Second Spreading of Buddhism (the First being in Tibet), courtesy of the ruler Lde-Dpal-Hkhor-Btsan, who had sworn to spread the Bön religion (a similar but distinct set of beliefs, different from Tibetan Buddhism) of the indigenous Tibetan people during the pre-Buddhism era. The Ladakh and Leh empires then split for a period of time before being consolidated by the Basgo king Bhagan, who not only claimed the title Namgyal (meaning victorious), but also founded the Namgyal dynasty, which is still in existence today. The Leh Palace and Hemis Buddhist Monastery, two of the best examples of Tibetan influence on Ladakh, were built by the Namgyal ruler Sengge Namgyal. The rule of the Namgyal dynasty continued until the 19th century when the Dogras, a group led by general Zorawar Singh, invaded Ladakh, momentarily disrupting the status quo of the Leh and Ladakh regions.

How Tibetan Buddhism has changed Ladakh

The history of Buddhism in Ladakh and its impact on Ladakh’s traditional life may be traced back to two major events: Buddhism took shape in India and reached Ladakh under the rule of the Maurya dynasty emperor Ashoka during the 3rd century B.C.E. when the first Buddhist monastery was built in the Suru Valley; then, the Buddhist monks Padmasambhava and Bhikhu Shantarakshita, during the 8th century A.D., established Buddhism firmly in both the Tibet and Ladakh regions.

The Silk Road trades, the conquest for dominance of Central Asia by rulers, and the exchanges among inhabitants of the regions augmented these efforts. The myriad Leh Ladakh handicrafts, paintings and architecture styles reveal that the Tibetan Buddhist influence in the region, and the cultural exchange in Ladakh, has now exceeded thousands of years. 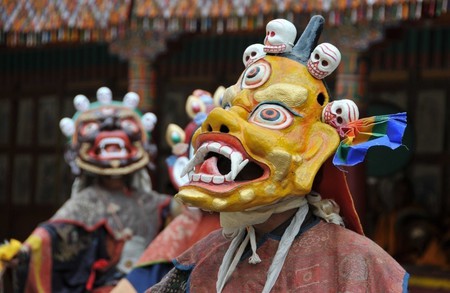 The tradition of Buddhism in Ladakh is celebrated during a festival at the Hemis Monastery held on the tenth day of the Tibetan calendar’s Lunar month, which proves that much of the region’s history has probably been recorded in accordance with the Tibetan Lunar calendar. Even the traditional food of Ladakh has the strong flavors of Tibetan cuisine: foods like thukpa (a Tibetan noodle soup), Tibetan butter tea, and momo (dumpling) varieties like sha, shoogoi, and gonga are evidence of the cultural exchange that has existed in Ladakh for thousands of years.