Explore the Last Surviving Temples of This Incredible Empire

Karnataka is a culturally diverse and vibrant southern Indian state with a recorded history that dates back more than two millennia. The rich culture, history and development of this region can be mainly attributed to the patronage it received during the past reigns of great empires and dynasties. Architectural exuberance reached its zenith during the rule of the mighty Hoysalas, who built over 1,000 temples across different parts of Karnataka. These are some of the most stunning Hoysala temples still standing today.

The Chennakeshava temple was built by the great Hoysala king Vishnuvardhana during the year 1117 CE. The temple is located on the banks of the Yagachi River in Belur, which was the early capital of the Hoysalas. The temple is dedicated to Lord Chennakeshava – a form of the Hindu god Vishnu. This is the largest of the surviving temples, and the complex has been proposed for UNESCO World Heritage status. 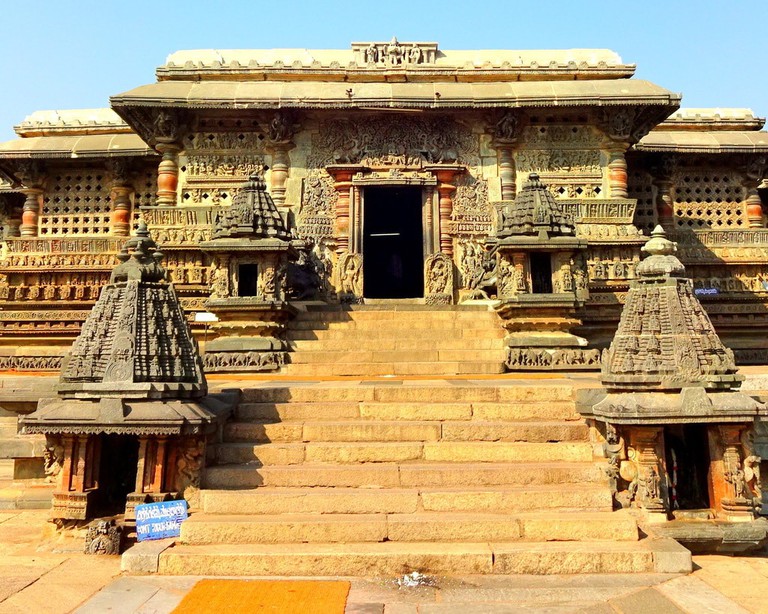 The Hoysaleswara temple was commissioned by King Vishnuvardhana almost during the same period as the Belur temple and is located in Halebidu, 20 km from Belur. The temple is dedicated to the Hindu god Shiva, and is also proposed to be listed as a UNESCO World Heritage site. It is a highly ornate temple, with amazingly detailed carvings displayed all around the outer walls, and is regarded as a masterpiece of southern Indian temple architecture. 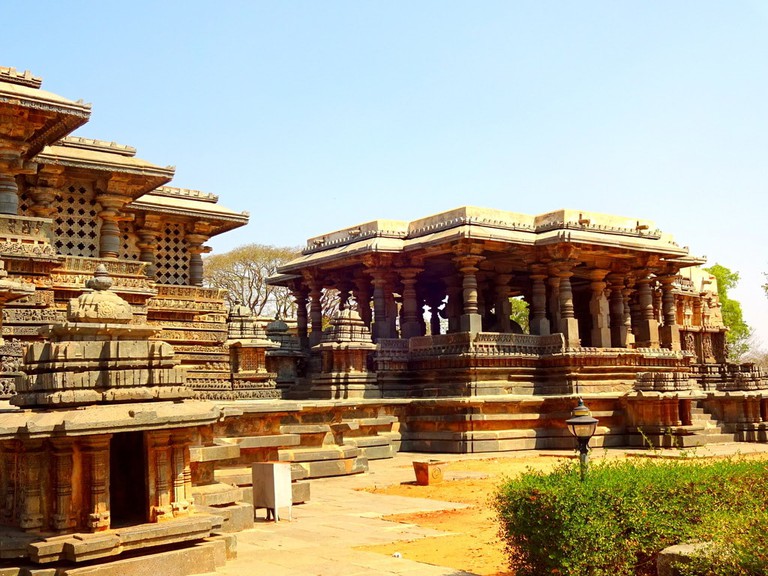 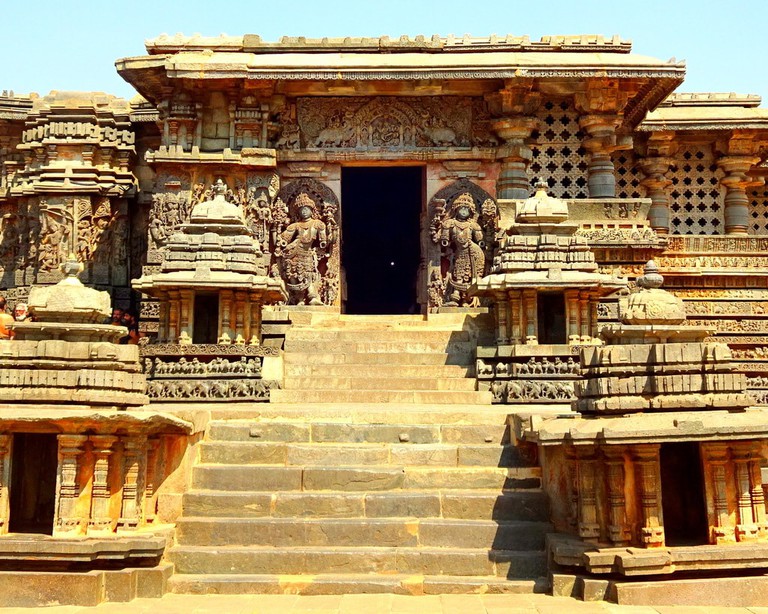 This stunning stepped pool – also known as Hulikere Kalyani in the local Kannada language – is located at Hulikere, a small suburb 3 km from Halebidu. It was built in approximately 1160 CE, during the reign of Hoysala king Narasimha I. The highly ornate miniature shrines are believed to represent the nine planets and stellar constellations with reference to ancient Hindu astrology. 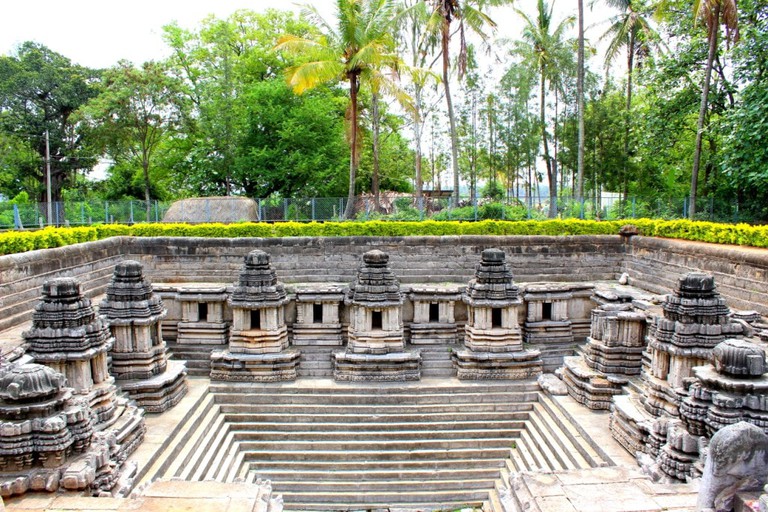 The Chennakeshava temple was commissioned during the reign of Hoysala king Narasimha III in 1258 CE, and is located on the banks of river Kaveri at Somanathapura, about 40 km from the historic city of Mysore. It is a highly ornate temple and a perfect example of the Hoysala style of architecture. 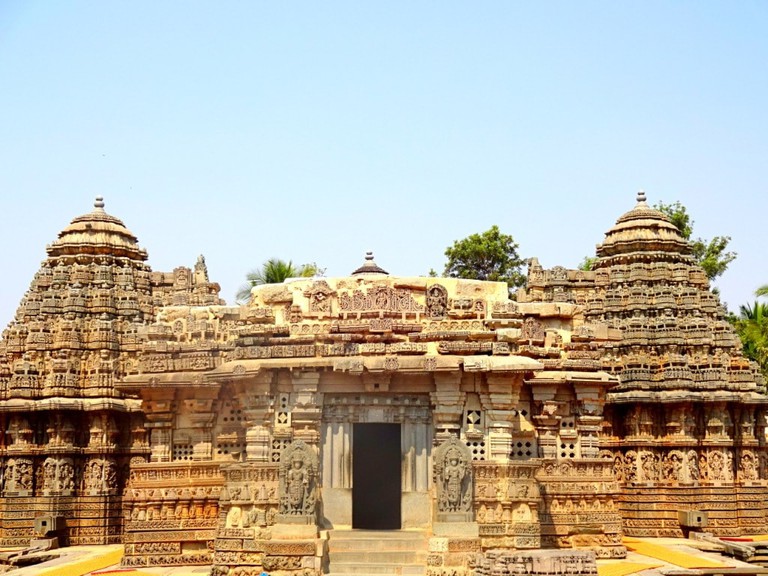 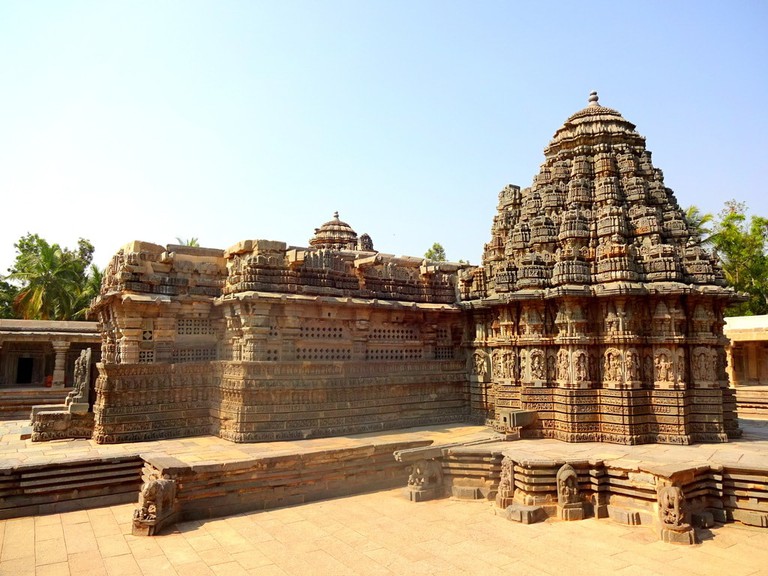 The Veera Narayana temple is a short distance from Belur and Halebidu and is located at Belavadi, a small village in the Chikkamagaluru district of Karnataka. The temple was commissioned in the year 1200 CE by Hoysala king Veera Ballala II and is renowned for its shining lathe-turned pillars in the main sanctum. 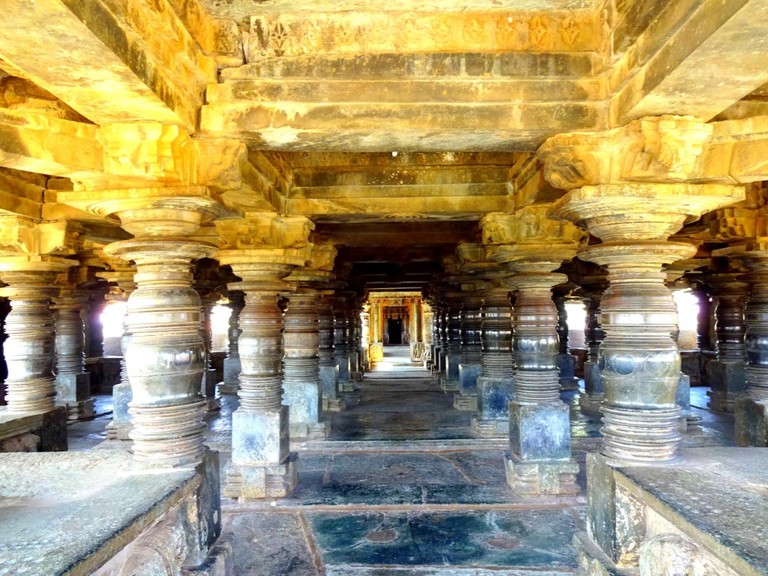 The Lakshmi Narasimha temple is located at Nuggehalli on the Tiptur–Channarayapatna highway, approximately 50 km from Hassan. It was built during the period of Hoysala king Vira Someshwara in the year 1246 CE, intended to be highly decorative and dedicated to the Hindu god Vishnu. 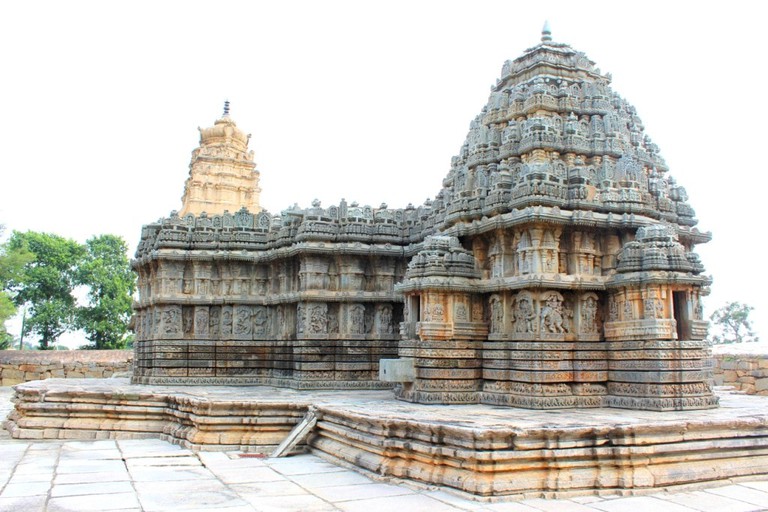 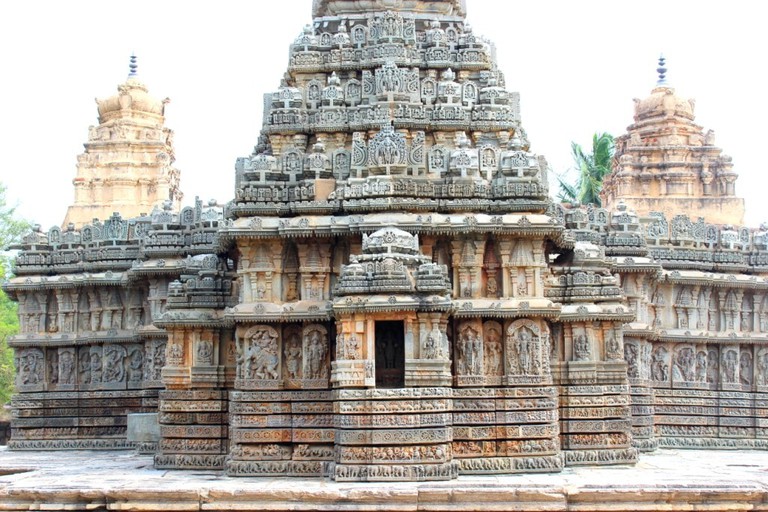 The Lakshmi Devi temple is located at Doddagaddavalli – approximately 16 km from Hassan – and was commissioned by King Vishnuvardhana and built in the year 1114 CE, making it one of the earliest known temples built by the Hoysalas. The main deity of the temple is the goddess Lakshmi, and this is the only example of the four-shrined temple style built during the Hoysala period. 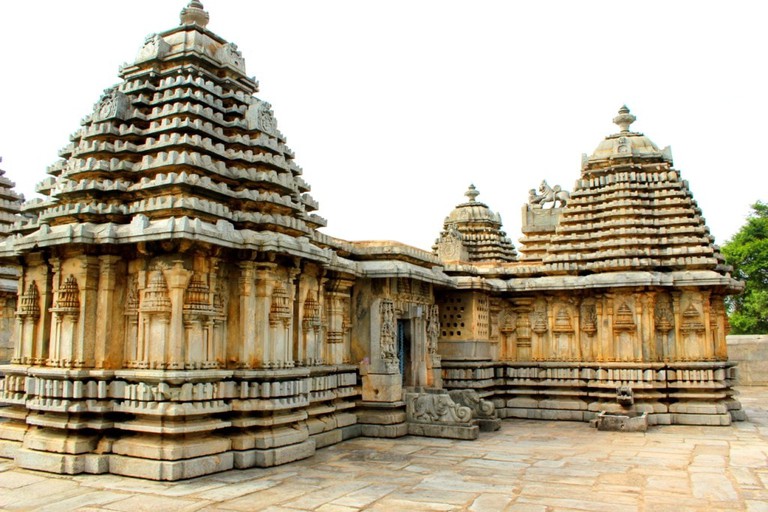 The Bucesvara temple is an elegant example of 12th-century Hoysala architecture. It is located in the village of Koravangala, 10 km from Hassan, Karnataka, and was built in 1173 CE commissioned by Hoysala King Veera Ballala II. It is a simple yet highly ornate temple, dedicated to Lord Shiva and the sun god Surya. 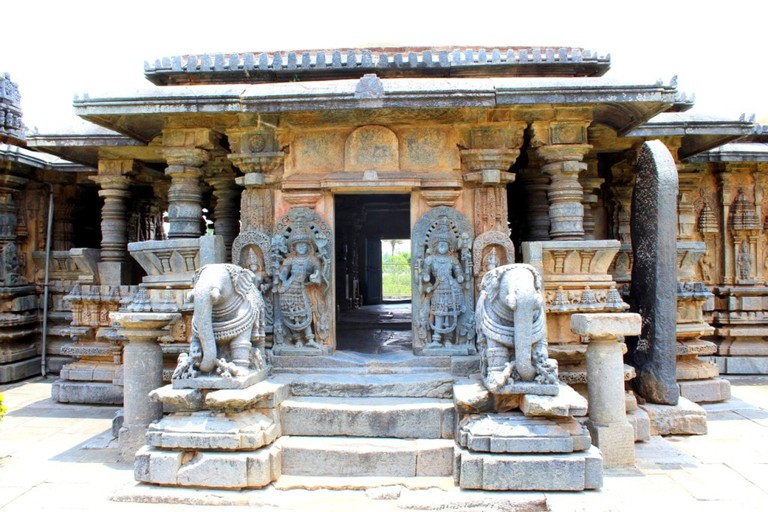 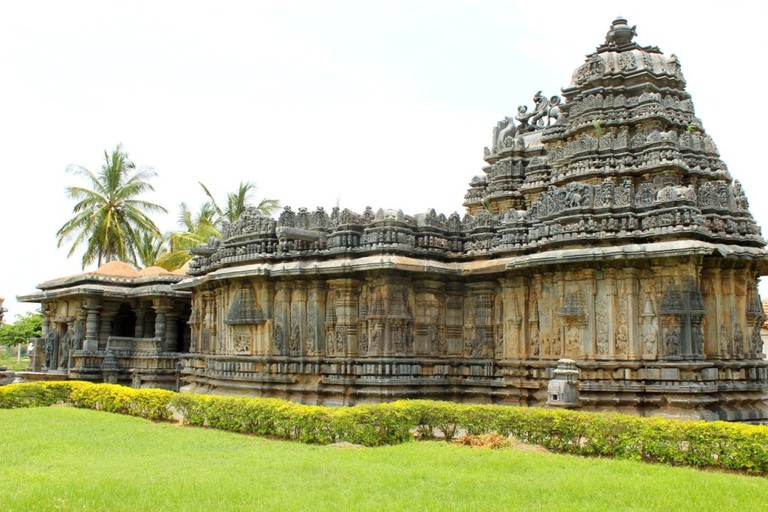 The Mallikarjuna temple, dedicated to the Hindu god Shiva, is in Basaralu, a small town in the Mandya district, Karnataka. Basaralu is approximately 65 km from the culturally important city of Mysore and was built under the patronage of Hoysala King Vira Narasimha II circa 1234 CE. The temple is a highly detailed example of Hoysala architecture and resembles that of Belur and Halebidu in quality. 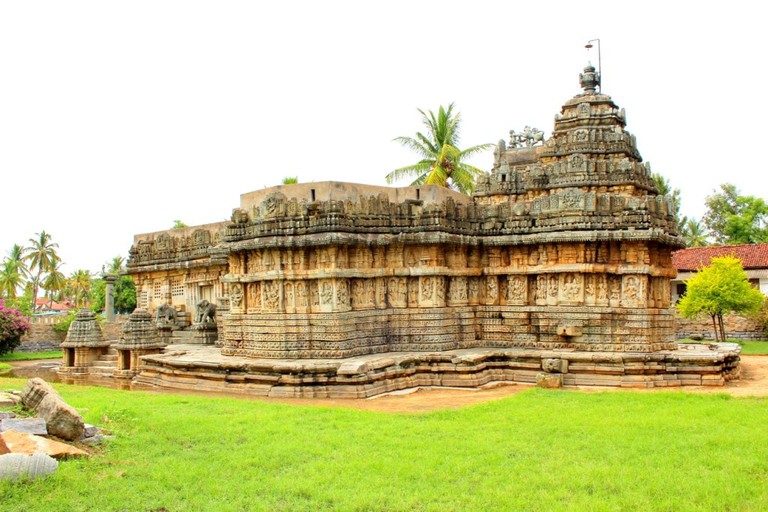 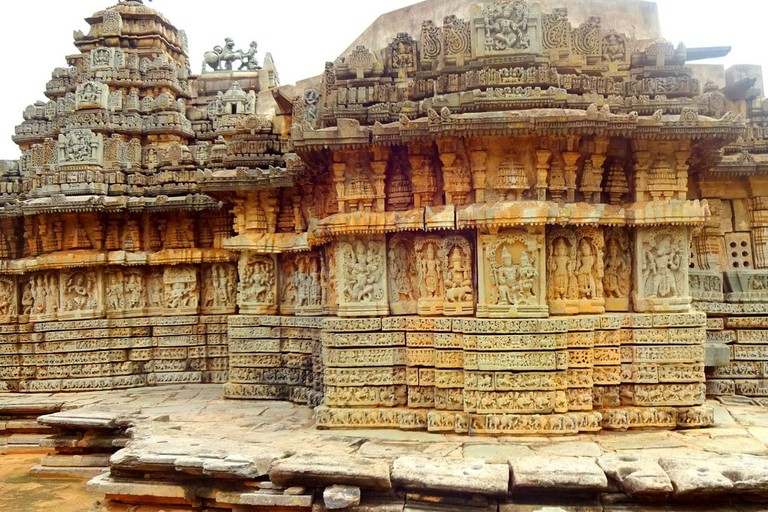 The Lakshmi Narasimha temple at Haranhalli is a good example of 13th-century Hoysala architecture. Haranhalli is located approximately 35 km from Hassan city in Karnataka state, and the temple was built in 1235 CE by the Hoysala king Vira Someshwara. 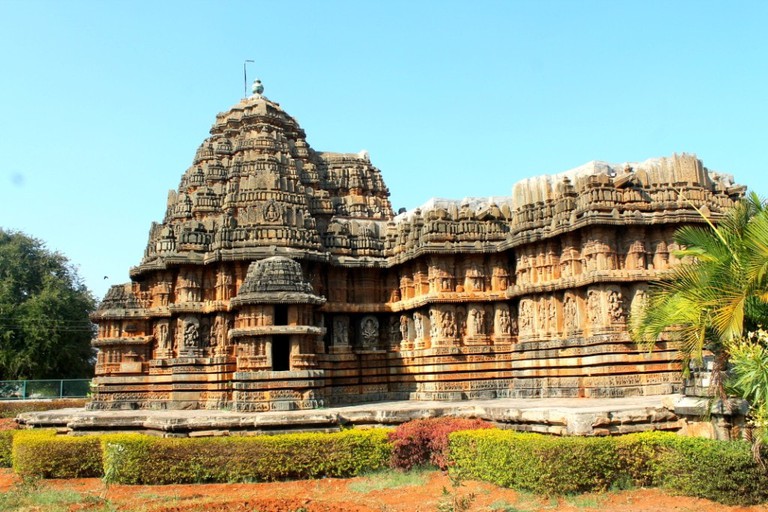 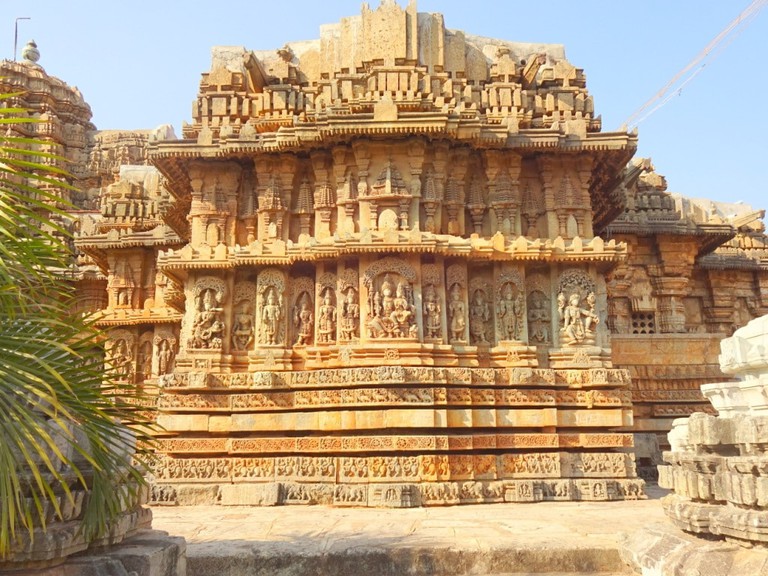 Ishvara temple at Arasikere is approximately 40 km from Hassan and dates from the Hoysala period, thought to have been built in approximately 1220 CE during the reign of Vira Ballala II. The temple is unique in terms of its 16-pointed stellar sanctum, the like of which is found nowhere else. 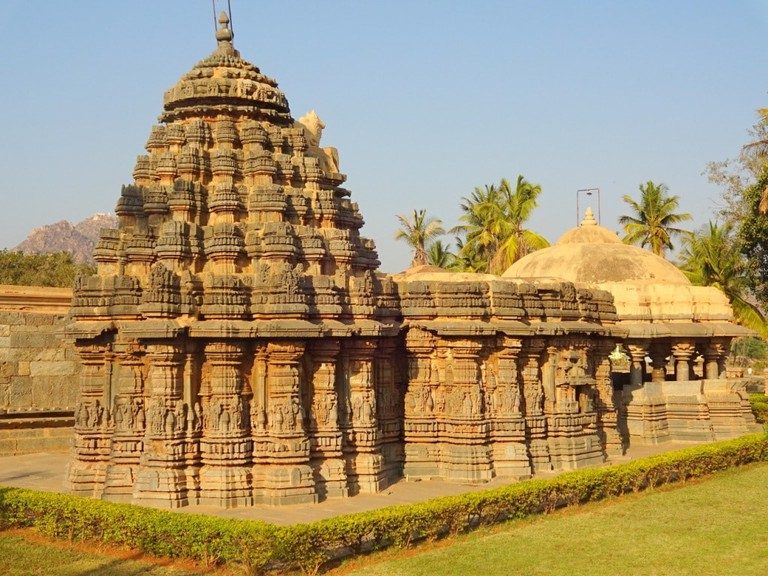