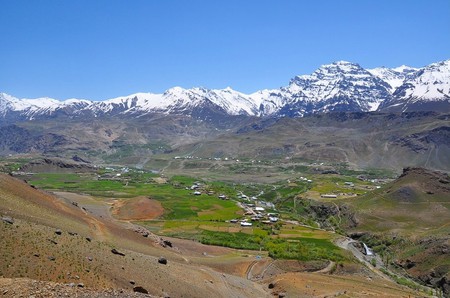 Set at an elevation of 10,761 feet (3,280m) above sea level in the Kargil district of the northern Indian state of Jammu and Kashmir, and with an average temperature as low as −23°C (-9°F), Dras is the coldest place in India and the second coldest inhabited place in the world. Snowy, rugged landscapes, scenic valleys, gorgeous ridges, absence of modern noise pollution, and the harsh cold characterize this frosty township, thus offering an experience that does not have an equal anywhere in India. So, if you have a thirst for spine-tingling and bone-chilling adventure, add Dras to your travel bucket list.

Also referred as ‘The Gateway to Ladakh,’ the coldest ever temperature recorded in this mountain township was -60°C (-76°F) in January 1995. Despite being a remote and numbingly chilly destination, it attracts plenty of travelers every year, owing to its picturesque sights bound by an air of serenity and adventure. 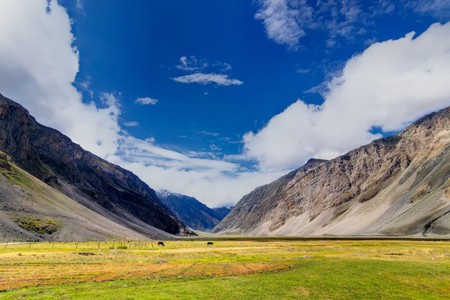 People and culture of Dras

For hundreds of years, Dardic and Balti communities have settled on this frosty land, and have survived the extreme cold conditions. The population of this tiny town is a mere 1,201 hardy people, with the majority being Muslim, though there are a few Buddhist homes, too. The inhabitants are often referred to as the ‘Guardians’ of the region. Bright-colored shops and houses made of brick and wood, dot each side of the road, with the backdrop of snow-capped, rugged peaks. 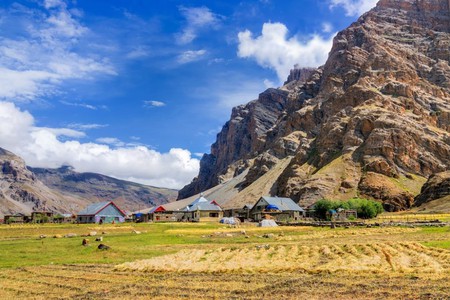 The foot of the Zoji La Pass, set at an altitude of 10,764 feet (3,280m) above sea level, serves as the starting point of the Dras valley. The Zoji La Pass is one of the highest and most dangerous passes in the country, and is blanketed by snow-laden peaks and dense jungles. It is enveloped in snow during the fall through to the spring season, and remains closed during wintertime (mid-October to early May) as it freezes completely.

The harsh cold spell in Dras doesn’t deter its inhabitants in any way. In fact, they traverse the dangerous Zoji La Pass even in the extreme conditions and carry out their work of trading and transporting merchandise via the pass, as well as helping tourist to navigate the region. The locals are friendly and warm and love to share stories and folklore with tourists. 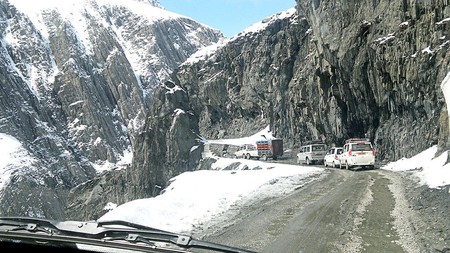 The place is small and can be best explored on foot. Also, as it serves as a base for numerous hefty elevation Himalayan treks, it has a lot to offer adventure enthusiasts—hikers and trekkers are in for a treat here. Besides, it also offers plenty of opportunities to appreciate the spectacular scenery and jaw-dropping vistas surrounding the region.

This river flows through the Dras, set against the snow-laden summits and amid the colorful wildflowers in full bloom and lush greenery of the valley. During late summer, a ‘meltwater’ river is formed because of melting of glaciers. There are several campsites near the river where you can pitch a tent and soak in the natural beauty and gorgeous views of the snow-capped mountains, fall asleep under the stars and wake up to the soothing sounds of the river. 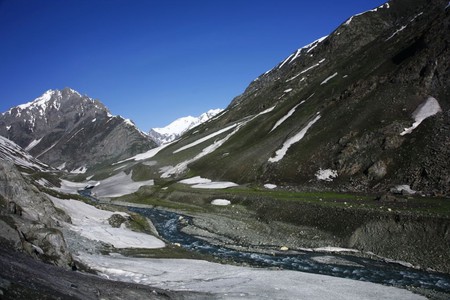 Set at an elevation of 17,411 feet (5,307m), Tiger Hill is a hit with tourists owing to its hefty altitude and also being the scene of the infamous Kargil War of 1999. Just take a moment to marvel at the grandeur and beauty of the hill, and during sundown it truly is a sight to behold when the rays fall over the mountains forming a beautiful spectrum of colors.

On the periphery of Dras lies Bhimbet—which is basically a stone that is considered a depiction of Pandava Bhima from the epic ‘Mahabharata.’ According to the folklore, this rock piece moved itself from the mountains to its current spot, and the soil around it has healing properties. Visitors from all around come to see this huge rock that actually flew once.

Nestled at the base of Tololing Hill, Kargil War Memorial, also called ‘Vijaypath,’ is a must-visit site. It was built to honor the memory of the war heroes of the 1999 Kargil War. It’s made in red sandstone and you’ll see the tricolor flag of India waving high in the sky against the backdrop of the snow-laden mountains that witnessed the infamous war. Each stone is inscribed with epitaphs that read: ‘Beneath this earth, young warriors sleep.’ This site occupies a special place in the history of the country, and is a moving symbol that helps us remember the sacrifices made by the country’s soldiers. 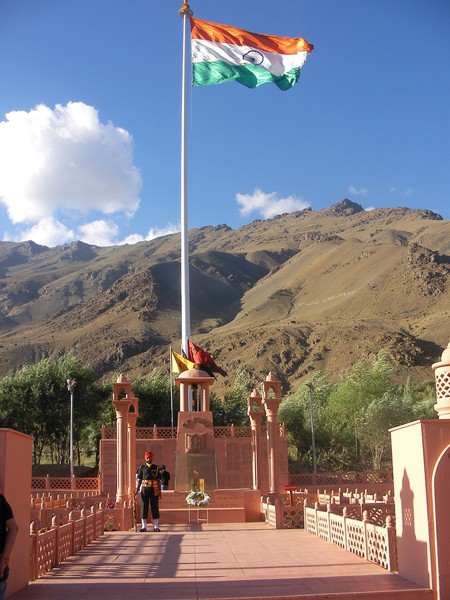 Situated four miles (7km) from Dras, the Ningoor Masjid is a holy site for Muslim pilgrims. According to folklore, one of the walls of the masjid was formed naturally. It is a great piece of architecture, with hues of Persian blue and turquoise and a dab of green. This mosque has stood tall in the harsh cold weather of Dras.

Other points of interest worth checking out in Dras include: Mushkoh Valley that is resplendent with multi-hued wildflowers; Manman Top that offers breathtaking views of the Himalayan peaks; Line of Control, and the Dras Valley. The Draupadi Kund—a holy pond for Hindus—is the final place where queen Draupadi from the epic poem ‘Mahabharata’ bathed for the last time before she died.

Dras is also known for its polo matches that have been hosted here for years. Local and international players come together to play a friendly game in order to boost the tourism in Jammu and Kashmir.

There are several treks available in and around Dras. For instance, trek to the Amarnath holy cave, or Suru Valley—these treks take around three days and are scenic, dotted with dazzling river streams, villages, and vibrant and colorful wildflowers sprinkled all over the landscape.

If you prefer a shorter and relatively easy trek, Dongchik is the perfect spot, about six miles (10km) from Dras. This trek brims with picturesque natural beauty. 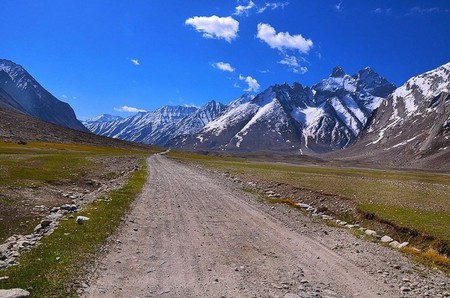 Where to stay and eat

For many, Dras is a pit stop while traveling from Srinagar to Leh. There are a few guest houses and budget hotels in the area where you can have a brief stay and explore the area, with Jammu and Kashmir Tourism Department (JKTD) owned and run guesthouses also on offer. Also, there are many accommodation options available in Kargil, which is just an hour’s drive from Dras.

There are small restaurants and dhabas scattered in and around Dras, where you can grab a bite to eat at a reasonable price.

The best time to visit ‘The Gateway to Ladakh’ is June to early September, when the average temperature is around 15°C (59°F), with little to no rainfall. 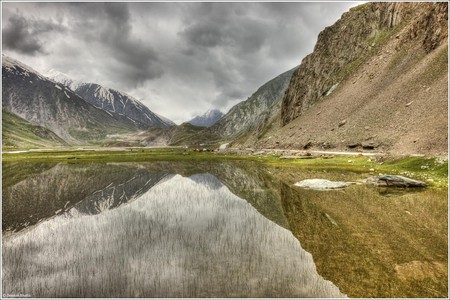 Dras can be reached via road, train or air. Srinagar International Airport is the closest airport to Dras, 94 miles (152km) via NH1, though visitors can hire a cab the rest of the way.

If you opt to travel via train, the nearest train station is Srinagar Railway Station, approximately 96 miles (155km) and from there on, hop in a car or bus for Dras—a three-and-a half hour journey.

If you opt to travel via road, reach Srinagar and take National Highway 1 that runs through Leh, followed by Kargil and Dras—it is one of the most scenic and stunningly beautiful drives, with multi-hued summits and verdant slopes. You can take a private taxi, shared cabs, or state transport buses for Dras from Srinagar, and it takes around three-and-a-half hours. Several buses operated by the Jammu and Kashmir government run between Srinagar and Kargil, with a 10-minute stop at Dras.