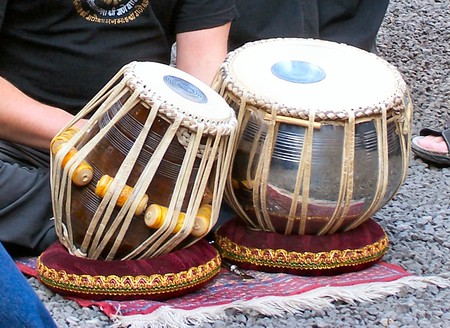 The Tabla, considered one of the finest percussion instruments in the world, has very well carved a space for itself among India’s most integral and popular traditional musical instruments. Consisting of a pair of small drums, the tabla is one of the key components in Hindustani classical music and other traditional styles of music in South Asia. Music fans heading to or are already in Kolkata have all the more reason to rejoice, for the city shares a prominent link with some of the country’s finest tabla-produced music.

The instrument is comprised of two single-headed small drums that are slightly different in size and shape—the smaller daya or dahina (right) tabla, and the larger baya or bahina (left) tabla. Played with a complex technique that involves the musician using fingers and palms in a range of configurations to produce various different sounds and rhythms, the tabla is a versatile component of various genres of music across the subcontinent.

Kolkata has remained one of the prime spots for manufacturing tablas in India over the years. Made from lighter wood than those of its counterparts made in Mumbai, Delhi, or Varanasi, Kolkata tablas are considered to be both easier to play and produce a better sound. Tablas from the City of Joy have thinner heads, and are made from lighter woods—contributing to their sweeter, fuller sounds.

However, tabla-makers from the Kolkata region attribute the superior quality of their product to more than just raw materials and manufacturing difference. Rather, the superior tablas are a reflection of the region’s dedication to perfecting their craftsmanship. Mukta Das, who runs the Rhythm Tabla Shop in Kolkata is one of the many tabla makers from Kolkata who have gained a deep following of tabla players around the country—having supplied tablas to legendary players such as Pandit Kishan Maharaj, Pandit Shankar Ghosh, Pandit Swapan Chaudhuri, Ustad Zakir Hussain, and Pandit Bickram Ghosh.

Much like their counterparts, Kolkata’s tabla makers give great importance to the process of handcrafting tablas customized to their customers’ needs and style. Narayan Badya Bandhar, yet another legendary tabla-making company currently run by founder Narayan Das’s grandson Shyamal Das, crafts their tablas as a family activity in a small studio. As is characteristic of Kolkata-made tablas, they pride the attention and affection devoted to crafting their pieces.