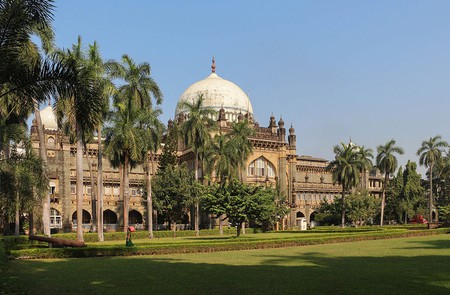 Amidst the hustle and bustle of South Mumbai in the Kala Ghoda precinct, obscured from public view by its huge walls and surrounded by manicured gardens, stands the imposing structure of Chhatrapati Shivaji Maharaj Vastu Sangrahalaya (abbreviated to CSMVS). Listed as a Grade I Heritage structure, it houses a world-class collection of over 50,000 artifacts, making it one of India‘s finest art and history museum. 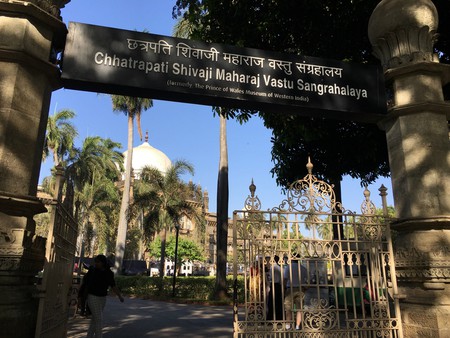 ‘…That’s why we have the Museum, Matty, to remind us of how we came, and why: to start fresh, and begin a new place from what we had learned and carried from the old.’ ― Lois Lowry, Messenger

On November 1905, the then-Prince of Wales laid the foundation stone of the museum, and hence, it was named Prince of Wales Museum of Western India. The museum was unique in that it was built by enormous contributions from prominent people of Bombay, aided by the then-Government of Bombay Presidency. The building was completed in 1914 but was used by the military as a hospital, not opening to the public until 1922. 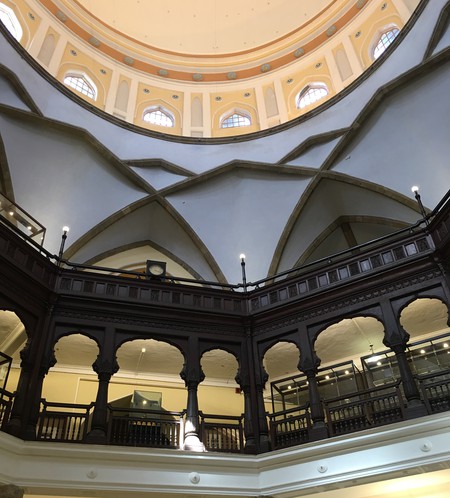 The architect for the museum, George Wittet, was selected through an open design competition in 1909. Wittet, a Scottish architect, built the museum in Indo-Saracenic style. Indo-Saracenic architecture combines traditional Indian architectural elements – defined by its onion domes, small jails, and arched pavilions – with Western Gothic elements. Wittet went on to design the nearby Gateway of India and CJ Hall, now NGMA. Sadly, he died in Bombay due to acute dysentery, cutting short his career, and lies buried in Sewri Cemetery. 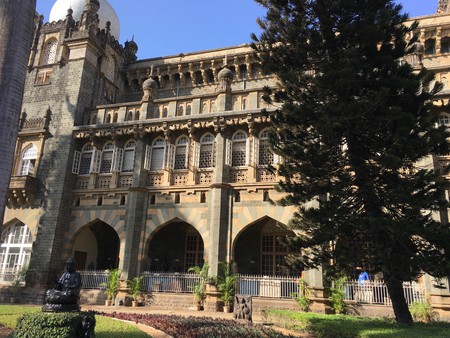 Wittet came to Bombay as an assistant to Begg, then consulting architect of Bombay. The story about how the design of the museum came to be, goes like this: Wittet, on arriving in Bombay and seeing GPO, then under construction, is said to have exclaimed, ‘Why has Begg gone for this stuff? Why hasn’t he done a good Renaissance building.’

Begg promptly sent young Wittet to Bijapur to study the grandeur of Indo-Saracenic architecture. Wittet became convinced, and the influence is visible in his design of the museum, except his original design wasn’t Indo-Saracenic. (Referenced from A Joint Enterprise: Indian Elites and the Making of British Bombay by Preeti Chopra) 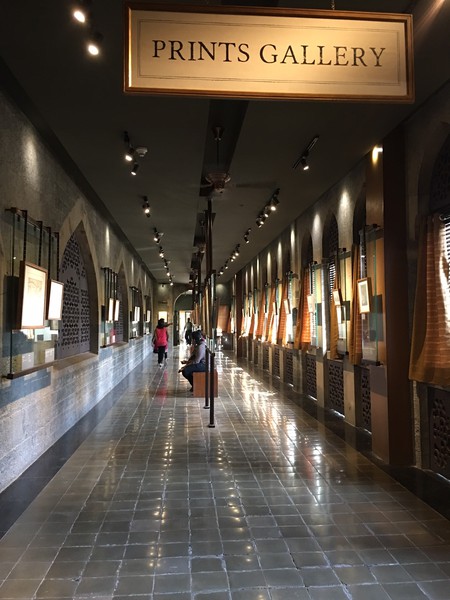 The museum started with art, archeology and a natural history section. However, many other galleries like print and textile have been added over the years. With its wide range of exhibits, CSMVS has something of interest for everyone.

The Nicholson Art Gallery has Tyeb Mehta, S.H. Raza and F.N. Souza on display. The Pre- and Proto-History Gallery has collectibles from the Mohenjodaro and Harappan civilizations to entice history buffs. The Natural History Gallery, with its illustrations and animals in actual habitats, is a hit with children. 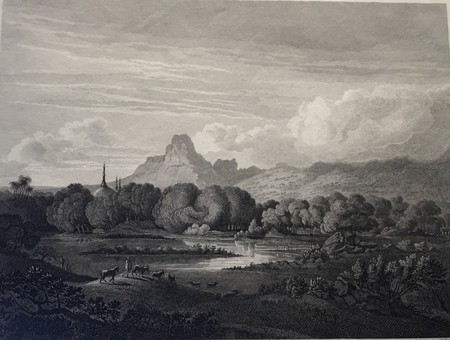 View Of Panwell, Credits: From the Collection of Pheroza and Jamshyd Godrej (on loan to CSMVS) | Courtesy of Sangita Sinha

The Prints Gallery showcases Bombay of another era. View of Panwell by Henry Salt showcases Panwell (today’s Panvel) surrounded by mountains, situated on the river Pan. The Numismatics Gallery, or coins gallery, has collections from various dynasties – from the era of Chandragupta to Shivaji Maharaj and Emperor Jahangir. One can also try their hand at printmaking, using a 16th-century-styled printmaker’s tool box.

Exploring the two-floored museum in one go can be tedious but rewarding. Here, we bring you the top few exhibits from the collection. 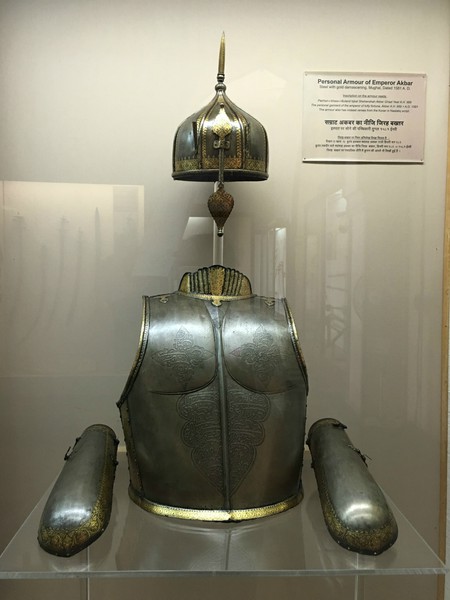 Akbar’s Armour consists of a helmet, breastplate and two arm guards. The Persian calligraphic inscription on the collar reads:

The breastplate is made of high-quality watermark steel and has distinct damascened (gold inlay on steel) work. The armour also has a high collar to protect the throat of the emperor and is mostly shaped to Akbar’s torso.

The shield is inscribed with 12 zodiac signs, showcasing his interest in astrology.

While here, don’t forget to check the sword of Allauddin Khilji, inscribed with ‘Help From Allah and Speedy Victory,’ and the sword of Shah Jahan. (From Sir Ratan Tata Art Collection) 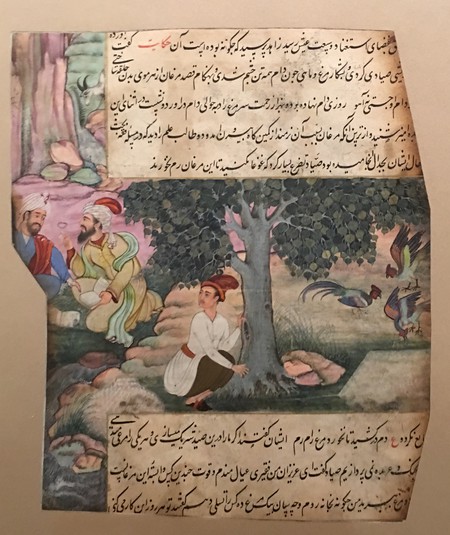 Commissioned by Akbar in 1588, this is a Persian translation of Kaliah-wa-Dimnah, an Arabic version of Panchatantra. Anwar-I-Suhayli is a synonym for wisdom. Translated it means ‘The Lights of Canopus’ – Canopus is one of the brightest stars in the nighttime sky. This richly illustrated manuscript was housed in Poona and was nearly destroyed in a fire. Saved by an art lover, today it adorns the walls of the museum, showcasing the elaborate work of the times.

One can also see Kaliah-wa-Dimnah in the Miniature Painting section. 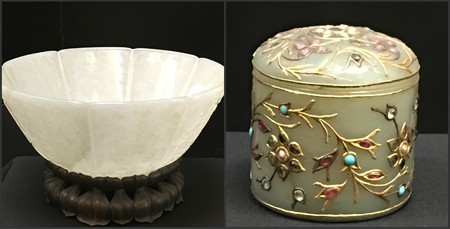 Jade is a semi-precious stone known for its healing qualities. Even the name Jade comes from the Spanish term ‘piedra de ijada,‘ meaning ‘loin stone,’ for curing ailments of loins and kidneys.

The Mughals were enamored by it as it was symbolic to their Central Asia origin. Also, its mythical ability to counteract any poison made it immensely valuable. The Mughal jades were exquisitely carved and of high quality. Jade bowls made with these jades received accolades across the borders, especially in China.

The bowl shown above has a translucency that allows design on the outer surface to be visible from inside. 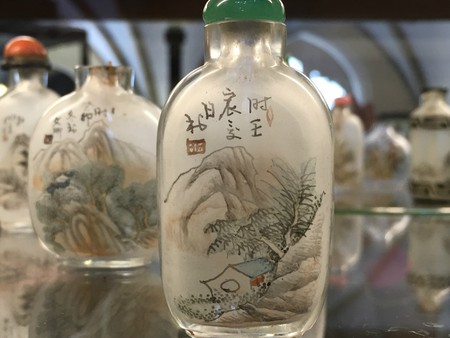 All the rage during the Qing Dynasty (1644-1912), snuff bottles contained a mixture of powdered tobacco and powdered spices. Even though smoking tobacco was illegal, snuff was considered medicinal and, therefore, exempt. Snuff bottles came out in different materials, including jade, porcelain, and ivory; however, the most common were the glass varieties. Small enough to fit in the palm, intricately carved and decorated, they soon became a collector’s item.

Apart from regular galleries, CSMVS also has temporary exhibits, which have been very successful.

Mummy: The Inside Story, in collaboration with The British Museum, London, reconstructed the life and times of Nesperennub, an Egyptian mummy who lived 3000 years ago, using advanced forensic techniques. Recently, Look Up Mumbai reflected the diversity of Mumbai architecture through the beautiful ceilings of iconic buildings. Tabiyat: Medicine and Healing in India, an exhibit in collaboration with the Wellcome Trust, London, highlighted the history and contemporary practices of the healing system and finished its run in March.

Fun Fact: Akbar’s armour was on display in the museum for 75 years before its ownership was established.

All the images are owned by the writer.