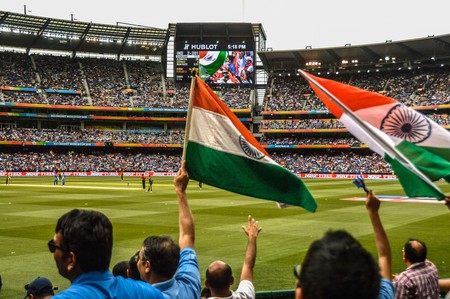 Cricket and Bollywood are India’s two greatest loves. It’s only natural that the country will look for ways to combine both, particularly in the form of stellar cricket-based Bollywood flicks. Here is a list of seven films based on cricket that show just about how integral the sport is in the day-to-day lives of Indians.

This Amir Khan starrer classic about a group of villagers in Colonial India who challenge the local British presence to a game of cricket in order to get their land tax waived, is among the most celebrated films of 21st century Bollywood cinema. We follow them as they train themselves to play and eventually master a game they had no prior knowledge of, to ease the financial burdens on their drought inflicted village.

This Natonal Film Award winning film follows the journey of a deaf mute boy from a small village who aspires to be a cricketer and eventually play for the national cricket team. Overcoming opposition from his father who wants him to work on the family farm instead as well as criticism and doubt from society, the young man pursues his dream in one of the most inspiring sports dramas in recent Bollywood cinema.

This real life story of Mahendra Singh Dhoni, one of India’s most celebrated cricketers, went on to receive one of the widest releases ever for a Bollywood film. Following the legendary cricketer’s journey from being a railway ticket examiner for the Indian railways to a World Cup winning team captain, this film is a must watch for true fans of Indian cricket.

Set against the backdrop of deadly Hindu-Muslim riots that took over the state of Gujarat in 2002, this film follows the story of three cricket-obsessed friends who set up a sports store and academy to train young cricketers. Focusing on a lot more than cricket, to include politics, religious tensions, social and familial issues, this film captures how the sport is part of everyday life for a lot of Indians.

Inspired by and drawing from the life of former cricketer and national team captain Mohammad Azharuddin, this is yet another film that will let you effortlessly delve into the world of Indian cricket. The film follows the cricketer’s journey with the sport, primarily revolving around a cricket match-fixing scandal that ended his career and got him banned for life.

This quirky Bollywood romantic comedy follows the story of a Punjabi village girl who dresses up as a man to play with the male cricket team with aspirations of eventually playing with the national cricket team. Yet another tribute to the sport’s integral position in everyday life, Dil Bole Hadippa also brings attention to the disparity in opportunities available to women and men to play cricket in India.

This 2007 Bollywood comedy follows the stories of several Indian cricket fans around the world just as the nation gets gripped by cricket World Cup fever. Also including the stories of a few who dislike the sport, this movie has something that almost everyone can relate to.