Bollywood Fashion Through The Ages 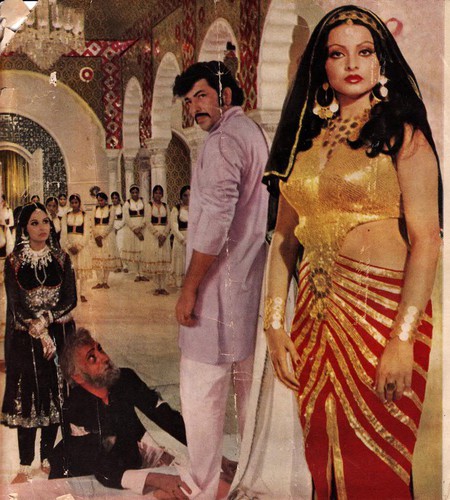 Ever since the advent of Hindi cinema in the 1930s, Bollywood and fashion have gone hand in hand. Whether its regal floor-length anarkalis or Patiala pants paired with long t-shirts, sweaters draped over shoulders, or the peeking waistband of designer underwear, our films have influenced the sartorial sensibilities of generations. Here’s a look at some of the most notable trends of the past few decades.

In the years of World War II and the struggle for independence, Bollywood fashion was modest, understated and formal. Most movies were shot in rural settings, with the men clad in dhotis and women in ghagra-cholis. The few films featuring urban characters were inspired by European fashion, with dapper suits for the men and elegant sarees for the likes of Meenakumari, Nargis Dutt, and Suraiya. Puff sleeves were in fashion and women on screen were seen wearing pants for the first time. Hair was worn in graceful buns while pearls were a staple piece of jewelry.

The 1960s are perhaps best remembered as the decade that gave us the anarkali kurtas worn by Madhubala in Mughal-e-Azam, the iconic saree drape donned by Mumtaz in Brahmachari, and the fringed hairstyle that is to date called the ‘Sadhana cut‘ in honor of the actress who popularized it.

As for the men, it was the decade when Dev Anand (inspired heavily by Gregory Peck) draped a sweater over his shoulders, a trend that was replicated years later by Shahrukh Khan in Mohabbatein. Shorter, tighter blouses, a hint of skin, and bold makeup were the hallmarks of Bollywood fashion in the 1960s. The iconic winged eyeliner and big puffy hair was all the rage. Costume designers like Bhanu Athaiya started experimenting with film fashion, initially working on period costumes in Sahib Bibi Aur Ghulam (1962) and Amrapali (1966). 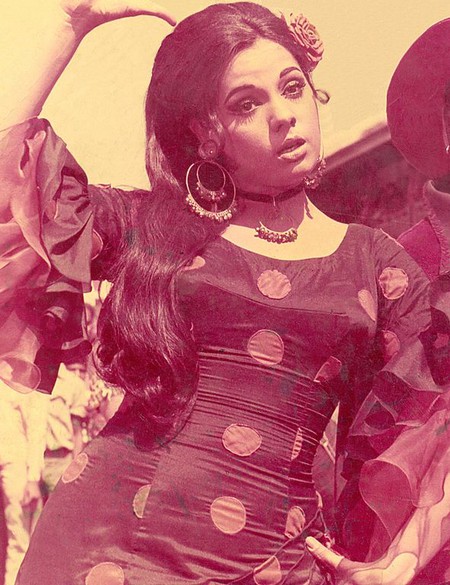 Shoulder pads, chunky accessories, and an overdose of metallic colors made the Bollywood fashion of the 1980s look gaudy and over the top, at least in retrospect. It is also remembered as the decade that ushered in sheer materials such as chiffon to popularize the sensual look. One of the most-loved styles of this time was Sridevi’s gossamer saree in the hit film, Mr. India. Neon colors and statement red lipstick became popular, as did leg warmers and unruly hair. The 1980s were also notable for the emergence of the first generation of Indian fashion designers such as Rohit Khosla and Satya Paul.

The 1990s saw pants give way to skirts, and flaunting skin was no longer taboo. The saree, however, continued to rule, with Madhuri Dixit’s purple embroidered number in Hum Aapke Hain Kaun especially standing out.

In 1989, Salman Khan kicked off the men’s fitness trend, showing off a great body in his first ever leading role as Prem in Maine Pyar Kiya. A few years later, Karisma Kapoor pioneered the women’s fitness trend with her role as the feisty dancer Nisha, in Dil to Pagal Hai. This super-hit musical romance, along with the blockbuster Kuch Kuch Hota Hai popularized sportswear as casual daytime attire, while also ushering in the age of brand consciousness.

Going the designer way in 2000 and beyond

21st-century Bollywood fashion is all about who to wear. International brands and fashion designers such as Tarun Tahilani, Manish Malhotra and Neeta Lulla take center stage. With specific ‘looks’ being designed for characters rather than the actors portraying them, we see an eclectic mix of ethnic and western styles. Memorable looks that caught on with audiences include the relaxed urban styles worn in Dil Chahta Hai, the ornate jewelry seen in Devdas, the chic salwar-suits in Veer Zaara, the fusion fashion of Bunty Aur Babli, and Aamir Khan’s Ghajini hairstyle.

Six-pack abs became all the rage with Hrithik Roshan’s look in Kaho Na Pyar Hai, and Kareena Kapoor picked up where her sister Karisma left off, stunning audiences with her super-fit size zero body in Tashan (2008). Today, exclusive designs continue to rule Bollywood fashion, with trends changing almost as often as films at the box office. Even when a film fails to enthrall audiences, its fashion quotient is often worth noting.

© Yash Raj Films
Give us feedback