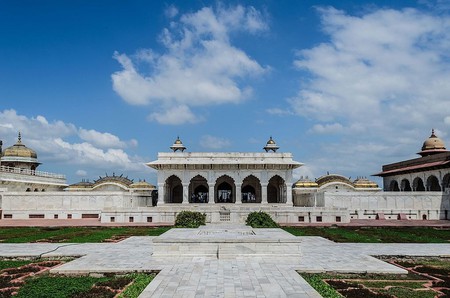 The Taj Mahal is the most iconic landmark in India and it attracts nearly two million visitors every year. However, there’s lots more to the historic Taj City than just this majestic ivory-white mausoleum. Here are the best things to see and do in Agra, beyond the Taj Mahal.

Take a tour of the historic forts

Agra has a rich history and reminders of this are spread throughout the city. One of the finest historical sites is the 16th century Agra Fort, which is reminiscent of the Mughal era. A UNESCO World Heritage Site, the fort is built using red sandstone and beautified with inlay work in white marble. Inside the fort lies stunning structures, like Khas Mahal, Jahangiri Mahal, Shish Mahal (mirror palace), Diwan-e-khaas (hall of private audiences), Diwan-e-aam (hall of general audience), Moti Masjid (Pearl Mosque) and Nagina Masjid (Gem/Jewel mosque), which are truly mesmerizing. Another striking fort is the Sikandra Fort that lures visitors in with its stunning architecture, which is a blend of Hindu and Muslim styles, intricate carvings and exquisite marble work. The tomb of a powerful Mughal Emperor, Akbar, also resides in this fort. 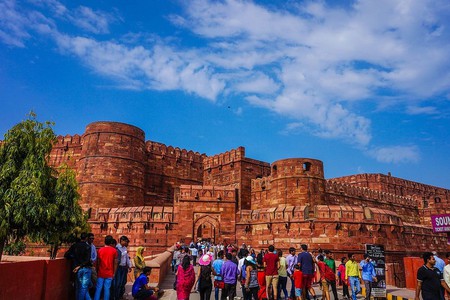 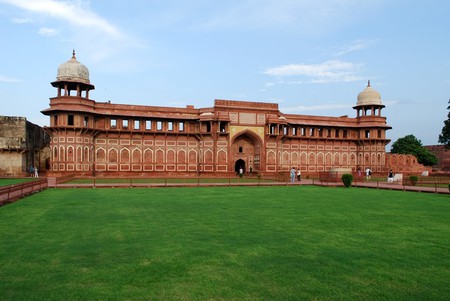 Marvel at the magnificent tombs

There are two tombs that were built before the Taj Mahal, Akbar’s Tomb and theTomb of I’timād-ud-Daulah, but both are often overshadowed by it. Beautifully preserved, the tombs are historical and architectural marvels that provide an insight into the bygone era. Spread over a sprawling 119 acres of land in Sikandra, Akbar’s Tomb contains the remains of the Mughal Emperor, Akbar. Speaking of the design aesthetics, the tomb is a four-tiered pyramid made of deep red sandstone and enhanced with white marble, intricate carvings and calligraphic and floral designs. Just a stone’s away from Akbar’s Tomb lies another tomb, the Tomb of Mariam-uz-Zamani (wife of Emperor Akbar and mother of Jahangir). 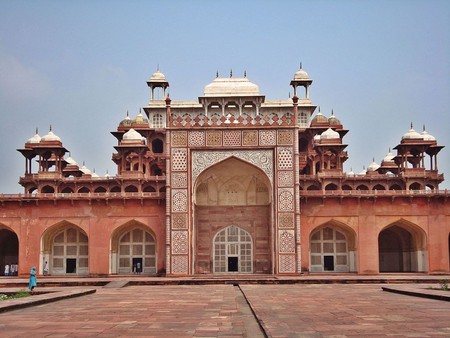 Another tomb worth visiting is the Tomb of I’timād-ud-Daulah, which is an antithesis to the characteristics of Mughal architecture. It was the first mausoleum to be built out of white marble instead of red sandstone (this exemplifies Mughal architecture). Also called ‘Baby Taj’, the tomb has been built with the same cut-out stonework (Pietra dura) and elaborate carvings as the Taj Mahal. A particularly appealing feature is the 13 metre-tall hexagonal towers at each corner of the structure. Surrounded by beautiful gardens, this mausoleum is an equally opulent structure that oozes beauty from every corner. 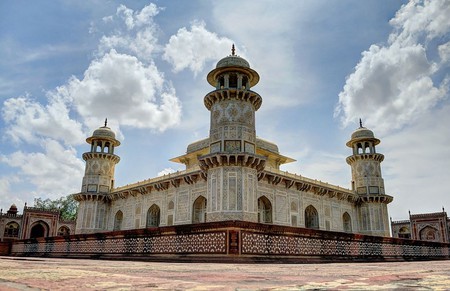 Built in 1648 by Mughal Emperor, Shah Jahan, Jama Masjid, also called Jami Masjid, is one of the largest mosques in the country. This majestic red sandstone mosque took six years to complete and can accommodate over 25,000 devotees at any given time. It is an impressive architectural masterpiece with intricate white marble decorations, four towering minarets and a stunning courtyard adorned with high arches. Also, there are several chattris over the sanctuary, which add to its appeal. 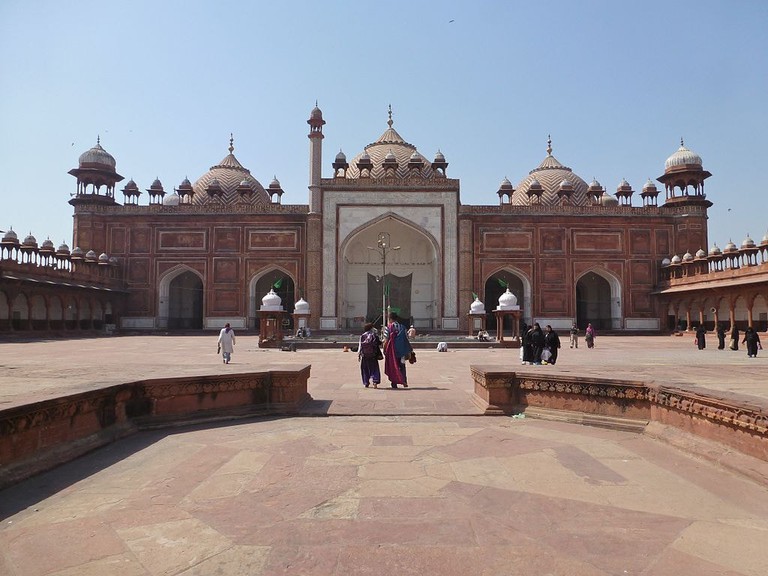 Stroll through the Mehtab Bagh

To the north of the Taj Mahal lies the picturesque Mehtab Bagh, which is a four garden (char bagh) complex. Nestled on the embankment of the Yamuna River, the garden is home to a wide variety of plant species. Its crowning glory is its breathtaking view of the Taj Mahal from the garden, especially during sunrise and sunset – it’s a sight to remember!

Situated approximately 500 metres from the east gate of the Taj Mahal, the Taj Nature Walk is a serene and quiet 173-acre park that features beautiful walking trails, watchtowers and rest spots. The highlight of the park is its glorious vista of the majestic Taj Mahal from different angles. Also, while wandering through the park, you’re likely to encounter beautiful birds, such as hoopoes, peacock and more. There is an entry fee of INR 100 ($1.56) for foreign national and of INR 20 for Indians.

Shop at the Kinari Bazaar 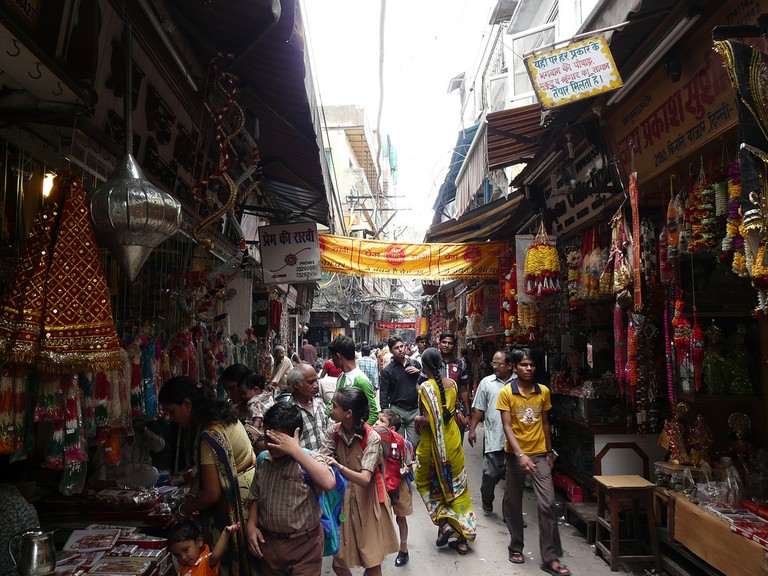 A narrow, busy street of Kinari Bazaar | © Varun Shiv Kapur/ Flickr
Historic and bustling, the Kinari Bazaar is a one-stop shopping spot in Agra. Situated in the narrow alleys behind the Jama Masjid, the bazaar is a veritable treasure trove, brimming with petite colourful shops selling everything from clothes and accessories to jewellery, spices, marble items, shoes, wedding garb and other knick-knacks. There are a few snack stalls dotting the bazaar, which make for a perfect pit-stop, should you need to replenish your energy. Even if you do not want to buy anything, just strolling the streets and soaking in the wonderful sights and sounds can be equally remarkable.
Open In Google Maps
Kinari Bazar, Hing ki Mandi, Mantola Agra, Uttar Pradesh, 282003, India
Give us feedback

An hour west of Agra lies the historic city of Fatehpur Sikri. Founded by Akbar, it was once the capital of the Mughal Empire but was abandoned following a water shortage in the region. Today, the city is home to several ancient structures, waiting to be explored. Highlights include the 55-metre tall Buland Darwaza, the Tomb of Salim Chishti, the Panch Mahal, the Elephant Tower (Hiran Minar) and Birbal’s house. 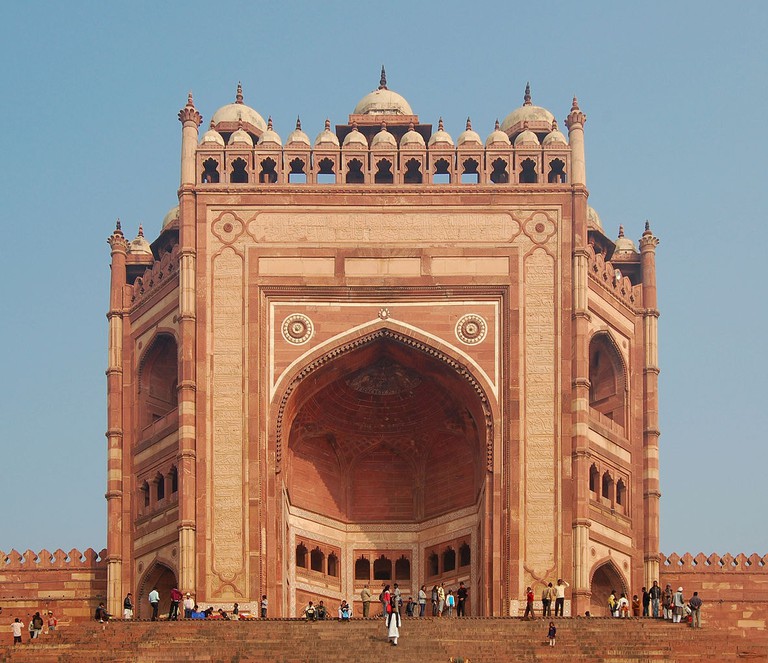 On the Agra-Fatehpur Sikri highway lies Korai, a tiny rural hamlet. It is home to the Kaladhar tribe, who were once bear tamers. Today, the tribal people earn their livelihood through day tours in and around the village. Visitors can spend a day here and experience their village life. The villagers are more than happy to entertain guests and educate them about their culture and lifestyle. For a day tour, you need to fill out a form online and the visiting charge is INR 10, which is used for the welfare of the village.

Interact with and feed bears at the Agra Bear Rescue Facility

If you’re an animal lover, this is a must-visit place. The Agra Bear Rescue Facility is the largest bear rescue centre in the world, housing over 200 rescued sloth bears. However, it also provides shelter to several other animals, such as leopards, tigers, elephants and more. Two-hour guided tours are on offer, which include a documentary on the dancing bears of India, as well as allowing visitors to get up-close and personal with bears and other animals.

An unmissable place in Agra is Sheroes’ Hangout, a cafe run by five acid-attack survivors. The cafe is a first-of-its-kind in the country and serves as a platform to raise awareness to stop acid attacks. The walls are adorned with graffiti and art and the ambience is warm and welcoming. Visitors can relish in delicious fare, plus there is a library and a boutique on the premises to explore. Another interesting thing about this cafe is that it operates on a pay-as-you-wish basis.