The Best Bollywood Comedies You Need To Watch Right Now 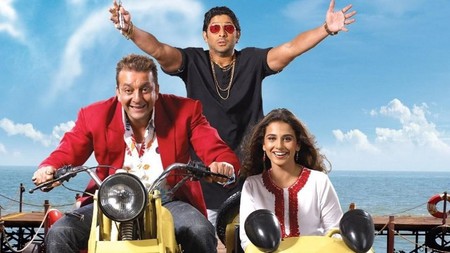 Prepare for a marathon of laughs with these seven hilarious Bollywood comedies from across time. From sharp satire to pure slapstick comedy, these films have got all your comedy needs covered.

A cherished all-time favourite among Bollywood fans, this hilarious film follows Amar and Prem in their journey to win the affection of Raveena, a multi-millionaire’s daughter in search of a bridegroom. Starring Aamir Khan, Salman Khan, Raveena Tandon and Karisma Kapoor, this film is packed with hilarious dialogues and amusing, over-the-top acting.

Following two tabloid photographers who stumble into a web of conspiracy, we get this hilarious satire on corruption in Indian politics, bureaucracy and media. Starring Naseeruddin Shah, Ravi Baswani, Om Puri and Bhakti Barve, among others, this film is one of the biggest cult classics in Bollywood history.

Parimal, an easy-going academic becomes jealous of his wife’s admiration for her highly intellectual brother-in-law, Raghavendra. The two of them then scheme to prank Raghavendra, with Parimal disguising himself as a driver in search of a job. A hilarious comedy ensues, starring Dharmendra, Sharmila Tagore, Amitabh Bachchan, Jaya Bachchan and Om Prakash.

Starring Kishore Kumar and his brothers Anoop Kumar and Ashok Kumar, this classic follows the journey of three brothers who’ve sworn off love after the eldest of them finds himself deserted by his lover. When the younger brothers find themselves falling in love with two women, we’re in for continuous hilarity and light drama.

Recent graduate, Ramprasad, a multi-talented youngster with many hobbies, finds himself having to take up a job with Bhavani Shankar, known for his oddly vehement opposition to his employees engaging in any recreational activities. When caught by his boss during a neighbourhood hockey match, Ramprasad panics and invents an identical twin to save his job. True to its name, which translates to mayhem, the ensuing laughing riot is among Bollywood’s best.

Sunil Dutt stars as the simple Bhola, who is attempting to woo his sophisticated neighbour, Bindu (played by Saira Banu). Aiming to impress Bindu, an avid music fan, Bhola enlists the help of his musically-inclined friend Vidyapati, played by the hilarious Kishore Kumar. Time and time again considered one of the funniest Bollywood films ever made, this is one to watch without excuses.

Starring Sanjay Dutt as Munna Bhai, a notorious Mumbai goon who suddenly finds himself spirited to enroll in medical school to fulfill his father’s wish of seeing him as a doctor, this modern classic is among Bollywood’s finest. Featuring Arshad Warsi as loyal and hilarious, Circuit, Munna’s sidekick and Boman Irani as loveable villain, Dr. Asthana, Munna Bhai M.B.B.S. will make you laugh, weep and then laugh some more.