Becoming A Mountain: A Tête-à-Tête With Stephen Alter 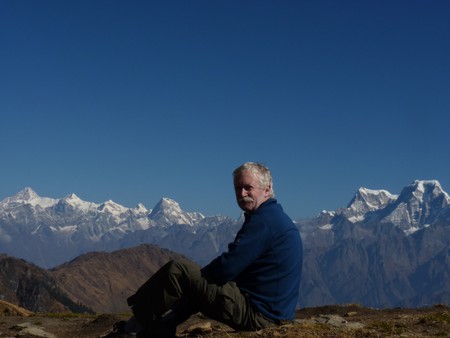 Stephen Alter was raised by American missionary parents in the hill station of Mussoorie where he and his wife, Ameeta, now live. Having spent his formative years in what could be literally termed the ‘lap of the Himalayas,’ Alter took to writing about nature in addition to travel and creative fiction. At a talk hosted by the Godrej India Culture Lab in Mumbai recently, Culture Trip Mumbai caught up with Stephen Alter and talked to him about all things nature.

A keen outdoorsman, Alter described instances where he found himself lost (pleasantly) while trekking in the woods and the experiences that can be termed sublime. Spellbound by the sheer beauty of the places Alter visited and the simplicity of his narrative, we decided to probe further with a few questions.

Tell us about your childhood. What were some of your early impressions that instilled a love for nature in you? By nature, I don’t mean in an abstract way. This love for the unbounded woods, a desire to scout through dense forest often fraught with peril – what led you to it?

I grew up in Mussoorie where our home is surrounded by forests. From an early age, my parents allowed me to wander and explore. I was always interested in collecting things – beetles, feathers, leaves, almost anything I found along the path. My curiosity for the natural world led me to try and identify as many different plants, birds and animals as I could. Living in the foothills of the Himalayas is like being surrounded by a limitless library of facts and stories from nature.

What inspired you to want to write about your experiences?

Telling stories is something I’ve always enjoyed, whether the subject is trees, birds, animals or people. It’s a way of sharing the magic and mystery of being outdoors.

What is your message for today’s ‘naturalists’ or camera-toting big game shikaris?

Some of the cameras that people carry into the forest these days look like artillery weapons. I’m sure they take great pictures, but sometimes it’s a good idea to leave technology behind and record your impressions only in your mind’s eye.

Your books All the Way to Heaven, Amritsar to Lahore and now, Becoming a Mountain are your narrative accounts as an observer. Do you consider yourself to be an outsider? Not in the literal sense of a Caucasian among South Asians. You have lived for a long time in India and are well versed with its people and culture. But deep down, do you consider yourself to be sufficiently distanced to call yourself an observer?

To be a good observer, you need to be something of an outsider. The distance this creates provides perspective and a broader vision. At the same time, particularly with a book like Becoming a Mountain, my goal was to absorb myself in the landscape and try to understand the intimate and enduring connections between myself and the world around me.

Tell us something about your experiences in your various travel forays. For example, you getting lost in the Rhododendron forest, the man who had the British insignia from Mountbatten’s car in Pakistan.

Wherever you go, there will always be things that are difficult, if not impossible, to explain. For example, on the north side of Mt. Kailash, someone had placed a billiards table, which was now being used as a rubbish heap. Who would have brought it there and why? There are so many memorable images from my travels, as well as unique characters I’ve met along the way. That’s what gives a narrative its element of surprise and novelty.

Lastly, what led you to Become a Mountain?

This book and the journeys it describes were all part of a process of healing, following the attack my wife and I suffered in 2008. By immersing myself in Himalayan landscapes, I was seeking solace and an escape from fear, anger and discontentment.

Stephen Alter is the author of more than 15 books and much of his writing focuses on the Himalayas. The Secret Sanctuary (Puffin, 2015) is his most recent novel for younger readers. Alter was writer-in-residence at MIT for ten years. He is founding director of the Mussoorie Writers’ Mountain Festival. Among the honors he has received are fellowships from the Guggenheim Foundation, the Fulbright Program, the East West Centre in Hawaii, and the Banff Centre for Mountain Culture. He is this year’s recipient of the Kekoo Naoroji Book Award for Himalayan Literature.

Pravin is many things at once, ranging from business consultant to wildlife photographer but hobby writing, reading and wildlife are close to his heart. He also runs a book exchange club in Mumbai called Swapbook! and you can also find him on Facebook here.