The Most Beautiful Wedding Venues in India 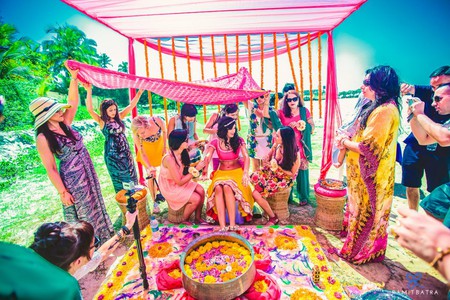 The vogue in India is to have a fairytale destination wedding akin to the rest of the liberal world. With the new-found penchant for destination weddings, the Indian hospitality industry is jumping on the bandwagon establishing some immensely stupendous wedding venues over the years. Here is a list of the most beautiful wedding venues in India that includes opulent palaces, grand hotels and sun-kissed beaches.

Udaipur—also known as the City of Lakes—in the state of Rajasthan has a historical reputation that precedes itself. Home to the Mewar and subsequent dynasties for centuries, Udaipur is a lavish town characterized by glorious palaces, chief among them — The City Palace. This massive palatial complex has a series of exquisite houses that serve as wedding venues occasionally; Zeena Mehal, Manek Chowk and Shivniwas Palace popular among them. And, that’s besides the serene Pichola Lake that beautifully encompasses the City Palace. 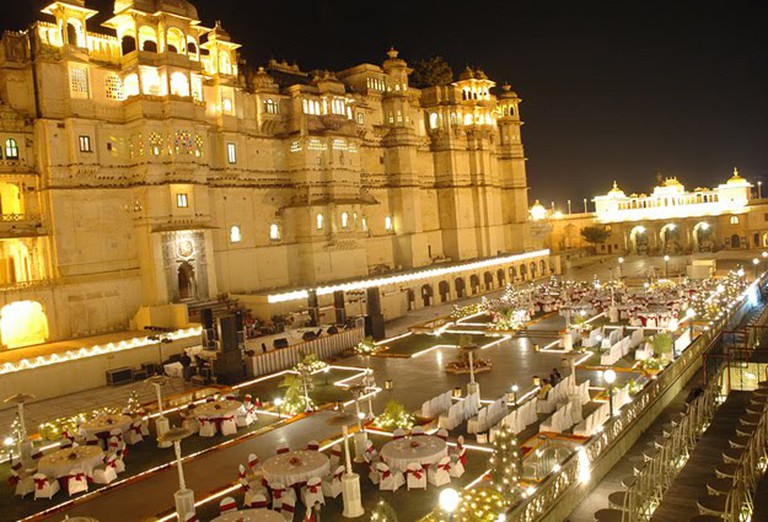 The former residence of the Maharaja of Jaipur and now a Taj group luxurious hotel, Rambagh Palace in Jaipur is an epitome of Indo-Saracenic architectural style. The capital of Rajasthan, Jaipur, is home to several treasured palaces, yet the popularity of Rambagh Palace has gone beyond the realms of ‘Pink City’ Jaipur, luring celebrities from abroad to wed here. 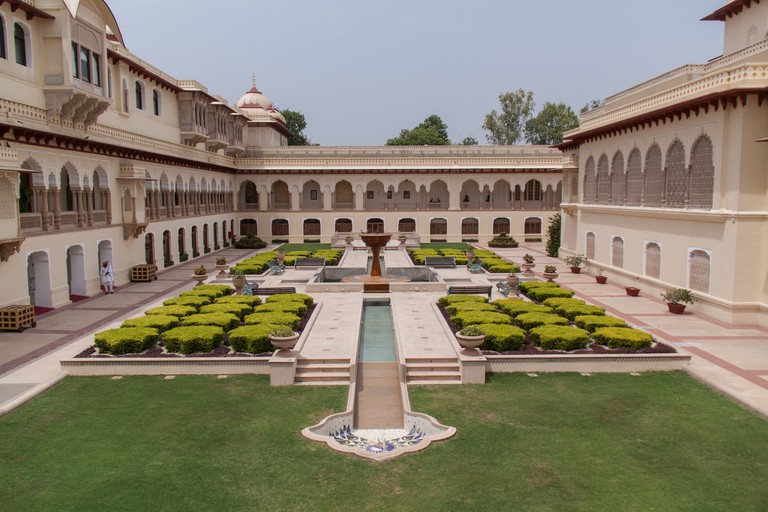 The vast area surrounding the Bangalore Palace accommodates events such as weddings, concerts and auto shows every now and then. A few companies have established splendid wedding halls at the periphery of the Tudor-style Bangalore Palace that has witnessed extravagant weddings of the elite from Karnataka over the years.

The eclectic amalgamation of architectural styles defines a majestic sandstone palace in the state of Rajasthan, Umaid Bhawan, named after its creator Maharaja Umaid Singh. The palace is adorned with lavish gardens, spacious grandiloquent halls and embellishments reflecting Rajasthani traditions. Umaid Bhawan has three wings primarily, a museum, a private residence of the royal family and a luxurious hotel from Taj group. The latter is responsible for one of the best wedding venues India has to offer. 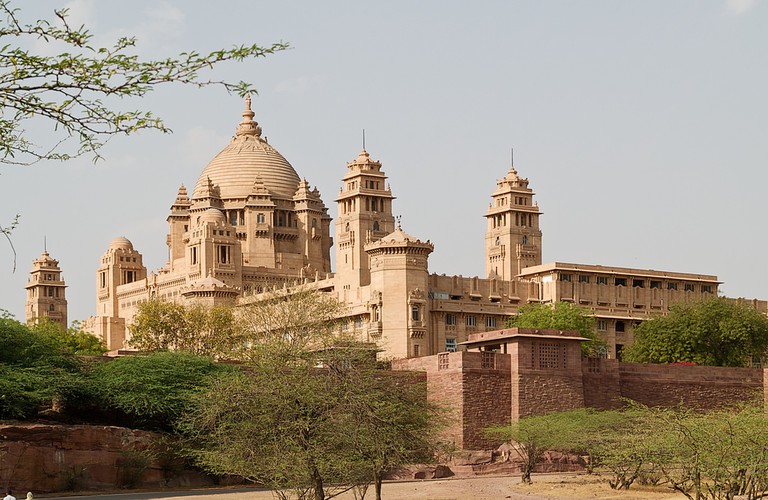 It doesn’t get more Indian than getting into wedlock within the magnificent havelis of Rajasthan and Suryagarh is just the place for it. As the traditions of Rajasthan dictate, marriages in Suryagarh are often accompanied by folk music and customary dance. The setting is opulent with golden hues and to top it all, a camel ride is on offer.

From the sumptuous list of Taj’s repertory comes another exotic wedding venue in the form of Jai Mahal — located in Jaipur, Rajasthan. The marvelous Mughal gardens sets the tone for Jai Mahal, which is an architectural marvel in itself. The decor at Jai Mahal is predominantly Rajasthani and amenities are state-of-the-art, thereby striking a fine balance between heritage and refinement.

“Join me for dinner at the palace tonight” = things you can say when you stay here. Head over to TripAdvisor to book the Jai Mahal Palace, a real-deal #Jaipur, #India palace that dates back to the 1740s! #hotelgoals

There are regal weddings and then there are regal weddings in Neemrana Fort. Being one of the oldest heritage sites in the country, Neemrana Fort is second-to-none when it comes to grand venues with a brush of royalty. The fort is situated equidistant on the highway between Delhi and Jaipur, and the massive fortifications mean you can’t miss it. Lush rooftop gardens, standout gazebos and an elevation overlooking the immensity of the desert is what fairytale weddings are made of. 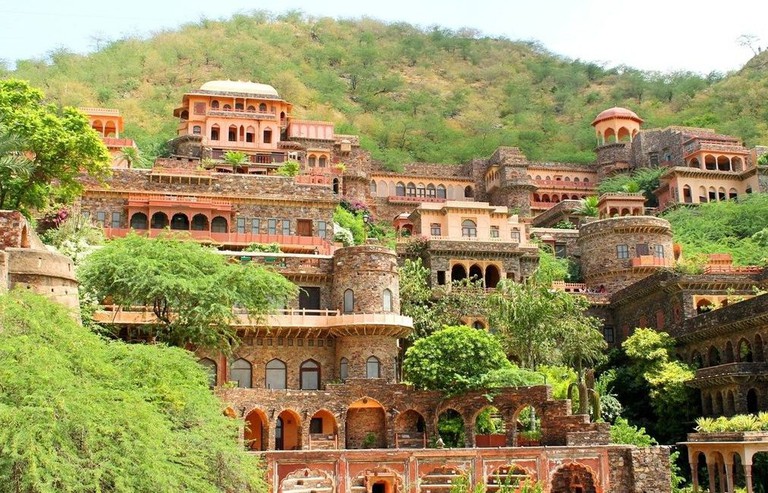 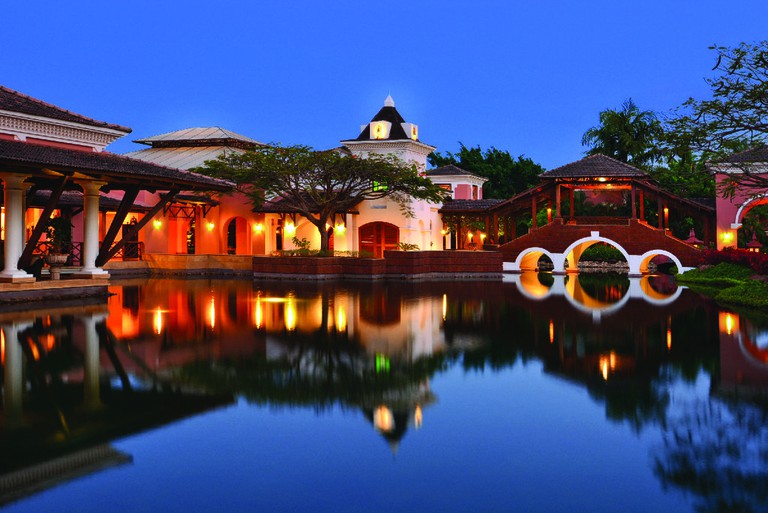 Beachfront weddings will never go passé. In that respect, Park Hyatt Resort and Spa epitomizes beachfront weddings in India with their shimmering lagoons, spacious ballrooms and serene private beach. The sumptuous resort lies inconspicuously on the Arossim Beach masked by the plentiful gardens and the towering palm trees.

The stunning Taj Falaknuma Palace in Hyderabad bears witness to the glorious bygone era of the Nizams. The palace is equal parts, Nizam grandeur and architectural marvel. If the striking amalgamation of Tudor-Italian architecture doesn’t transfix, then the Venetian chandeliers will certainly leave visitors spellbound.

#Repost @solarzen with @repostapp Feeling royal at Falaknuma palace, looking over old city Hyderabad. Falaknuma is a palace in Hyderabad, Telangana, India. It belonged to Paigah Hyderabad State, and it was later owned by the Nizam of Hyderabad.It is on a 32-acre area in Falaknuma, built by Nawab Vikar-ul-Umra, prime minister of Hyderabad. Falak-numa means "Like the Sky" or "Mirror of the Sky" in Urdu. #TajHotels #TajFalaknumaPalace

Fancy a rousing cliff-top wedding overlooking the limitless horizons of the Arabian Sea? In that case, Leela Kovalam in the aesthetic state of Kerala is perhaps the place you should be headed to. The tranquility and warm sea breeze will set the right tone for your union and The Leela’s services will not only leave you gratified, but also keep coming back for more.