An Introduction to Kolkata's Traditional Dress 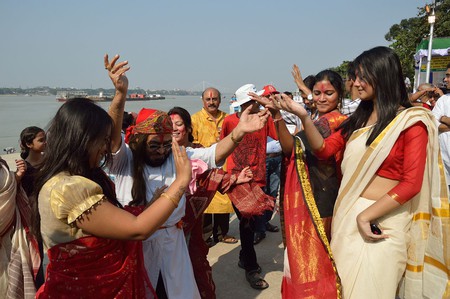 Chances are that one of the first images conjured by a non-Bengali Indian’s mind on the thought of Kolkata is of the classic rich maroon-and-white Bengali saree. It may only be during festival season that traditional attire truly makes a statement in today’s Kolkata, yet the region’s distinct styles of clothing is symbolic of its contribution of a rich cultural heritage to the rest of the country.

Traditional attire for Bengali women is usually the saree, usually made of cotton or silk. While sarees are worn by women across India, the Bengali style of pleating and draping a saree is quite distinct.

Of all the various styles of sarees donned by Bengali women, the quintessential red-and-white sarees – the Korial, the Garad and the Tant – are perhaps the best known, particularly because they are worn en masse during the state’s Durga Puja festival celebrations. However, few people outside the state understand the significance of this particular colour combination. With the white symbolising purity and the maroon or red symbolising fertility, the saree is a celebration of the feminine. The off-white Korial saree usually features a red border and is worn with a red blouse. The Garad is another traditional Bengali saree in the same colour combination, but with a broader red border and printed patterns. Tant sarees are another Bengali wardrobe staple, made of cotton.

But as we all know, Bengal’s saree tradition is richer than the red-and white-variants. After all, the state has a rich history of weaving silk. Of all the many other traditional sarees worn by Bengali women, the Baluchari, Murshidabad and Tussar silk sarees are particularly well known in the rest of the country.

Traditional attire for men in Bengal usually consists of the dhoti, a piece of cloth tied around the waist and then wrapped around like a loin cloth between the legs – as is worn around the country. Dhotis are paired with a silk or cotton Punjabi or kurta – a loose fitting shirt which usually goes down to the knees. While white and off-white are the traditional colours dhotis and Punjabis are worn in, today’s Bengali men may take their liberties with colours of their traditional attire.

Where to find your own

There’s a traditional attire store in pretty much every neighbourhood and sub-neighbourhood in Kolkata. Rangoli has branches on Park Street and RashBehari Avenue Road, while Kanishka in Kalighat will be the perfect destination if you are looking for a smaller boutique experience.