Along The Ganges: The Cultural Attractions Of India's Holiest River

As the longest river in India, the Ganges has a strong presence within the Hindu religion and is considered the backbone of activity within India. Hindu people believe the river to be sacred and holy, and many make the pilgrimage to the city of Varanasi to wash away their sins in the water. Being of such importance, millions of people visit the Ganges, making it a powerful hub of religious activity, culture and history.

Originating in ancient India, yoga holds a significance in Indian culture due to its spiritual importance which leads to a state of peace. There are various different types of yoga, with Hatha being the version that has dominated mainstream yoga cultures. Yoga schools and centers hold classes for students of all abilities as well as offering diploma courses, and many of these esteemed schools can be found in Vanasai. Around the Ganges River, there are also yoga retreats for visitors to stay beside the river and connect with its spiritual power. Rishikesh is nicknamed the capital of yoga and was especially celebrated when The Beatles stayed at an ashram during the 1960s. It has endless options for ashrams, yoga and meditation, and the town of Haridwar is a good alternative destination, attracting natives as opposed to swarms of tourists. 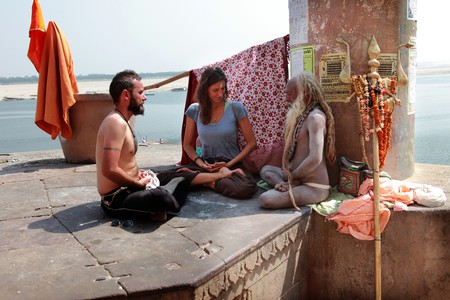 Known also as Banaras or Benares, the city stretches along the bank of the River Ganges and has been a prominent religious city since the sixth century BC. The city has raised famed and influential Indian scholars, academics, philosophers, poets and musicians. Legend has it the city of Varansai originated from the God Shiva, making it the holiest of the seven sacred cities in Hinduism and Jainisma, as well as being one of the oldest inhabited cities in the world. The Hindu religion considers the city to be a tirthas; a place where Hindu followers can access the gods and goddesses coming down to earth. Varanasi is known for its industrial and cultural importance with an abundance of art, music and culture. Having such strong cultural and historical roots, the city’s second largest industry is tourism,with the first being its production and trade in muslin and silk fabrics, ivory works, perfumes and sculpture. 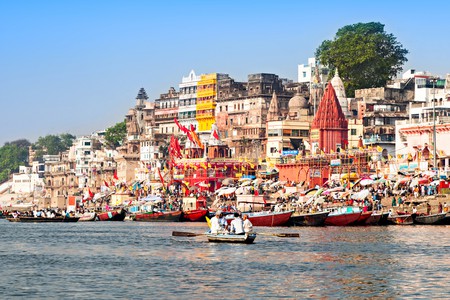 The Annapurna Bhavani Temple is dedicated to Annapurna, often referred to Shakti. This figure of powerful femininity is embodied in various ways, and often carries a cooking pot to represent her role as a provider, from which her name is derived – Anna meaning food and Purna meaning prosperity. Inside the temple is a gold image of Annapurna, which is only open for three days a year, situated near a silver shrine to Lord Shani. The presence of Annapurna in the Hindu religion is celebrated every October to November with a festival of food in her honor. 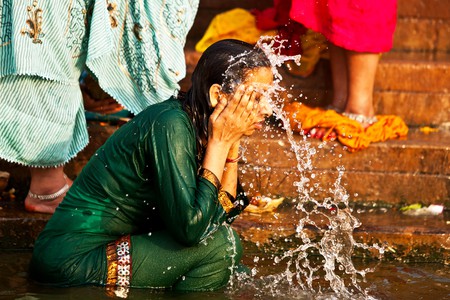 Hundreds of Ghats punctuate the bank of the River Gange in India and these stone steps which jut out of the side of the river bank play an important part in the Hindu religion. Descending down the stone steps, one will reach the water in order to partake in ritual baths, religious ceremonies, blessed offerings and the washing of buffaloes, clothes and bodies. The Ghats are situated in specific locations along the Ganges and are an integral part of river life. Important Ghats include Dashashwamedh Ghat, the Manikarnika Ghat, the Panchganga Ghat and the Harishchandra Ghat.The latter Ghat, situated in Varanasi, continues to attract thousands of people, who come to cremate bodies of loved ones after they die. Washing the bodies in the holy and sacred water of the River Gange, before cremation, is believed in the Hindu religion to remit sin. Ghats are best visited at dawn, when beautiful orange hues stretch out over the river bank. 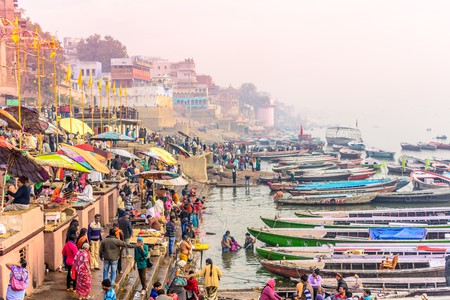 The industrial town of Allahabad is, unlike Varanasi, void of temples and monuments, yet does have a fort constructed by the emperor Akbar in 1583. The town sits at the point where the Yamuna and the Ganges rivers meet the Saraswati River. According to legend, a scuffle emerged between the Hindu Gods, which saw Vishnu spill four drops of nectar from the pot he was carrying. Where these four drops landed – Prayag, Haridwar, Nasik and Ujjain – four tirthas were made and this is celebrated by the religious festival Kumbh Mela. It is held once every three years and alternates between the four towns, making Allahabad the host every twelve years. 100 million religious pilgrims attend the festival, where they bathe in the rivers. 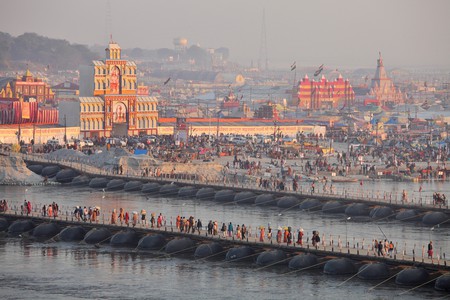 Bharat Kala Bhavan Museum is an Art And Archeological Museum within Banaras Hindu University. Its collection focuses on archeological materials, textiles and costumes which are derived from an era of historical and religious importance and cultural transition. The museum celebrates the beauty of these objects whilst archiving and preserving their Indian heritage. It is renowned, however, for its collection of Indian paintings and, in particular, a diverse collection of miniatures. 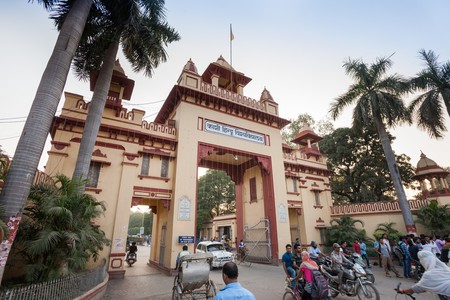 The River Ganges is a lifeline to the towns and cities surrounding it. As people bathe, wash, fish and partake in the mass of religious ceremonies along the river bank, the activity has hugely damaged the condition of the water. The drastically decreasing number of dolphins is due to hunters killing the animals for their meat and oils. This, added to the industrial, agricultural and human pollution within the river, is proving detrimental to marine life in general. These endangered dolphins have been named the National Aquatic Animal of India and are incredibly important to the river’s ecosystem. Dolphins are usually found alone or in smaller groups. Keep an eye out for the Ganges dolphin; an endangered species unique to this river and vital to its ecosystem. 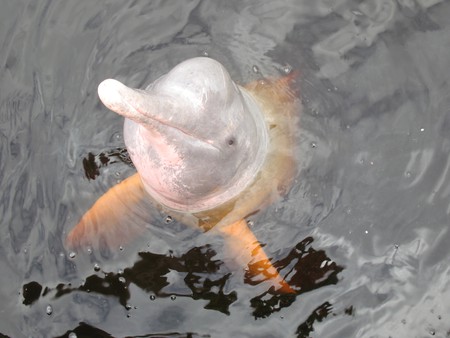 The Ganges River provides visitors with the opportunity to see the buzz of activity and religious rituals from an alternate perspective. Perched on the bank, cleaning and washing, exchanging, talking, offering to the poor for better karma, hundreds of people form a sea of color and movement. Boat tours are very popular with tourists and there is a huge selection of companies willing to show people round. This scenic and gentle ride is an authentic way of understanding the magnitude and importance of the river itself. There are also rafting experiences available along the Ganges, with Rishikesh being a popular spot with more aggressive waters and natural, unpopulated scenery. 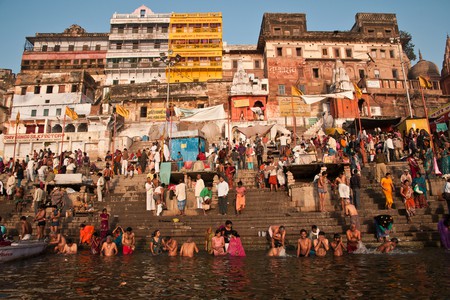 The town of Gangotri is one of the more isolated Hindu pilgrimage sites, located nearby the Bhagirathi gorge, the source of the River Ganges. In Gangotri there is a temple dedicated to the goddess Gange who was seduced down to earth by penance from King Bhagirath to revive the ashes of his people. 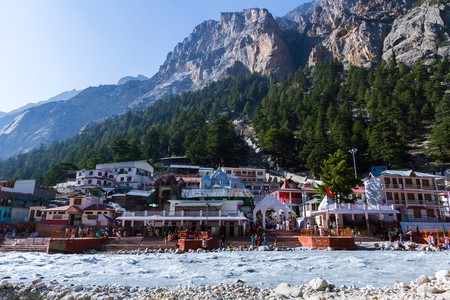 Kashi Vishwanath Temple is an important Hindu temple found in the sacred city of Varansai. As a renowned pilgrimage site, Varansai is a key destination to which Hindu people usually flock once in a lifetime. The temple is dedicated to Lord Shiva, who is a significant God of Hindu religion, and is striking due to its impressive gold spire. The temple’s history has seen it destroyed and rebuilt on numerous occasions. The present day structure was built by Queen Ahilyabai Holkar of Indore in 1785. 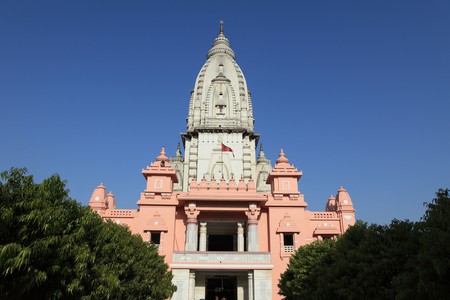