Agni Keli: The Indian Fire Festival That Will Warm Your Senses

In Spain, giant effigies are set alight. In China, molten iron is sprayed on city walls. And in Scotland, a replica Viking ship is lit by a thousand torches. All over the world – and despite the obvious dangers – fire means festivities. But in South India, there’s a fire festival that might just be the wildest of the lot.

Agni Keli is an eight-day-long event held every April in Mangalore, in Karnataka. And it features an all-out fire brawl, in which participants fling flaming branches straight at each other. 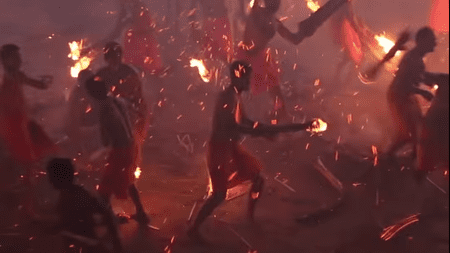 Agni Keli is a fire-throwing festival in honour of Durga, the Hindu goddess of war | © Culture Trip

The men are devotees of Durga, the Hindu goddess of war. After ritually bathing in the river, they gather in two groups about 20m (65ft) apart, clad only in orange lungi (sarongs) – if they wore more clothing there’d be more danger of it catching fire. Each group picks up burning palm branches which they then fling at their opponents, aiming to score direct hits on as many people as possible.

It looks like a genuine battle – the branches flying through the night sky, sparks falling around the participants, who pick up more branches and throw again, the neat line of men breaking up into chaos. But there are festival rules. The contest lasts around 15 minutes in total, and white-clad referees are on hand to treat injuries with holy water and stop any individuals being too seriously targeted.

Durga is the goddess of war, and is often pictured riding a lion or tiger, bearing weapons in her many arms as she fights demons. Followers believe that Durga is appeased by wild and adventurous rituals such as the festival of Agni Keli – she’s also honoured at Durga Puja festivities, which take place across South Asia in September and October.

Agni Keli runs over eight days every April. The fire-throwing itself takes place by the Kateel Durga Parameswari Temple, just outside Mangalore. Other events at the festival include the parading of the jewel-decked goddess through the streets. Mangalore, Karnataka’s main port city, is around eight hours drive from Bengaluru (Bangalore).