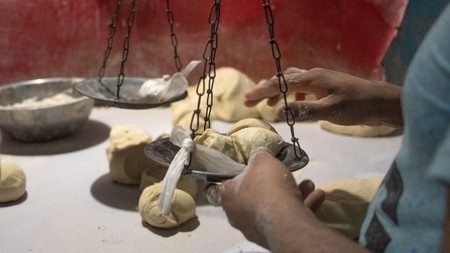 The United Nations High Commissioner for Refugees says approximately 14,000 Afghans are living in New Delhi; most of them are refugees. Here’s how Afghan food has made its mark in the Indian capital and where to try it. 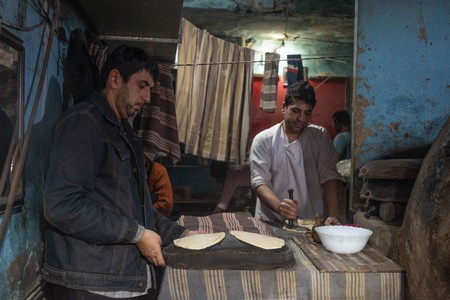 The bread is soft and chewy. The yellow soup bubbles away as the chapli kebabs (a thin and flat fried meat cutlet) and fried chicken sit ready to be tucked into a mouthwatering wrap bursting with flavour. The potato wedges are sizzling in a pan, the sound muffled by the hustle and bustle of cars and honking rickshaws. This street in the Indian capital could be any street in Kabul, with the kerbs lined with food stalls overflowing with different types of long and round Afghan bread (Afghan naan, roghani and lavasa), cakes and kebabs.

This street falls away from the main Lajpat Nagar market in New Delhi – a favourite haunt of bargain shoppers, students and tourists – and feels like Afghan redux, from grocery stores selling Afghan brands of food and items of daily use to restaurants to travel agents offering trip packages to Kabul.

“When we opened up here, we wanted to give refugees and medical tourists from Afghanistan a taste of home,” says Marwan Peerzada, the owner of Kabul Delhi. This restaurant opened its doors in Lajpat Nagar in 2009 and now has another outlet in the same area. Atik, co-owner of the restaurant and Peerzada’s uncle, adds, “When we opened, there were only one or two restaurants here. Now, there are at least eight to nine.”

The inside of the restaurant has a warmth like most Afghan restaurants in the area. The dining hall of Kabul Delhi is long with comfortable four-seaters on either side. A few people are quietly tucking into their steaming plates of kabuli pulao, a fragrant rice dish flavoured with tender pieces of mutton, lightly grated carrots and plump raisins that burst in the mouth with unexpected sweetness. “The pulao is very popular on our menu,” Peerzada says. “Afghan food is light and wholesome, and to us, a taste of the dusty streets of home.”

Afghan food is, in essence, very similar to Mughlai food, although the spices and flavours are mild and more balanced. Afghan bread, similarly, is heartier and chewier than the naan available in Delhi; it’s a mix between a flatbread and the traditional yeasty bread of the West – perfect for mopping up the meaty gravies that are Afghan cuisine staples. This bread also pairs perfectly with the thick sauces often found in Indian cuisine. 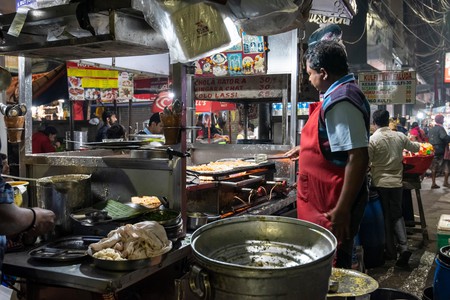 “Afghan naan bread is no different than the naan bread here – the only difference is that we use yeast,” says Jamshed, a 20-year-old who owns one of the numerous roadside stalls on this street that sells Afghan bread and the immensely popular Afghan burger. Unlike any other burger, this is a giant tower of fried chicken or chapli kebabs, thick-cut potato fries, salad and a spicy and tangy salsa-like tomato chutney, wrapped in a sliver of naan bread.

“The Afghan burger is a huge draw here. It is a favourite with young people and students. Although older people avoid it, saying it’s too high in calories,” he says, laughing. “But look at me. I eat it every day. Am I fat?” he jokes, pointing at his lean frame and drawing laughs from a few students waiting for their burgers.

According to the United Nations High Commissioner for Refugees, around 14,000 Afghans have been living in Delhi since the late 1990s. While most of them are refugees, many of them are also medical tourists who come to the Indian capital seeking medical help. A small community has grown up around the refuge seekers and temporary travellers to the Indian capital, especially in Lajpat Nagar.

There was a time when Afghan bakeries were found in the corners of this winding street. However, they are not allowed to function in the congested open markets anymore – possibly owing to the huge clay ovens that are used to make the bread. The bakeries have now shifted inside the narrow lanes. Once the bread is ready, the naanwais (bakers) bring it to the roadside stalls. Along with restaurants, the number of Afghan bakeries has risen over the years – from one in 1997 to five today. However, they are now out of sight in alleyways, as opposed to on street corners.

As Atik says, in a typical Afghan household, bread is a staple, mostly bought from the naanwais in the lanes. The naanwais, who are usually men, knead the dough and make fresh bread throughout the day. The bread on this Indian street costs 20 Indian rupees (£0.21) each.

“This bread is popular not just with Afghans living in India but also tourists and Indians. You can dip it in any gravy and enjoy it,” says Baba, a roadside bread seller, as he wraps up a mound of bread in an old newspaper for an Indian customer.

This thick, chewy bread is also great for dipping in Afghan soup – a bubbling pot of yellow gravy, thickened with arrowroot powder and teeming with shredded chicken and chickpeas (also known as kabuli chana in India). A cup of soup will cost you 50 rupees (£0.53). So, for 70 rupees (£0.75), you can have a filling, nutritious and tasty meal in India’s Little Kabul. 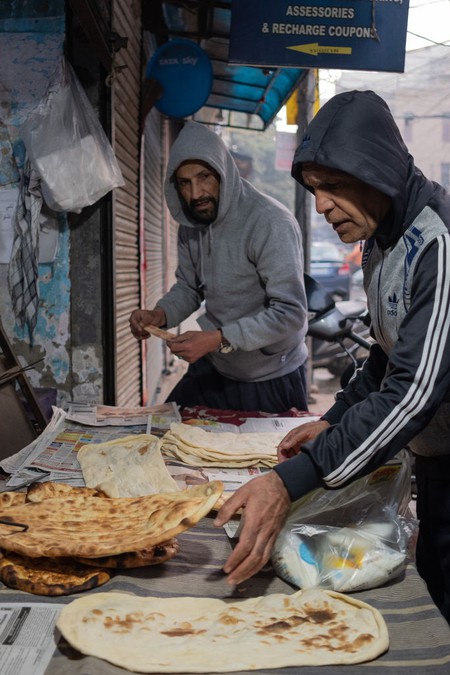 Here are a few restaurants in Delhi where you can savour Afghan food:

This award-winning, upscale restaurant sits inside one of India’s most popular shopping malls (Ambience Mall, Gurgaon) and serves delicious Afghan food for the well-heeled.

Kabul Delhi is the oldest and most well-known Afghan restaurant in Delhi. It serves freshly cooked biryani (a rice dish), uzbeki pulao and borani banjan (an eggplant dish) in its two outlets. A meal for two typically costs 550 rupees (£5.90).

This restaurant has seven outlets across Delhi and is famous for its lucknowi korma (meatballs), Afghan kebabs and rolls, and biryani. A meal for two costs about 550 rupees (£5.90).