Aajibaichi Shala: A School for Grandmothers in India 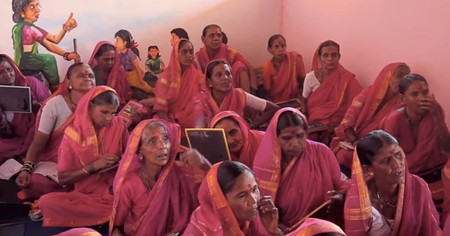 Age is no barrier when it comes to education and this has been proven thanks to Aajibaichi Shala, a school for grandmothers in India. Women aged 60 to 90 are learning to read and write at this revolutionary school. Keep reading to learn all about it.

How did Aajibaichi Shala come about?

Located in the remote Phangane village of the Thane district in Maharashtra, Aajibaichi Shala is the first and only school for non-literate grannies in India. The school’s primary goal is to educate elderly women who never got an opportunity to study because of antiquated stereotypes towards women.

Started in 2016 on International Women’s Day (March 8), the brains behind this novel initiative are Yogendra Bangar (an activist and local zila parishad teacher) and the Motiram Dalal Charitable Trust. In an interview with Firstpost, Bangar states, ‘Knowledge has great importance in life. It is very important to educate these elderly people who never got an opportunity to go to school. We started this school to bring happiness to their lives and make the village 100 percent literate’. 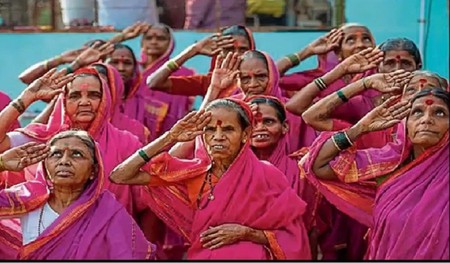 A day in the life of an elderly student

Set up in two living rooms in a local farmer’s house, the school remains open for only two hours a day, from 2 pm until 4 pm, and at present, there are 29 pupils. In the morning, the grannies (called aajis in Marathi) do their everyday chores and as the clock strikes 1:30 pm, they start prepping for school.

Donning their uniforms, pink saris, along with their school bags on their shoulders, they leave to go to school, with full enthusiasm. The school day starts with an assembly, which lasts for about 10 minutes and includes praying to the Goddess of knowledge, Sharada Vandana. After the assembly and roll call, the actual class starts, where they learn nursery rhymes, math tables, the alphabet and painting. Just like any other school, homework and unit tests are a part of the curriculum as well. In addition to that, they also indulge in gardening. The school has a garden space, where every student has to plant a sapling and take care of the plant. Each plant has a number and the name of the student who will take care of it.

Some of the grannies suffer from hearing problems, while others have weak eyesight, but this hasn’t deterred them from following their dream to study. Their undying wish is to be able to sign their own names when banking and during other transactions and they are working hard to fulfil this wish. One of the students, named Kantabai says, ‘When we go to the bank, we feel ashamed about giving our thumb impression. People laugh at us for not being able to sign our name. I feel that I should at least be able to sign my name. This is why I decided to go to school.’

Ramabai Ganpat Chandelle, an octogenarian student, also tells FirstPost, ‘I am like a ripe fruit that might fall off the branch anytime. I couldn’t go to school as a child and remained illiterate all my life. But I don’t want to die illiterate. Now, I am happy that I would be able to carry a few words with me to the other world’. Another student, Sitabai Deshmukh, who is the oldest of them all, says, ‘Never in my long life had I thought I would get a chance to go to a school. When I was young, my family was poor and girls didn’t have the chance to go to school. I have had a new life for the last year.’

These women have shown an unfathomable level of determination and courage by stepping out of the house and learning to read and write at an age when others prefer to take it easy and rest. They are, in fact, leading an education revolution in their village and in the country at large. 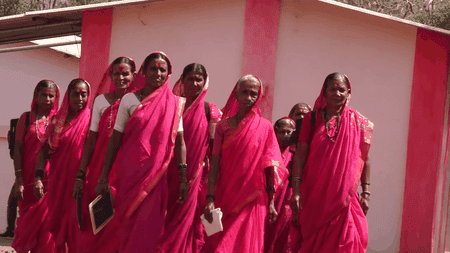 The village has suffered many problems, such as a water crisis, poor sanitation, no healthcare facilities and with public transportation. In this atmosphere, Aajibaichi Shala has brought a new lease of hope for the village folks. Education among these women has helped in raising awareness about hygiene, sanitation and healthcare, and today, the village is free of open defecation.