A Vegan’s Guide to the Best Street Food in Mumbai 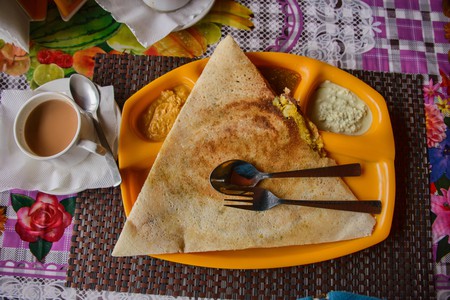 Mumbai’s street food is mostly prepared without meat or dairy. From roadside chaat (a collective term used for savoury snacks such as puffed-rice bhel) options to the energising ganne ka ras, here’s the best vegan street food in Mumbai. 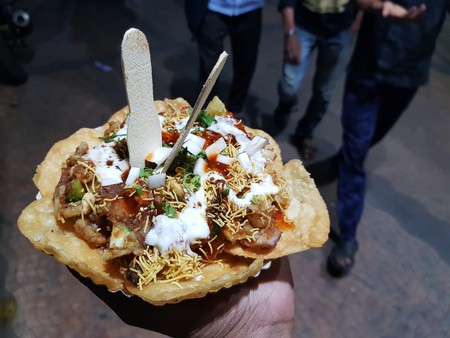 With seemingly endless khau gullys (lanes with food stalls), countless griddles frying up the best the city has to offer and crowds of people lining up each day to get their fill, Mumbai’s street-food scene is just as overwhelming as it is exciting. If you’re vegan and are trying to navigate the city for street-food staples – count on Mumbai’s student residents. They share with Culture Trip their favourite vegan street food and the places to find it. 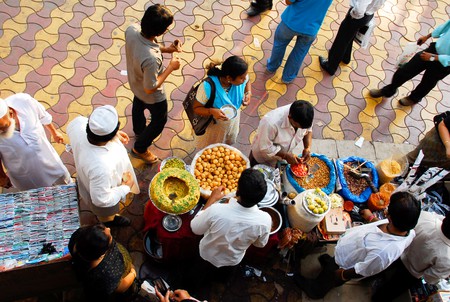 Although ganne ka ras (sugarcane juice) is abundantly available, Thane resident Arundhati Ail’s favourite stall to get a glass is right outside a UNESCO World Heritage site, the Chhatrapati Shivaji Maharaj Terminus railway station (CSMT) in South Mumbai. “Sugarcane juice is such an underrated drink, and it’s super refreshing, especially with Mumbai humidity. It’s quick, cheap – about 10 or 15 Indian rupees (£0.11-0.15) for a full glass – and so tasty.” For an instant energy boost, try Ail’s recommendation outside the CSMT station, or head to Swati Snacks in Tardeo or Gupta Sugarcane Juice Centre opposite the Gateway of India in Colaba. These spots have been in business for several years and follow prescribed hygiene standards. 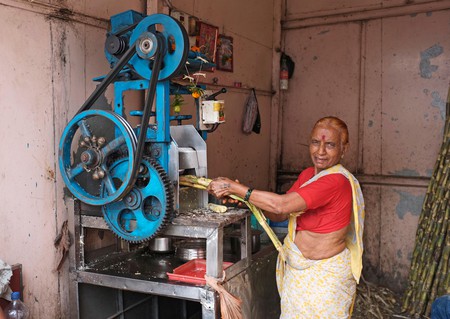 Pro-tip: Ensure that your ganne ka ras is freshly squeezed before your eyes. Ask for a sprinkling of chaat masala, a smoky mix of salt and cumin powder, to offset the sweetness of the juice.

Another thirst-quenching street delight is the gola – popsicles made with freshly shaved ice and doused in a syrup of your choice. You can opt for a bright orange-flavoured lolly or a goblin green, but the most enticing flavour is kala khatta – dark purple, sweet, sinful. Vaishnavi Behl gives an off-beat recommendation for the best golas in town, at a spot she frequents with her grandmother. “After our walk around Five Gardens, Wadala, we stop by Chotu Gola Wala and order one kala khatta gola with extra salt for me and a nimbu (lemon) gola for my grandmum. I’ve spent my whole childhood and college life trying all kinds of street food in Mumbai, but nothing has ever come close to these golas.” 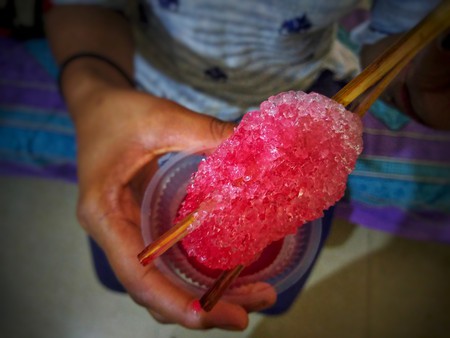 Pro-tip: Most gola sellers have mobile carts that they wheel around from neighbourhood to neighbourhood. The best way to identify a gola stall is to look for a collection of colourful syrup bottles or a large green ice-shaving machine.

The anatomy of the panipuri is simple – a deep-fried hallow dough ball filled with various toppings such as boiled chickpeas, boondi (fried chickpea flour) and boiled potatoes, all drowned in sweet tamarind-infused water and spicy chutney. Bandra resident Karina Acharya recommends that you get your fill of the divine snack at Punjab Sweet House at Pali Hill in Bandra, a frequent haunt for her and her father. Another great spot in Bandra is Elco Market, a multi-counter chaat haven. 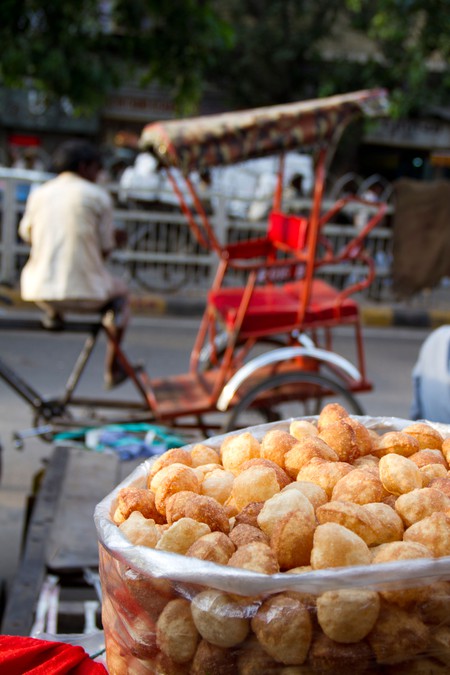 Pro-tip: Ask for a sukha puri – the puri and the filling minus the chutneys and sauces make for the perfect end to a panipuri session.

Chaat comprises both sweet and savoury dishes, but the Bombay bhel is a good place to start. Puffed rice forms the base for this dish, and vendors build up the flavour with raw onions, tomatoes, boiled potatoes, roasted chickpeas and peanuts. Sukha (dry) bhel comes with a pinch of dried spices (or a fistful, if you’re one for the heat) and fresh coriander, while its geela (wet) counterpart features cilantro-mint chutney and tamarind paste. This dish, traditionally served in paper cones or on steel plates, makes for a light yet filling snack. Harshil Vora highly recommends heading to Gupta Chaat Centre in Matunga, saying, “Nothing satisfies the taste buds like the mix of flavours and tastes in chaat.” 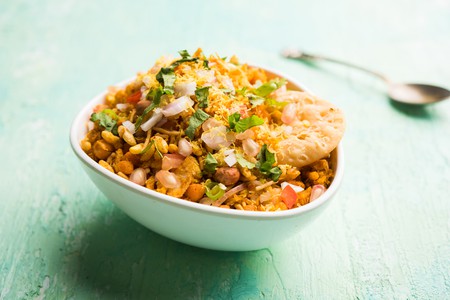 Pro-tip: Ask for slices of raw mango in your bhel for a sweet-and-sour twist.

If you’re up and about early in the morning, you’ll see suited-up business people and daily-wage labourers alike grabbing their share of samosas or batata vadas for breakfast on the go. A quintessential Maharashtrian snack, batata vada is a medley of mashed potatoes, green chillies, coriander, curry leaves, onions and garlic dipped in a chickpea flour batter and fried to crispy golden perfection. The snack pairs well with pav or fluffy white bread but can be eaten by itself just as it is served in Maharashtrian households – vegan and dairy-free. They’re best when they’re just off the flame and have all the accompanying condiments, as Arundhati Ali recommends. “Batata vada and samosa served with garlic chutney and crisp green chillies – fresh off the kadai (large cooking vessel) – I’ve eaten these since I was a kid, and it was a common evening snack that my dad would pack and bring home.” Ali’s favourite is Santosh Vada Pav Dosa Corner in Thane. 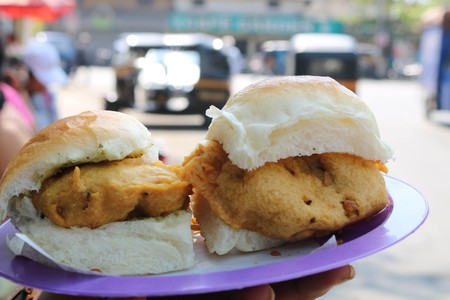 A pillowy pav stuffed with golden-fried spicy batata vada, covered with a lick of tamarind and coriander chutneys, is a Bombay street-food staple | © food_and_more / Shutterstock

Pro-tip: Batata vada tastes just as great without pav. Leave the bread out to keep it vegan.

Another popular street-food speciality in Mumbai is the samosa, a crunchy deep-fried pyramidal snack stuffed with a spicy potato filling that also features green peas, fennel seeds, pepper and amchur (dry mango powder). Eat them as they are or with some meetha chutney made from dates and tamarind at Pankaj Farsan & Wafer Mart in Vile Parle or Tewari Bros in Juhu. Ghatkopar-resident Umang Sampat prefers to make a meal out of it with samosa chaat, a combination of samosa and chhole (chickpea curry). In his opinion, his mother makes it the best, but Guru Kripa in Sion is a close second. 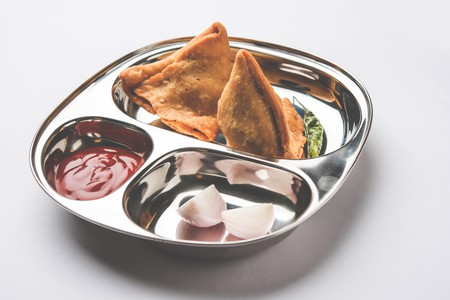 Pro-tip: Guru Kripa has a kitchen facility dedicated exclusively to samosas right opposite the main restaurant. You can watch the cooking process and then buy your samosas hot and fresh out of the oil.

Paan has been a part of Indian food culture for centuries, as it’s believed to have digestive qualities, making it a much-loved end to a meal. Originally from Uttar Pradesh in North India, traditional paan is laced with tobacco and supari (woody slices of betel nut). You can keep yours tobacco-free by opting for the sweet meetha paan. Most paan sellers have small kiosks set up along the roadside. Hit up Mucchad Paanwala in Breach Candy, a family-run shop that has an almost cultic status because of its moustache-clad owners. If you’re seeking adventure, try Vaishnavi Behl’s recommendation, Brijwasi Paan Bhandar in Juhu. “I was a strict non-paan eater – only accompanying friends on weekly paan runs – until I decided to give the ice paan a shot. I was instantly sold.” 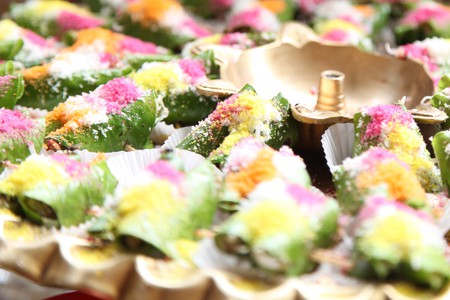 Sampat swears by the Ghatkopar khau gully. “I’ve spent all my life in Ghatkopar. The khau gully here has been my go-to place for street food since before social media and numerous food bloggers began talking about it. Whatever it is that I’m craving, the Ghatkopar khau gully offers in some shape or form. From fusion dosas to chaat items, you’re in for a treat.” He recommends you try the inherently vegan dosa, a sort of crepe or pancake made with rice flour and served with coconut chutney and sambhar. For a filling meal, get a masala dosa, which comes stuffed with curried potato, or a Mysore sada lined with a smoky blend of spices. 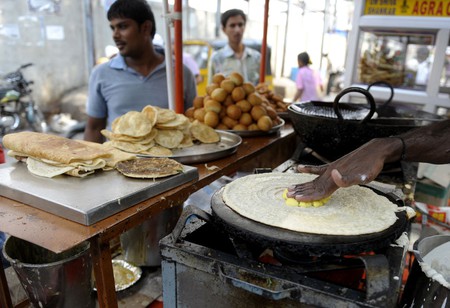 Pro-tip: To keep it vegan, ask for your dosa to be cooked in oil instead of butter and avoid the cheese variants. All else is up for grabs.