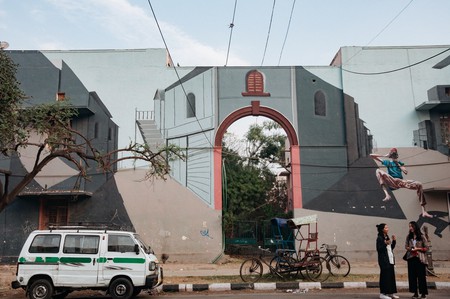 In the heart of Delhi, and encircled by an otherwise lacklustre neighbourhood, lies India’s first open-air public art district. The mural spectacle in Lodhi Colony has made art accessible to everyone.

The Lodhi Art District is a major project undertaken by St+art India, a not-for-profit organisation established in 2014 by young like-minded artists. In a two-month long street art festival in 2016, more than 20 artists from all over India and across the world displayed their art on the drab walls of government residential buildings in the neighbourhood. The area is now so popular that it has started to host famous guests, including the First Lady of France Brigitte Macron. 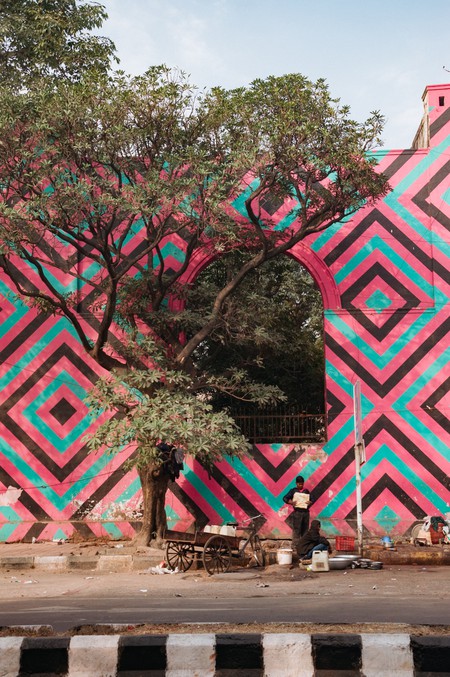 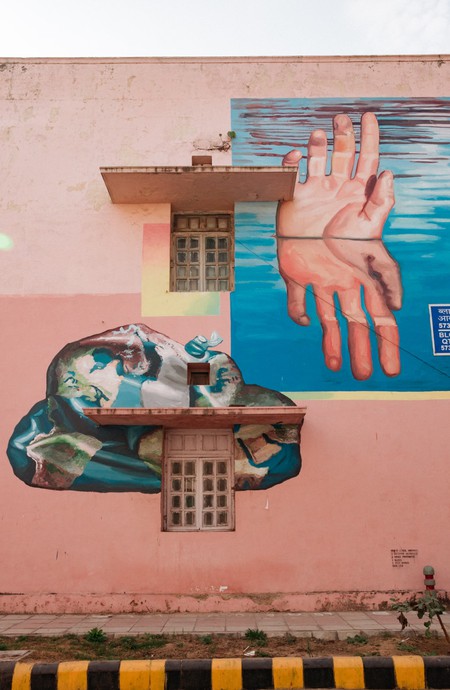 The organisation has been arranging various events to promote art projects in public spaces across the country, but it’s the first time that street art in India is being given a common platform for expression. Before this, visuals in communal spaces were mostly restricted to inelegant advertising, political propaganda and defacing graffiti. According to St+art India, the country’s art scene was only accessible to a privileged few until recently and now there’s urgency to change this scenario. 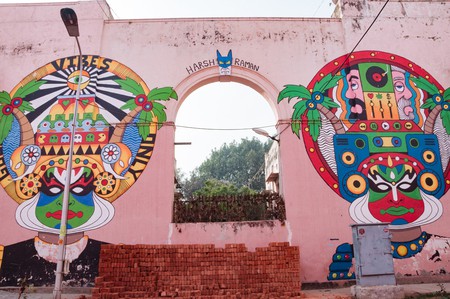 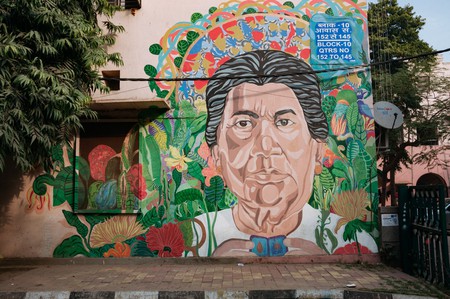 “Our intention is to activate new cultural spaces in the city that encourage people to step out and explore different neighbourhoods,” explains Akshat Nauriyal, one of the founders of St+art India. “With the Lodhi Art District, we wanted to create an open art gallery to put forward the idea of reimagining our public spaces as interactive areas rather than just inert ones.” 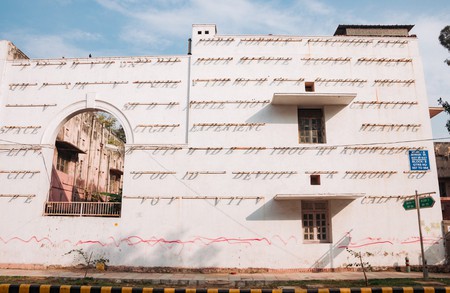 According to Nauriyal, just four or five years ago, locals were completely unaware of street art in the country; artists didn’t really have a strong network to tap into, and there wasn’t a unified community with similar goals. However, this has now begun to change. “A lot of young people are looking at street art as a viable profession with more opportunities. There are also discussions happening within the government at the policy level about public art and the need for art and culture in the smart cities of the future,” he says. 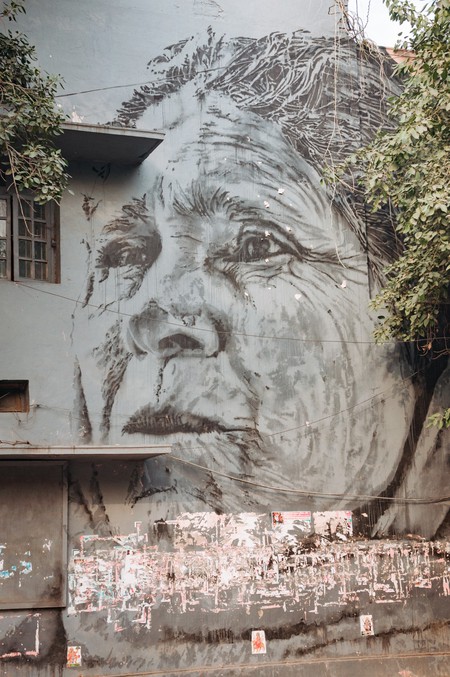 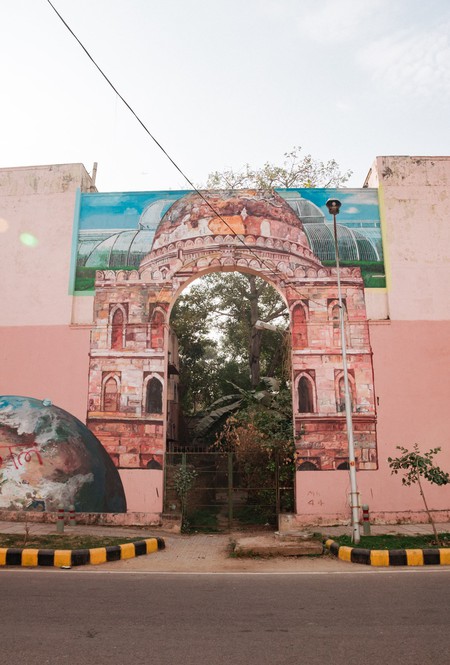 The artists behind the murals

French artist Chifumi created the vivid padma mudra, taking inspiration for the colours from the Indian national flag. The mural depicts a symbolic hand gesture that represents love, compassion and the purity of the lotus flower floating above the muddy waters of desire and attachment. “I chose the lotus to express the awakening of street art culture in India,” says Chifumi. 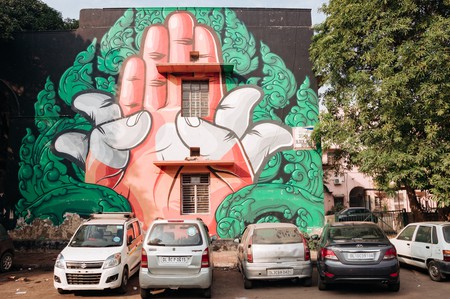 The Swiss duo Pablo Togni and Christian Rebecchi, also known as NEVERCREW, have created one of the most Instagrammed murals in the Lodhi Art District. The art depicts a lone astronaut sitting atop a giant multi-coloured meteor and is located in one of the oldest colonies in the city. “We wanted to create something that would recall this colonial history, as well as the interaction between cultures and people, and relate it to the current situation,” Togni and Rebecchi explain.

For them, the practice of power and conquest has led to the dilution of our past, present, and future. As a result, we find ourselves with no history, no memories and no reference points that allow us to understand his position in society today. 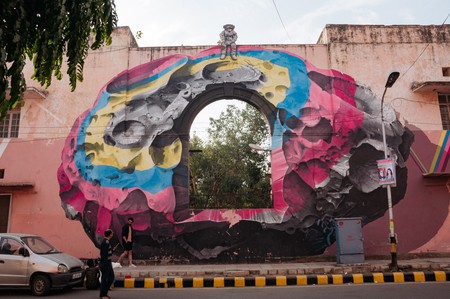 New York-based artist AIKO, who was born in Japan, has painted a stunning portrait of Rani Lakshmibai, one of the most influential female rulers in Indian history. She was an instrumental figure during the 1857 uprising against the British Raj. In AIKO’s painting, Rani Lakshmibai is seen in the midst of battle, carrying a child and a sword. 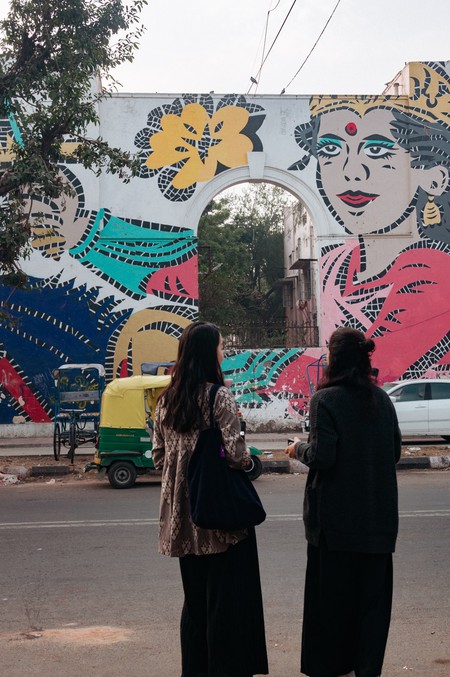 Another popular work in the neighbourhood was created by Dutch artist Niels Shoe Meulman. His art involves a fusion of calligraphy and graffiti called ‘calligraffiti’. Meulman has painted a poem on a wall of the Lodhi Art District using brooms.

And no words to read

No names in the streets 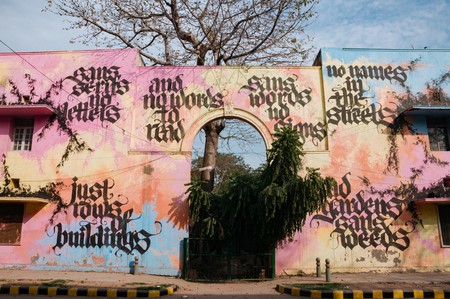 Amitabh Kumar, a local artist, has named his mural Dead Dahlias. His art alludes to the inception of Delhi as narrated in the Indian epic Mahabharata. According to the story, when the Pandava brothers, the protagonists of the epic, lost a game of dice to their cousins (and nemeses) the Kauravas, they were exiled to a land of ruins called Khandavaprastha.

“It is said that Lord Krishna accompanied the Pandavas [as they went into] exile and at night when the others slept, he transformed this wasteland into the land of the gods, or Indraprastha,” says Kumar.

The present-day Delhi is often believed to have had its roots in Indraprastha. “Its magic, therefore, is what made Delhi,” says the artist, adding that the beautiful spell that holds the city together is starting to wane. “Indraprastha is once again regressing to Khandavaprastha. The artwork is a plea to the citizens of Delhi to catch the pieces of this crumbling magic.” 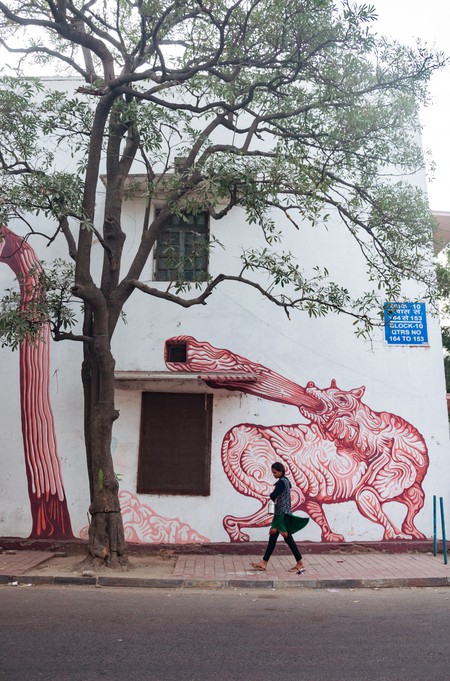