Literary Greats: The Writers Who Were Influenced by Mumbai 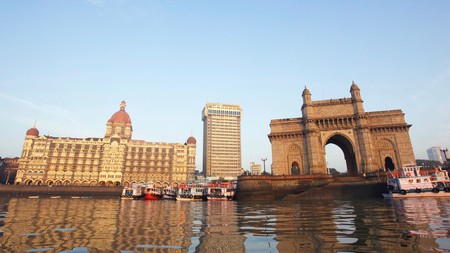 If you’re looking for inspiration, to walk in footprints made by literary greats and their contemporaries, look no further. Learn about the writers who were influenced by Mumbai, and discover where they stayed and what they wrote. 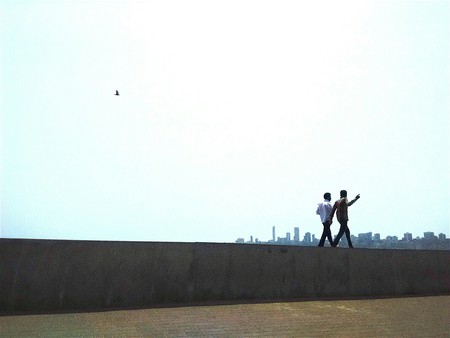 At first, Mumbai seems like an unlikely literary destination. Kolkata, or Calcutta as it was once called, is often dubbed India’s cultural capital. However, with its evolution from a fisherman’s village to a trade port during the British Raj and now the financial capital of India, Mumbai has seen a unique set of cultural and historical shifts to become the thriving metropolis that it is today. For this reason, perhaps, the city has seen many literary greats walk its streets over the years, defining their indefinable Bombay. 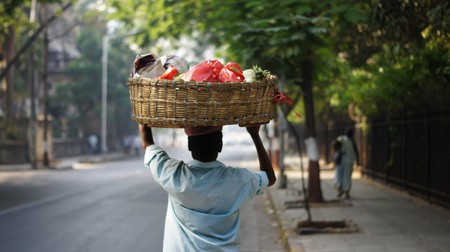 Leonard Cohen spent the better part of 1999 and 2000 in Mumbai after having first arrived in India in 1998. He stayed at the Hotel Kemps Corner, and his visit might have been a quiet one if it weren’t for a fan tracking him down and, later, befriending him. While in Mumbai, Cohen spent his time absorbing the city and attending lectures on Hindu philosophy. And when he was back in his hotel room, he spent the remainder of the time reading, meditating, sketching and writing.

The Indian-Jewish community, though small, was one thing about Mumbai that captivated Cohen. Jewish himself, Cohen once joked to an Indian friend: “I am settling down here. Why don’t you find me a good Jewish bride?” He frequented the Knesset Eliyahoo, an Orthodox Jewish synagogue built in 1884, and visited the Jehangir Art Gallery, which had works by Indian-Jewish artists. In his Book of Longing (2006), Cohen would reference his time in Mumbai a handful of times, pondering that “Mumbai, like the Athens / of forty years ago / is a city to smoke in.” 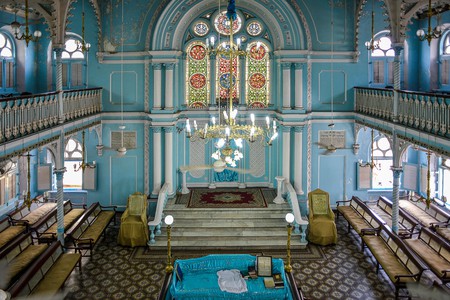 Bombay-born, Booker Prize-winning Salman Rushdie completed his primary education at the prestigious Cathedral and John Connon School before spending later years in both the United Kingdom and the United States. The writer says the city of Mumbai still has a top spot in his heart; therefore, it’s no wonder that the city of his birth features so heavily in his works of fiction, starting with Midnight’s Children in 1981. His novel The Moor’s Last Sigh (1995) features scenes from Chowpatty Beach, a city beach crowded with young couples and sugar-happy children. In the book, Rushdie wrote, “Once a year the gods came to Chowpatty Beach to bathe in the filthy sea,” in reference to the annual Ganpati festival, where idols of the Hindu elephant-headed god Ganesha make their way from a parade in the city to the sea. 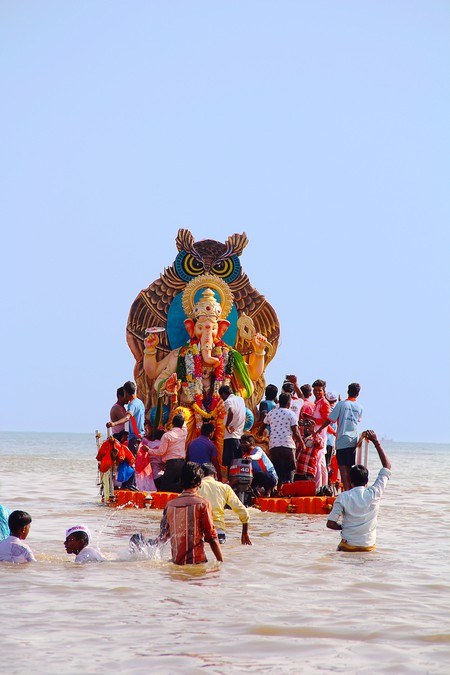 During the annual Ganpati festival, idols of the Hindu elephant-headed god Ganesha make their way from a parade in the city to the sea | © ephotocorp / Alamy Stock Photo

The most unlikely candidate on this list, Mark Twain came to Bombay in 1896. In Following the Equator: A Journey Around the World (1897), he described the city as “A bewitching place, a bewildering place, an enchanting place – the Arabian Nights come again!”

While in Bombay, Twain stayed at Watson’s Hotel (a hotel so “plush” that Queen Victoria reportedly commented on its “garishness”). Today, the once-flashy Watson’s Hotel is known as the Esplanade Mansion, a decrepit cast-iron structure and UNESCO-listed site that closed its doors in 2019 to undergo restoration.

If you find yourself in the area surrounding the Esplanade Mansion in Fort, hop over to the nearby David Sassoon Library for some quiet time. Alternatively, cross the road to the University of Mumbai Fort campus, which Twain would have undoubtedly passed on his many detours to the “great bazar” (presumably in Colaba), which he wrote about in Following the Equator (1897): “In the great bazar, the pack and jam of natives was marvellous, the sea of rich-coloured turbans and draperies an inspiring sight…” 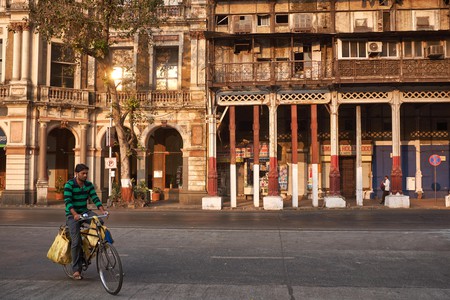 The voice of the Beat Generation came to Bombay twice. Thrice if you include his first call to the city – a dream in which he sailed into the port, past the Gateway of India. On Allen Ginsberg’s second trip to Bombay, Indian writer Pupul Jayakar put him up in her Malabar Hill house. He went on to write a handful of poems and scribbles about the city in his published Indian Journals (1970). Once news of his stay in the area got out, he held court at Indian-Jewish poet Nissim Ezekiel’s flat on Warden Road and debated everything from jazz to journalism with local intellectuals. Like Twain, Ginsberg also frequented the markets.

Ginsberg also stopped by several understated (to some, dingy) chequered-tablecloth-bearing cafés in Kala Ghoda and Fort with Ezekiel and friends, sharing conversation and food. He wrote in a letter to Gregory Corso, “Hardly been diarrhetic here even as much as Paris, and I’ve really eaten the worst. Maybe I’m immune, immunised by Peru, Mexico, Tangier. But ritzy restaurants are cheaper than Tangier even. Bombay has great food all over… Come here and have a ball in the greatest, weirdest nation of history.” If you’re looking for still-standing alternatives, the Military Café in Fort is the right amount of quaint, with the right mix of exhausted ad agency writers, lawyers and office workers. The beer is cold and plenty. 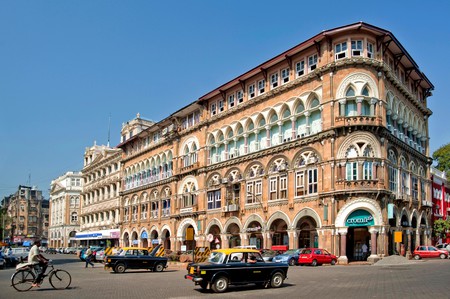 Rudyard Kipling, who was born in Bombay, wrote in his ode To the City of Bombay, “Mother of Cities to me / But I was born in her gate / Between the palms and the sea / Where the world-end steamers wait.”

Kipling’s father, Lockwood Kipling, was the first dean of the Sir JJ School of Art, home to the famed ‘Kipling Bungalow’ – a 137-year-old house that is currently undergoing restoration and set to open in 2020. In the meantime, you can take in Kipling’s Bombay at Crawford Market – a wet market for fruit, veg and poultry that also sells household items and knick-knackery – where he walked most mornings. Alternatively, just stroll through the streets, as he once did, noting in his Kipling way, the “gaily dressed Parsees wading out to worship the sunset.” 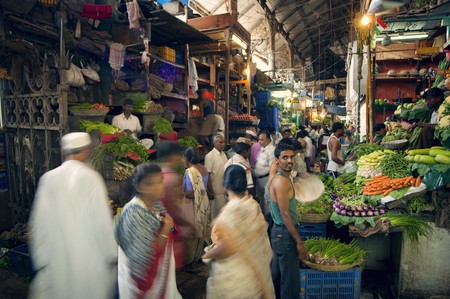 A walking tour of Mumbai’s literary scape, Walking with Words: Mumbai in Fact & Fiction takes you on a journey from the Gateway of India to Oval Maidan. The tour covers everyone from Kipling to Rushdie and includes meet-ups with a handful of writers around the city. The tour costs 750 Indian rupees (£8), begins at 8am and finishes up at around 10.30am. 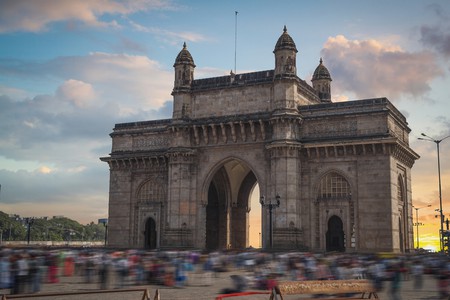