A Colourful LGBTQ Guide To Mumbai 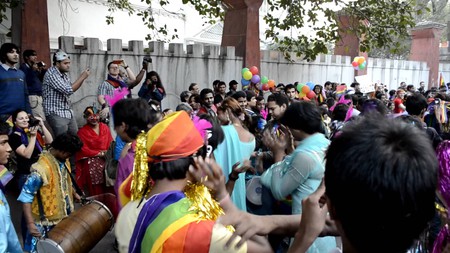 Mumbai’s LGBTQ crowd is dynamic and very active, yet mostly underground. With homosexuality still being criminalized in India, the city has a long way to go to becoming safer for its LGBTQ community. Yet Mumbai has a large LGBTQ crowd – organizing parties, film festivals and parades – with several openly gay figures, including Bollywood celebrities.

In 2009, the Delhi High Court repealed a colonial-era law which criminalized homosexual acts. This prompted an urgently needed yet slow surge in public institutions catering specifically to LGBTQ citizens throughout the country, including in Mumbai. Azaad Bazaar, the country’s first LGBT pride store opened in Bandra in 2009, whereas D’Kloset, the city’s first gay fashion store opened in Bandra in 2010. Yet, in a massive blow, the country’s Supreme Court of India re-criminalized homosexuality in 2013. And, even though support for the decriminalization of homosexuality has emerged from all over the country, including from Ministers from the current government in power, activists have been seeking to reverse the court’s decision since.

Regardless, Mumbai is a city committed to creating safe spaces for its LGBTQ community. The city still lacks officially acknowledged gay bars or clubs. However, quite a few bars and pubs across the city host special themed nights. Kitty Su in Andheri and Liquid Lounge in Versova are among the few which frequently feature themed nights specially catering to the LGBTQ community.

The city’s pride parade is among the country’s most vibrant and dynamic. Having featured movie screenings, flash mob, plays, meet-the-author programs, drag shows and street performances in the past, every year the Queer Azaadi Mumbai Pride March sees thousands of queer individuals take part and walk to demand and assert their human rights of equality in the eyes of law and society.

The KASHISH Mumbai International Queer Film Festival is among the city’s most important cultural events. Started in 2010 after the Delhi High Court ruling, KASHISH screens features, short films, documentaries, and experimental films that highlight gay, lesbian, bisexual and transgender characters and stories. With the active participation of Bollywood and a stellar turnout every year, KASHISH is one of the best celebrations of cinema in the city.

Gay Bombay, an LGBT group that was founded in 1998, has a large following and regularly hosts parties and meetups in the city. They even host film screenings, as well as picnics and treks out of the city. Salvation Star is another such group which hosts glorious, well-attended parties, music nights and other events for the city’s LGBT crowd.

Queer Ink, the country’s first LGBTQIH online bookstore, also has a small bookstore in Andheri. The store is housed within the office of the Humsafar Trust, India’s first LGBT community-based organization working in areas of health, advocacy, capacity building and research.