A Guide to McLeod Ganj, India's Own Mini Tibet 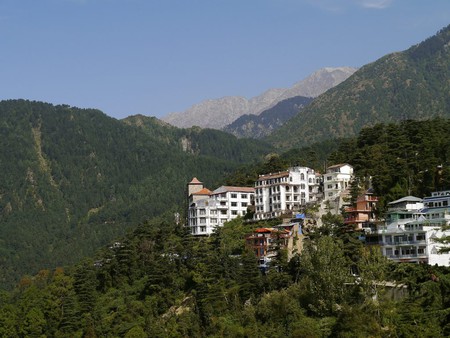 Nestled at an altitude of 5,577 feet (1,700 meters) in the Kangra district of the northern Indian state of Himachal Pradesh, McLeod Ganj is an enchanting hill station sitting in the lap of Dhauladhar range. Referred to as India’s Mini Tibet, the area is rife with Tibetan culture, quaint streets, charming monasteries, olde worlde cafes and an abundance of scenic natural beauty coupled with spiritual and tranquil vibes. Read our guide to make the most of your trip to India’s own Mini Tibet.

The picturesque landscape, spirituality and serenity of McLeod Ganj forms a beautiful collage that attracts tourists from across the world. It happens to be the seat of His Holiness the 14th Dalai Lama and serves as an administrative center of the Tibetan government in exile. With immense Tibetan Buddhist influence, it comes as no surprise that it’s also called ‘Little Lhasa’.

The Tsuglagkhang Complex is wrapped in spirituality and serenity. This complex is the holy site for the Buddhist pilgrims and offers an insight into Tibetan Buddhism. It encompasses Tsughlagkhang temple, the Namgyal Monastery, Tibetan Museum, a bookstore, a cafe and a library, along with many shrine rooms having statues of Lord Gautam Buddha, Guru Rinpoche (Padmasambhava) and Chenrezig (Avalokiteśvara). The complex opens at 5 am until 8 pm. 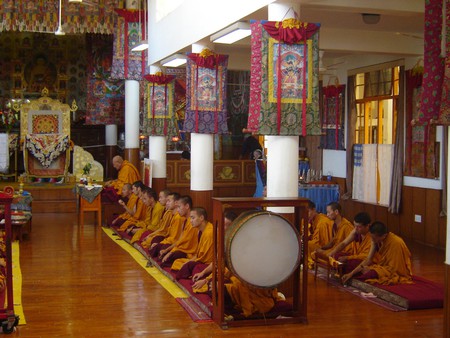 Overlooking the Dhauladhar peak, the Namgyal Monastery is said to be one of the biggest and magnificent Tibetan monasteries. Set up in the 16th century, this monastery is the seat of the 14th Dalai Lama, and houses an impressive Lord Buddha statue. The interior is ornamented with images, paintings and sculptures of Buddha and several Buddhism idols. Also, at the monastery, you can catch a glimpse of the maroon-robed monks performing their daily chores, including chanting mantras, meditation and even debates. The monastery exudes a serene and spiritual vibe that has lured tourists for many years. 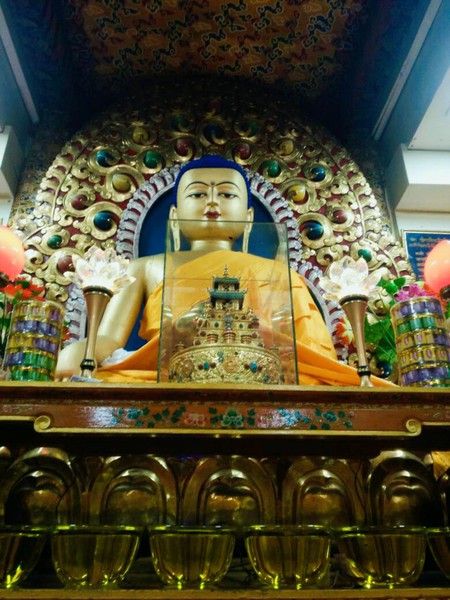 Insider tip: Visit in the morning so that you can take part in the meditation and the chanting along with the monks. 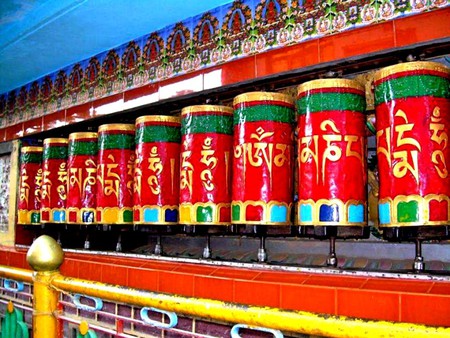 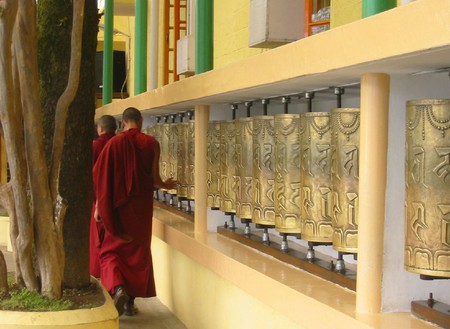 Within the complex lies the Tibetan Museum that offers a glimpse of Tibetan culture, customs and art through paintings, historical documents, handicrafts, pottery, manuscripts and Thangka images. In addition, there are photos, videos and interviews that depict the tales of Tibetan migration, and the struggles faced by them. The structure of the museum reflects the classic Tibetan architectural style that adds to its charm. Also, there is a souvenir shop from where you can buy handicrafts, artefacts and other keepsakes.

Perched at an elevation of 5,577 feet (1,700 meters) above sea level, and surrounded by freshwater springs and lush greenery, the Bhagsunath Temple is a Lord Shiva temple. The springs are said to be sacred and hold healing powers and medicinal properties.

From the temple, trek to the Bhagsu Falls, a 20-meters tall waterfall surrounded by glorious cliffs and rock formations. The trek to and from the falls is quite a task in itself. Soak in the extraordinary and picturesque vistas as you trek along the trail, and, once you witness the breathtakingly beautiful waterfall, you’ll realise it was all worth it. Take a dip in the bone-chillingly cold water, follow it by relaxing on the rocks and soaking up some rays and panoramic views from the top. 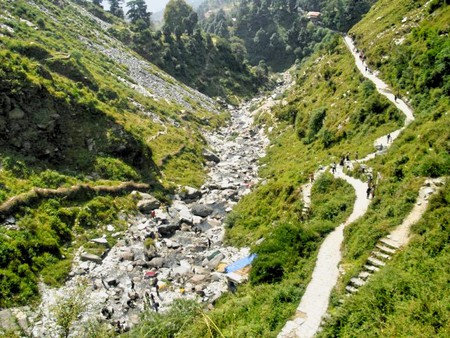 While descending, you just can’t afford to miss Shiva Cafe that serves authentic Tibetan cuisine, along with other munchies. The walls of the cafe are embellished with psychedelic artwork and Bob Marley posters. Trance music is played all day long and this will instantly traverse you into a hippie era. 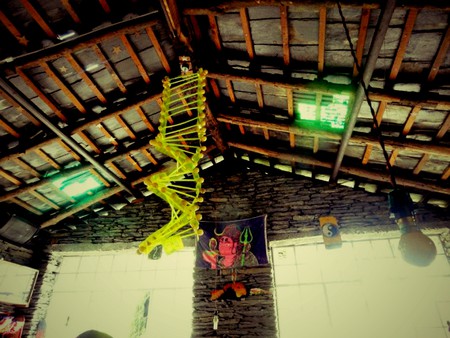 It’s a prayer-flags draped circuit around the Tsuglagkhang complex that has an array of prayer wheels, Buddhist shrines and collections of pictures of the Tibetans from 2009 who self-immolated to protest against the Chinese rule of Tibet. Visitors spin the wheels, while circumambulating the chortens (Buddhist shrines). 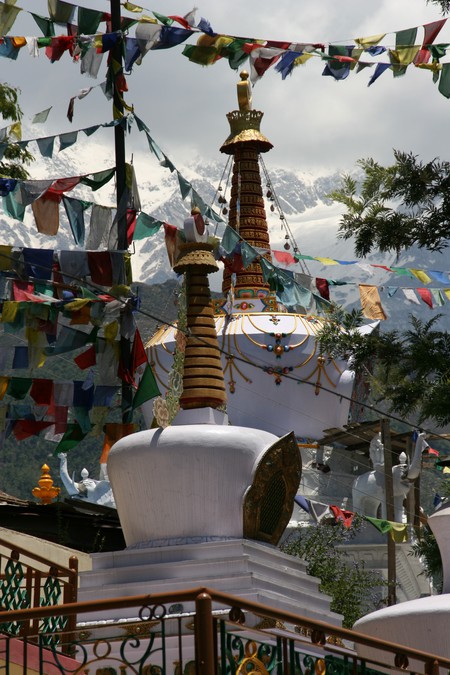 Another not-to-be-missed spot in McLeod Ganj is the Tibetan Institute of Performing Arts that beautifully showcases the Tibetan culture through music and folk dance. The must-attend is the local folk opera, Lhamo. The entry fee is INR 50 per head. Also, every year in mid-summer, a nine-day traditional Tibetan Opera festival is held, known as Shoton Festival.

McLeod Ganj has its fair share of shopping spots, like McLeod Ganj Central Square that is famous for Thangka tapestry paintings, wooden carvings and handicrafts. Make sure to check out the Nowrojee and Son General Store, a 157-year-old shop that harks back to the colonial past of India. Tibetan Mini Market is where you can shop for souvenirs and local knick-knacks; and Kotwali Bazaar is where you can shop for rugs, carpets and local sculptures. There’s plenty of room for hagglers! 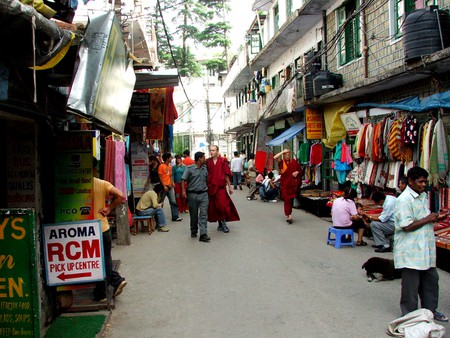 McLeod Ganj is home to numerous yoga, Ayurvedic and spa centers, where you can relax and find peace. Some of the centres are Himalayan Iyengar Yoga Center, Ayurvedic Rejuvenation Center and Tushita Meditation Center.

Set at a height of 5,823.4 feet (1,775 meters) above sea level amidst the verdant deodar forest, the Dal Lake is just three kilometres (1.86 miles) away from the McLeod Ganj and offers a perfect setting for boating and photography. Also, there is a Lord Shiva temple and tiny spring adjoining the lake. 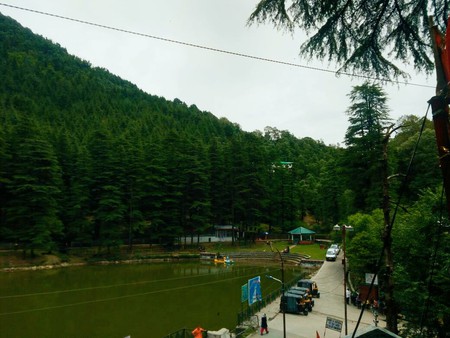 Adventure seekers can go trekking or camping to the nearby trails, for instance Triund, which is a moderately challenging trek with cold breezes, steep slopes and undulating terrain – via the verdant forest of oak trees and green rhododendron. 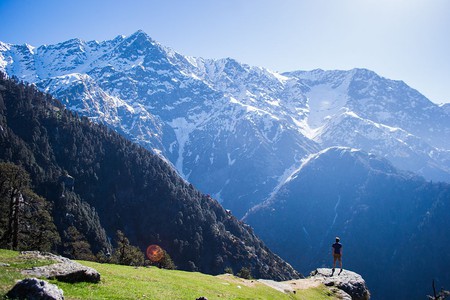 Where to eat and stay

McLeod Ganj is brimming with cafes and restaurants that serve everything, from Tibetan cuisine to Indian, Mediterranean, Italian, Chinese, French and Mexican. The must-try Tibetan dishes include thupka, momos and Tibetan butter tea. Some of the famous cafes are Jimmy’s Bakery, Tibet Kitchen, Indique restaurant and Illiterati Books and Coffee.

There are umpteen hotels, guest houses, hostels and homestay options in McLeod Ganj, from budget to high-end. 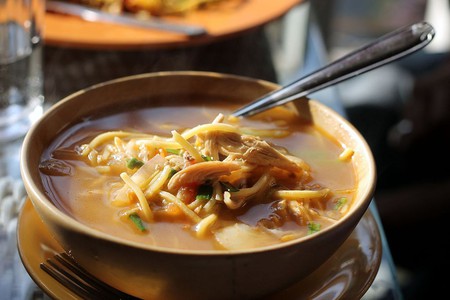 The best time to visit McLeod Ganj is March to June, when the weather is pleasant. Also, November to February is the perfect time to explore. Though it is cold during these months, the numerous sightseeing options and the spectacular view of the snow-capped mountains in the backdrop make up for it. 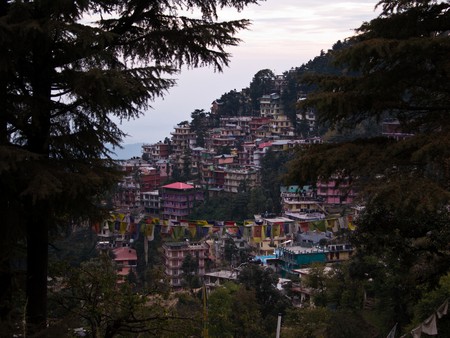 McLeod Ganj can be reached by road, air or rail. The nearest airport is the Kangra Airport, which is approximately 16.9 kilometers (10.5 miles) and the nearest railway station is the Pathankot Junction Railway Station, approx. 88.7 kilometers (55.11 miles) away from McLeod Ganj – take cab/taxi/bus for the rest of the way.

The other best way to get to McLeod Ganj is via Delhi. Fly to Delhi and take a cab or a volvo bus to McLeod Ganj, approx. 477 kilometers (296.3 miles) that can be covered within nine to 10 hours. Numerous volvo buses operate between Delhi and McLeod Ganj from different points in Delhi.