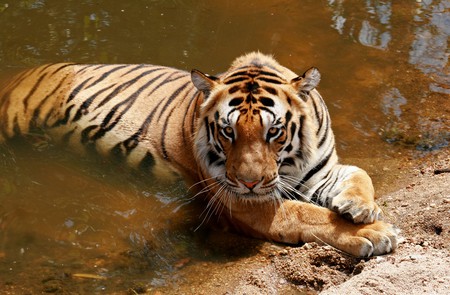 India is home to almost 3,000 tigers – 70 percent of the world’s population – and Madhya Pradesh is the best place in the country to see them in the wild. It has six tiger reserves – some of them popular tourist destinations, others little visited – and boasts an estimated 526 of the country’s big cats, more than any other state. An early morning or late-afternoon jeep safari – known locally as a “game drive” – through one of the reserves, keeping your eyes peeled for a telltale orange-and-black flash in the undergrowth, is one of the most memorable experiences in India. So here’s where to go tiger-spotting in Madhya Pradesh.

The biggest and best-known tiger reserve in Madhya Pradesh, Kanha is located in the southeast of the state and spans 940 square kilometres (363 square miles) of rolling grassland, dense forests, tranquil lakes and crystal-clear rivers. Its tiger population is around 100 and sightings are common, though they can never be guaranteed. Moreover, Kanha is incredibly rich in other wildlife, notably dholes (wild dogs), Indian Bison (the world’s largest cattle species) and the endangered barasingha (swamp deer), plus more than 300 species of birds.

Where to stay: Located in an idyllic spot just outside the park, the sustainably run Shergarh is one of the best places to stay in India, boasting luxurious tents (with attached bathrooms), thoughtful staff, sumptuous food and excellent guides. 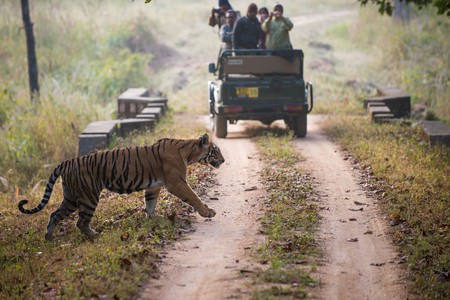 North of Kanha, Bandhavgarh has one of the highest tiger densities of any national park in India and sightings are very common. Around 70 tigers are thought to live in this 105-square-kilometre (40.5-square-mile) park, which encompasses forests, valleys, rugged hills and grassland. Among the other attractions are sloth bears, porcupines, several species of deer and even a few hard-to-spot leopards. There are also the remains of a hilltop fort that dates back to around 800 BC.

Where to stay: Tree House Hideaway is the most atmospheric lodge around Bandhavgarh and provides accommodation in five beautiful, well-equipped treehouses, which are surrounded by jungle teeming with wildlife. 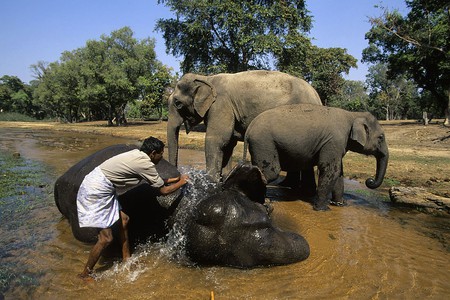 The forests in and around Pench helped to inspire Rudyard Kipling’s The Jungle Book. Despite its literary connections, this well-managed, forested park in the south of the state receives far fewer visitors than Kanha or Bandhavgarh. Rangers estimate that there are around 60 tigers in Pench, which spans 411 square kilometres (159 square miles) and straddles the border with Maharashtra.

Where to stay: Run by the state tourist authority, Kiplings Court is functional rather than stylish, but its dorm beds and private rooms are clean, comfortable and good value. 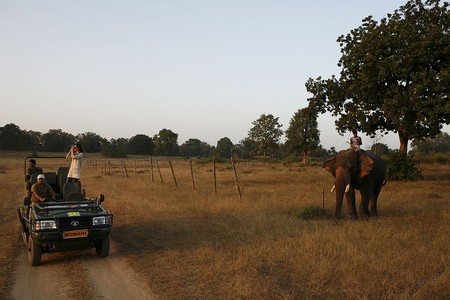 Located in northeast Madhya Pradesh, close to the famous temples of Khajuraho, Panna is one of the most accessible tiger reserves in the state. Following a successful reintroduction programme, there are now approximately 54 tigers in the 543-square-kilometre (210-square-mile) park, whose forests and grasslands are also great for birdwatching.

Where to stay: In a tranquil setting beside the Ken River, The Sarai at Toria has a collection of attractive, spacious cottages, and offers a range of tours and activities. 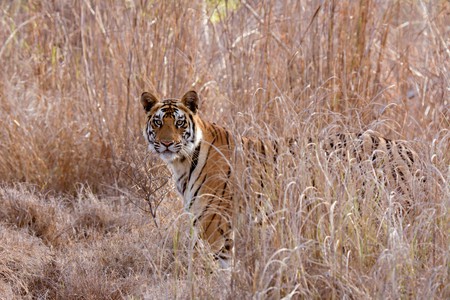 India is home to nearly 3,000 tigers – and Madhya Pradesh is the best place to see them | © Sushil Chikane / Alamy Stock Photo

On a high plateau near the hill station of Pachmarhi in southern Madhya Pradesh, Satpura spans 524 square kilometres (202 square miles). The sweeping Mahadeo Hills are a key landmark in the park, which is home to more than 40 tigers, though sightings are relatively rare. More commonly spotted are sloth bears, jackals, bison, deer and dholes.

Where to stay: Tucked away in a forest on the fringes of the park, Forsyth Lodge offers accommodation in both cottages and comfortable tents, plus a swimming pool.

Very few travellers make it to Sanjay-Dubri, over in the far east of Madhya Pradesh on the border with Chhattisgarh. Covered by dense sal and bamboo forests, this 831-square-kilometre (321-square-mile) park was once home to a famous white tiger named Mohan. Today, it has a handful of orange-and-black tigers, as well as more than 150 bird species and even the occasional wild elephant.

Where to stay: The pick of the limited accommodation options near Sanjay-Dubri, Parsili Lodge is run by the state tourist authority and has simple rooms overlooking the Banas River.

Tips to keep in mind

When to visit: Most people visit the parks in the warm October-November, the colder December-January, or the more comfortable February-March periods. Early April to June is stiflingly hot, but an excellent time for spotting tigers, as they are often drawn out into the open to waterholes. The parks are closed for the rest of the year due to the monsoon.

Advance bookings: Park entry tickets should be booked well in advance as visitor numbers are strictly limited. Most lodges can arrange this for you, although it is possible to do it independently via the Forest Department of Madhya Pradesh’s website.