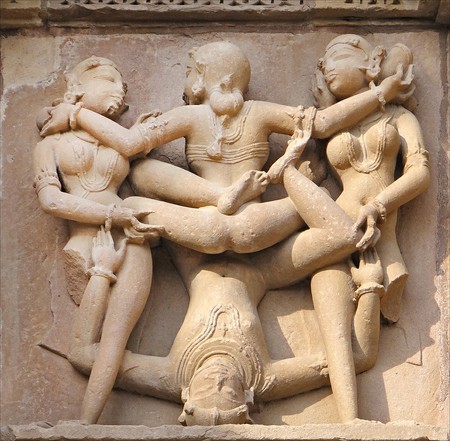 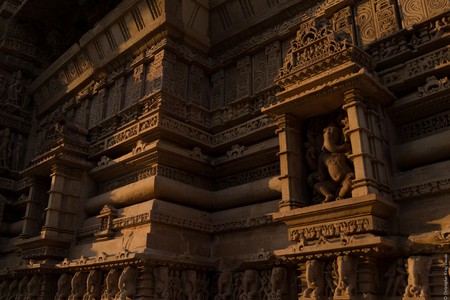 The Khajuraho Temples were built by the Chandella rulers between AD 900 and 1130, during the golden period of the Chandela dynasty. It is presumed that every Chandella ruler built at least one temple in his lifetime. One noteworthy ruler was Maharaja Rao Vidyadhara, who repelled the attacks of Mahmud of Ghazni. His love for sculptures is shown in these temples of Khajuraho and Kalinjar fort. Khajuraho, located right in the heart of Central India in the state of Madhya Pradesh, is believed to be the religious capital of Chandellas. The Chandella rulers had tried to distinguish politics from religious & cultural activities and established their political capital in Mahoba, making Khajuraho a religious and cultural capital. The first recorded mention of the Khajuraho temples is in the accounts of Al-Biruni in AD 1022 and in the works of the Arab traveller Ibn Battuta in AD 1335.

The Khajuraho temples, scattered over an area of about 9 square miles, depict the traditional lifestyle of women in the medieval age. Rediscovered almost nine centuries later, they give a poignant representation of life in the 11th century. A few of the temples are dedicated to the Jain pantheon and the rest to Hindu deities — to God’s Trio, Brahma, Vishnu and Shiva and various Devi forms, such as the Devi Jagadambi. The divine sculptures are a tribute to life itself, embodying everything that is sublime and spontaneous about it. Built using sandstone, with varying shades of buff, pink and pale yellow, each contains an entrance, a hall, a vestibule and a sanctum. The inside of the temple has rooms that are inter-connected and placed on an East/West line and constructed with spiral superstructures, adhere to a North Indian shikhara temple style and often to a Panchayatana plan.

It is considered that these temples are a celebration of womanhood as they depict sculptures of heavily ornamented broad-hipped and busty but well-proportionate women (apsaras) adorning the temple walls. The well contoured bodies of the nymphs grab attention and they can be seen engaging in activities like putting on make-up, washing their hair, playing games and knotting and unknotting their girdles. 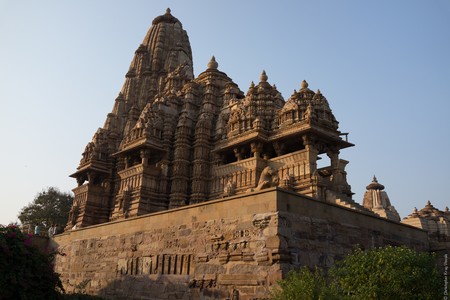 The western side of the site is the most popular area, which includes the Kandariya Mahadeva, the largest and one of the most important of the Khajuraho temples. Dedicated to Lord Shiva, the temple is studded with magnificent sculptures and one of the most ornately crafted temples at Khajuraho. The Chaunsath Jogini Temple, situated on the bank of the Shivsagar Lake, is believed to be the oldest temple in Khajuraho. This temple is different from the other temples at Khajuraho and depicts a style different from the Chandela style of architecture. 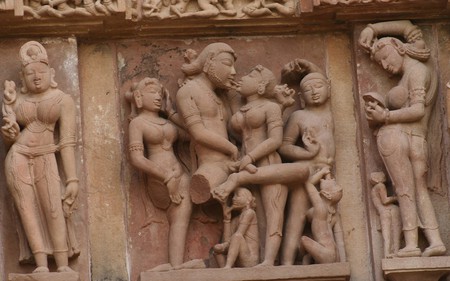 The Eastern temples are lesser known, but just as important as they reflect a very different side of Khajuraho. The Brahma Temple is actually dedicated to Lord Vishnu. Dated from 925 AD, this is one of the most prominent and beautiful structures in the eastern group. The temple wrongly came to be associated with Lord Brahma due to the presence of a four-faced Shivalinga. There is also a stark difference between this and the typical western group temples, devoid of the ornate carvings, sensuous sculptures and elaborate architectures. Instead, it is a simple structure and is made of granite along with a pyramidal spire made of sandstone. At the entrance, on either side, one can see the carvings of river goddesses Ganga and Yamuna. The temple is situated on the banks of the Khajursagar tank with the Khajuraho village as the backdrop. 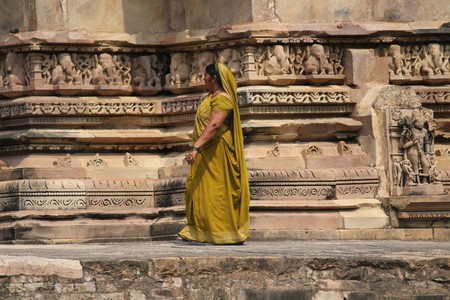