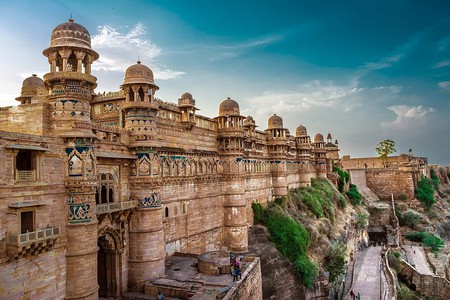 Gwalior Fort, situated on top of a hill, finds its place among the best fortresses of India. It is also considered to be one of the most impenetrable forts in the country. Known for its great architecture and rich past, Gwalior Fort is a must-visit attraction when visiting Central India. Read about the history of the fort here, and find out what makes it such a wonder.

The history of the Gwalior Fort

According to historians, there isn’t any concrete proof to indicate exactly when the fort was constructed. However, a local legend tells us that it was built in 3 CE by a local king called Suraj Sen. A saint named Gwalipa came wandering to the fort and met the king, who was suffering from leprosy. When Gwalipa offered him some water from a sacred pond (now called Suraj Kund and located within the fort complex), he immediately became healthy again. As a thankful gesture to the saint, the king named the fort and the town after him. The saint then gave the king the title of ‘Pal’ (protector) and told him that as long as he and his family continue to bear this title, the fort would remain in their possession. Following this, 83 successors of Suraj Sen controlled the fort. But the 84th king, Tej Karan, did not bear the title and lost the fort. 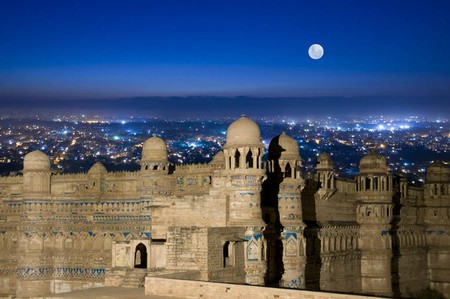 A panorama view of the Gwalior Fort at night | © Gyanendrasinghchauha / WikiCommons

Certain monuments and inscriptions inside the fort explain to visitors that it has been existent since the 6th century. A Huna emperor called Mihirakula used to rule the fort during that time. Later in the 9th century, Gurjara-Pratiharas captured the fort, governed, and also built the Teli Ka Mandir.

After being attacked and ruled by a couple of Muslim dynasties for three centuries, the Tomars captured the fort in 1398. Maan Singh was the last and the most distinguished Tomar ruler, and he constructed several monuments inside the fort complex. The beautiful turquoise blue-tiled Man Mandir Palace was built during his reign. And he also had a separate palace built for his wife Mrignayani; this structure is called the Gujari Mahal and is now a state archaeological museum. When Ibrahim Lodi attacked the fort in 1516, he defeated Maan Singh, who died, and the Tomars lost the fort. 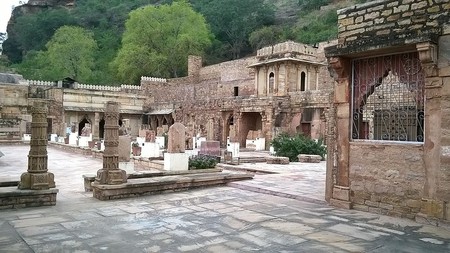 The Gwalior Fort then witnessed a brief period of rule by the Mughals, until the Marathas captured it and soon lost it to the East India Company. After this, there were many recurrent shifts between the rule of the Marathas and the Britishers. Finally, in 1844, the Maratha Scindia family of Gwalior, as the British government’s protectorate, occupied the fort.

During the rebellion of 1857, the fort saw great warfare – Rani Lakshmibai (the Queen of Jhansi) came fighting from Jhansi to Gwalior and sought shelter inside the fort. After fighting for days with the Britishers, she jumped from the fort on her horse and sacrificed her life. Until India gained independence in 1947, the Scindias continued ruling the city and constructed a number of monuments. 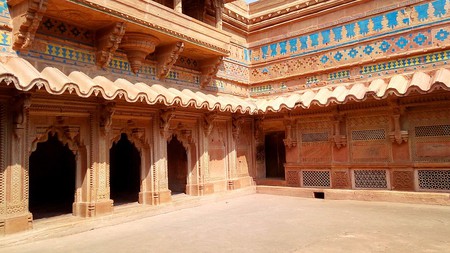 The structure of the Gwalior Fort

With well-maintained premises, the fort complex includes several temples, palaces and water tanks. The palaces here include the Man Mandir Palace, the Gujari Mahal, the Jahangir Mahal, the Shah Jahan Mahal and the Karan Mahal. The fort lies on an area of three square kilometres (1.1 square miles) and has two entrance gates: the main entrance being the Elephant Gate (Hathi Pul) on the north-east side with a long ramp and the other called the Badalgarh Gate on the south-west side. Man Mandir Palace sits on the north-east side. 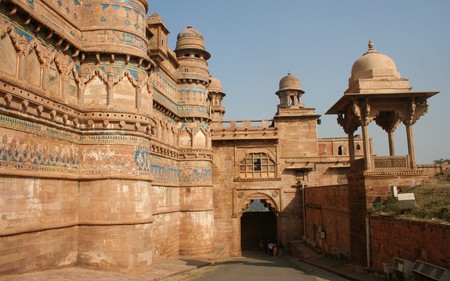 The main monuments inside the Gwalior Fort complex

Jain temples form unique monuments inside the fort, with the Siddhachal Caves and Gopachal rock-cut Jain monuments being the two areas, complete with thousands of Jain Tirthankar idols defaced during the Mughal invasion. Teli Ka Mandir and Sahastrabahu (Sas-Bahu) Ka Mandir are the two architecturally rich Hindu temples here. Gurudwara Data Bandi Chhor is another holy place built inside the fort’s complex, and it was where Sikh Guru Hargobind Sahib was kept as a captive by Mughal Emperor Jahangir. Man Mandir Palace, Gujari Mahal, Assi Khamba Ki Baoli, and Suraj Kund are other important monuments found in the complex. 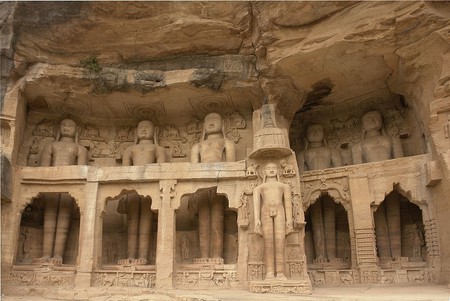