A Brief History of India and Pakistan and Their Independence 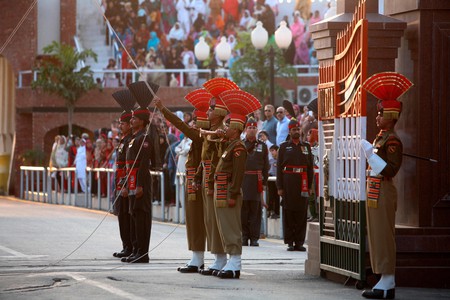 British rule in India can be traced back to the 17th century, when Mughal Emperor Jahangir gave the British East India Company permission to trade in India in 1617. Although the company faced initial resistance, it slowly began to consolidate its economic and political power in the country. What helped strengthen the company’s position was the fact that India was divided into numerous sub-kingdoms that ruled different parts of the subcontinent, including the powerful Mughals and Marathas. This meant that the company was able to take advantage of local fractures and tensions and employ a ‘divide and rule’ approach that saw it take control of most of India by 1850.

In 1857, Indian soldiers employed by the company revolted en masse. What became known as the Indian Mutiny of 1857 (or “the First War of Independence” in India) took the British several months to quell. The crackdown that followed led to British control of India being handed over directly to the British Crown. The British monarchy, under Queen Victoria, took control of the British India Company’s land and gained influence over India’s princely states. 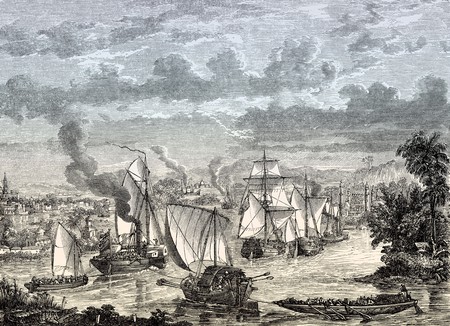 The ships of Major General Sir Henry Havelock at the Ganges River, during the Indian Rebellion of 1857 | © FALKENSTEINFOTO / Alamy

The events that led to independence

During the second half of the 19th century and the first half of the 20th century, Britain took control of India’s resources and, while investing heavily in infrastructure, channeled Indian wealth back to Britain and its global colonial projects. As a consequence, India suffered a series of famines that killed tens of millions of people. At the height of the Mughal Empire in the late 17th century, India was the largest economic power in the world. When India regained its independence in 1947, it was significantly poorer than it had been before British interference. During a peaceful protest at the Jallianwala Bagh park in Amritsar, British troops blocked all exits and opened fire, killing more than a thousand people. 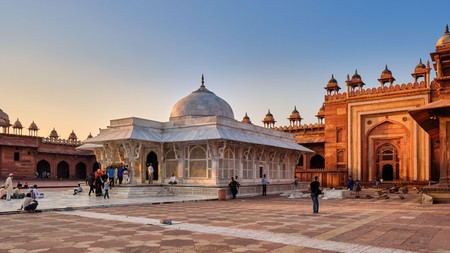 When did India and Pakistan gain independence from Great Britain?

By the early 20th century, organised resistance to British rule was taking shape throughout India. While Mohandas Karamchand Gandhi’s peaceful movement of non-cooperation and resistance is perhaps best known internationally, other figures such as Bhagat Singh and Subhas Chandra Bose promoted armed struggle and collaborated with Britain’s enemies during wartime.

World War II (1939–1945) was a major turning point for the growing independence movement. The Indian National Congress launched the Quit India Movement in 1942, refusing to cooperate with the British during the war until India gained independence. After the war, mutinies swept the Indian sections of the British Army. Although these were suppressed, British resources had been seriously depleted by the end of World War II and the British could no longer ignore Indian demands for independence. An announcement was made in early 1947 that India would be granted its independence, but how this new nation would look was still very much to be decided. 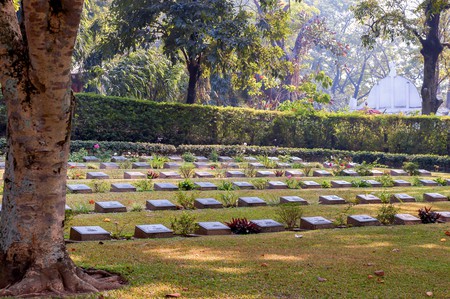 A World War II cemetery at Silpukhuri in Guwahati, India, for the burial of servicemen killed in the war | © Manab Sen / Alamy

Gandhi became the leader of the struggle for independence in 1921. The Jallianwala Bagh incident spurred him into taking on a larger role in the freedom fight, and in a few years his civil disobedience movement had become popular across the country.

Gandhi believed in non-violence, or ahimsa, and started the non-cooperation movement, in which he urged Indians to boycott British goods. He also led thousands of Indians in the Salt March against a British law that forbade Indians to make salt and force them to buy the heavily taxed British salt instead. Shortly after, Winston Churchill asked India to join World War II, and Gandhi responded by launching the Quit India Movement, which led to his arrest and widespread tension in India. Due to growing unrest in the country between Hindus and Muslims, plans were announced to partition British India into two nations – India and Pakistan. Gandhi had believed in unity, but was unable to stop the partition of the country into India and the new nation of Pakistan and the migration that caused the loss of a million lives. 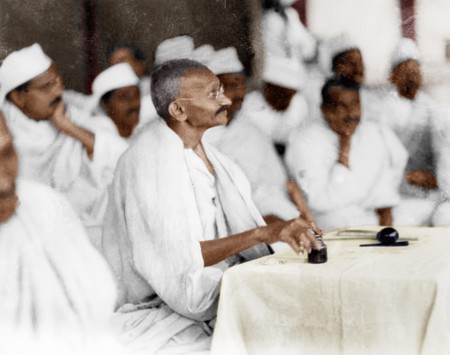 What led to the India and Pakistan partition?

Divisions between Hindu and Muslims had been encouraged by the British “divide and rule” approach. Muslims were a minority in India and some leaders were worried about what an India dominated by Hindu rulers would mean for them. Gandhi called for the two religious groups to work together, and the leader of the political group the Muslim League, Muhammad Ali Jinnah, believed that Muslims needed a homeland within India. However, widespread violence between Hindus and Muslims started in Calcutta in August 1946 and spread later throughout North India. During Direct Action Day, also known as the Great Calcutta Killings, Muslims in Calcutta went on hartal (strike) to press for the new nation of Pakistan. The protest resulted in the worst few days of communal rioting British India had ever seen. 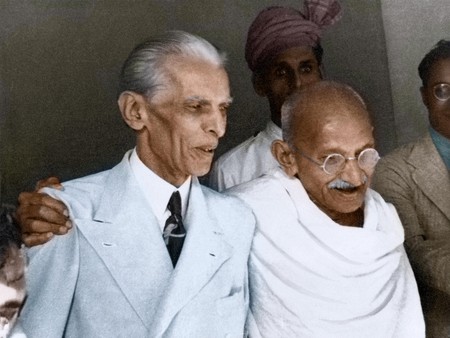 The Pakistan Movement or Tehrik-e-Pakistan

Although the majority of the Indian population under the British Raj were Hindus, some provinces (now called states)had Muslim majorities. Due to the political unrest in the country, Britain decided that India would need to be partitioned to carve out a separate homeland for Indian Muslims, but it wasn’t immediately clear which provinces would join which country. Some were given the right to choose, while others were divided up – the provinces of Assam, Bengal and Punjab were each split in half, with one half going to India and the other to the new Pakistan. The remaining princely states could pick a side. After the partition, Jinnah became the first Governor-General of Pakistan, and Jawaharlal Nehru became India’s first president. Gandhi, who remained the strongest advocate for a unified country, was shot by a Hindu religious fanatic in 1948, just a month before the last of the British troops finally left India. 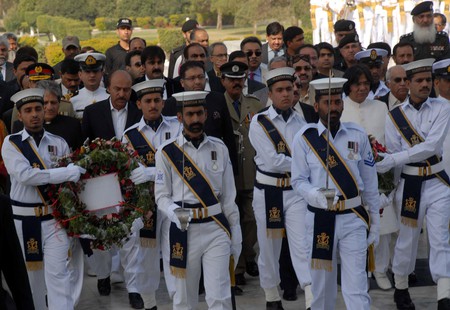 How Pakistan came into existence

A British lawyer named Cyril Radcliffe, who had never set foot in Asia, was called upon to draw up the borders between the two countries. Arriving in India just days before the partition, Radcliffe drew up a quick plan that was kept secret for fear that the British would be blamed for the violence that would surely ensue.

India and the new state of Pakistan were granted independence on 14 August 1947, but were only made aware of the new borders two days after. The weeks and months leading up to and following the partition saw unprecedented levels of rioting, violence, loss of property, rape, abduction and murder. The violence was worse in the two halves of Punjab, as Hindus headed in one direction and Muslims in another, with Sikhs and other minorities caught inthe middle. Accurate figures are difficult to determine, but it’s believed that up to 16 million people were displaced, up to 2 million were killed and up to 100,000 women and girls abducted or raped. 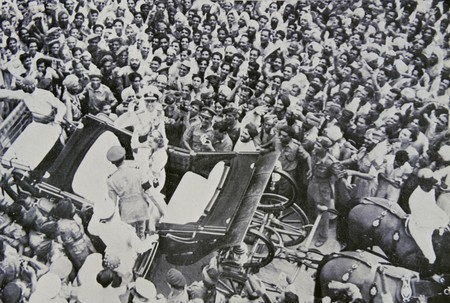 The British had given the 650 princely states the choice of joining India, joining Pakistan or becoming independent and, in the majority of cases, the respective geographic location became a determining factor. States with a Hindu-majority population, surrounded by India on all sides, almost naturally became part of India, but Kashmir, in the far north, was located between India and Pakistan. Although the ruler was Hindu, most Kashmiris were Muslims. Maharaja Hari Singh couldn’t choose between the two options, so he opted to remain neutral.

In October 1947, civil unrest had spread around Kashmir, and Pashtun tribespeople from the northwest of Pakistan were recruited to invade and attack it. Hari Singh fled to India and appealed to the Indian government for help. He ceded Kashmir to India, which led to the first war between Pakistan and India over Kashmir.

India referred the conflict to the United Nations, which asked the Pakistanis to remove their troops from Kashmir, after which India would do the same. Pakistan refused. A ceasefire was agreed in 1949, with a Line of Control (LoC) separating the 65 percent of Kashmir under Indian control from the 35 percent under Pakistani control.

The LoC was only meant to be temporary, but it remains the de facto border today. Tensions between India and Pakistan over Kashmir have risen and fallen since 1949, but no settlement has ever been reached. 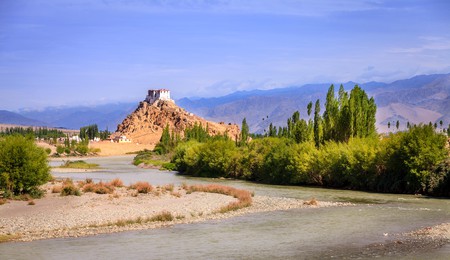 The birth of Bangladesh

No history of India and Pakistan’s independence is complete without remembering Bangladesh. The borders of present-day Bangladesh were determined in 1947 when the Muslim-majority East Bengal became East Pakistan and Hindu-majority West Bengal remained with India. Pakistan was then divided into two parts, with India between the two sides.

Although West and East Pakistan were Muslim-majority areas, they were culturally, ethnically and linguistically very different places.

In 1971, East Pakistan fought for independence and was backed by Indira Gandhi, who was then the Indian prime minister. The two-week Indo-Pakistani War was fought in early December 1971 and on 16 December (about nine months after the conflict in East Pakistan had begun), the West Pakistanis surrendered to India. The next day, Bangladesh was born, a name that means ‘Land of Bengalis’. 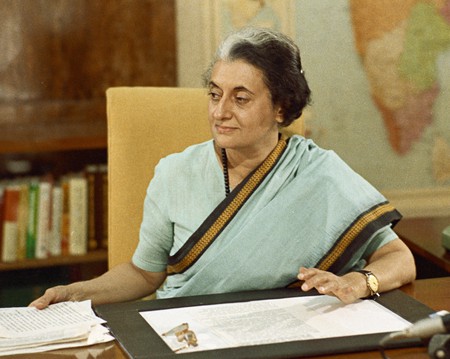