A Brief History of Fort St. George in Chennai, India 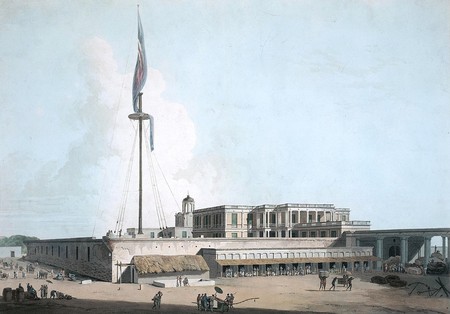 Chennai's Fort St. George, as depicted in a sketch from the 18th-century | ©British Library/Wiki Commons

Every year, Chennaiites celebrate the date August 22 with great fervor and enthusiasm as the day that marks the founding of Madras, the city that now known as Chennai. However, what many forget is that February 20 is equally important as it marks the date on which Madras became a physical entity with the first stones being laid for the construction of Fort St. George, a structure more crucial to the city’s history than any other.

Indeed, there can perhaps be no conversation about Chennai’s history without first mentioning the Fort, which even today serves as the seat of power for the Tamil Nadu Government. However, the importance of Fort St. George is not just restricted to the history of Chennai, but also plays an important part in the overall history of the British Raj in India. 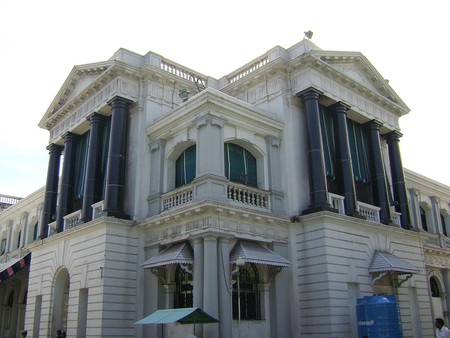 The Fort St.George in its current form is the seat of the Tamil Nadu Government | ©L Vivian Richard/Wiki Commons

By the mid-17th-century, trade in the Coromandel Coast was already prospering with the British East India Company vying for monopoly over its French and Dutch counterparts. To protect English trade interests in the area, it was decided that an English Fort was needed in the region. And so, in the year 1639, Francis Day and Andrew Cogan, representatives of the British East India Company, purchased the strip of land along and inward from the present Marina Beach from the then Nayak rulers of the region, for the construction of a new Fort that was dedicated to St. George, the Patron Saint of England. On February 20, Day and Cogan arrived at the site with two ships and a few dozen workers and began work on a settlement that would later become Fort St. George. The Fort was finally completed on April 23, 1644, and had cost the crown nearly £3,000. 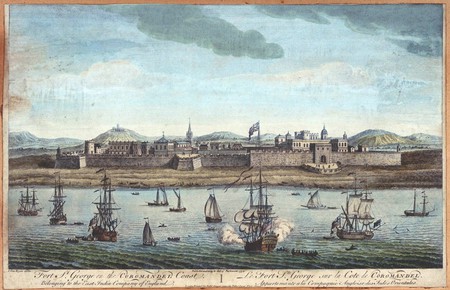 Fort St George on the Coromandel Coast. Belonging to the East India Company of England

A cornerstone of British power in India

The Fort was an essential center of power during over three centuries of British rule around the region and was also the location of several battles and historical events. Chief among those was its capture in 1746 by the French, who held it for nearly three years, before it was restored to the English in 1749. Over the course of several decades following that, the Fort faced many challenges and attacks from the French and also Hyder Ali, the Sultan of Mysore. It was finally modified and several parts were reconstructed in 1783 and the fort has existed in more or less the same form till present. The fort also has the distinction of being home to a number of ‘firsts’ for the British in India. Among these are the Clive House (constructed in 1609), said to be the first British settlement in India, St, Mary’s Church, India’s first Anglican Church, and the Fort Museum, which was initially the first office of the Madras Bank. 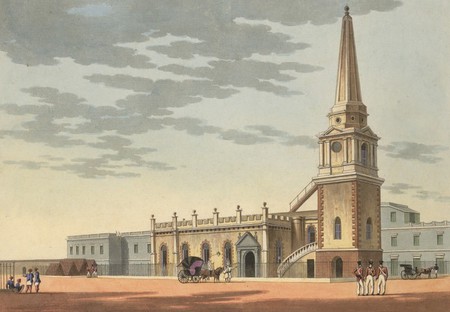 An artist’s rendition of St. Mary’s Church, the first Anglican Church in India, in the 19th-century | ©JW Gantz/Wiki Commons

While the Fort Complex was initially meant to support a small trade post, it soon burgeoned into a bustling city that was divided into White Town, where the English and Europeans stayed and Black Town, where dock workers and locals stayed. Within its 20ft walls, the British constructed several iconic structures such as the Wellesley House (named for Richard Wellesley, a former Governor General of India), St. Mary’s Church, a 150ft high Flag Staff, and the Fort Museum. 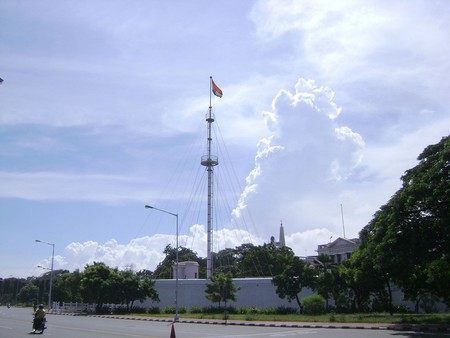 Museum and Garrison – Remnants of the Fort’s History

Although the usual day at the Fort is now dominated by the politics of Tamil Nadu, the remnants of its glorious history can still be witnessed at the Fort Museum, which houses some of the rarest artifacts from India’s British past. Among its collections are coinage, weaponry, and uniforms dating back to the colonial period and also several original letters from prominent figures such as Robert Clive and Lord Cornwallis. The Fort Complex is also still home to a garrison that once served as a source of British power in the region.