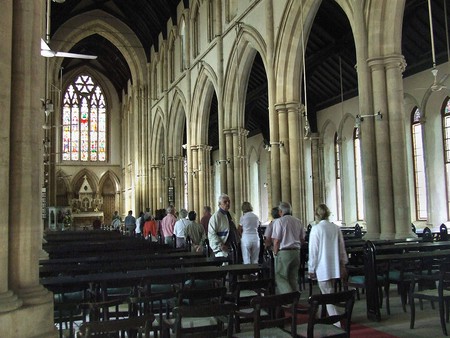 Among the many storied landmarks that grace historic Colaba in Mumbai, is a striking, beautiful Gothic structure dating to 1865 – the Afghan Church. With distinct architecture and quite a unique backstory, this church is a one-of-a-kind landmark in South Mumbai.

Also known as The Church of St. John the Evangelist, this Anglican church was preceded by a small chapel just a kilometer south of its present-day location. Soon the colonial government designated a patch of land for the new church to be set up on, also calculating that the new structure’s spire may serve as a useful landmarks for ships in the nearby harbor.

The construction of the church finally began in the 1840s to address the need to build a memorial to the thousands of soldiers who died at the First Anglo-Afghan War, and the subsequent retreat from Kabul in 1842. Fought between 1839 and 1842, this war had been a disastrous attempt by the British to encroach upon present-day Afghanistan, as a result of which all but one of 4,500 soldiers and 12,000 of their camp followers lost their lives. William Brydon, an assistant surgeon in the army, turned out to be the sole survivor on the British side.

Many of the soldiers who had fought and died in the First Anglo-Afghan War on the British side hailed from Mumbai, and so it was deemed fit to build a memorial in this city. Designed by English civil engineer and Gothic Revival architect, Henry Conybeare, the building had its foundation laid in stone in 1847 by then-Governor of Bombay, Sir George Russell Clerk.

The church was finally completed in 1865. A stained glass expert, William Wailes had been brought in to design the church’s east and west windows, while architect William Butterfield designed its altarpiece and the Afghan War Memorial mosaics.

With distinct, wide Gothic arches, impressive stained windows and a 60-meter-high tower and spire, this magnificent church stands tall today in Navy Nagar, towards the southern tip of Mumbai, and is owned and managed by the Indian Navy. It regularly hosts weekly services, while remaining an architectural landmark and major attraction for tourists from around the country and abroad.