A Beginner’s Guide To Malayalam Cinema

Bangalore Days | © Anwar Rasheed Entertainment, Weekend Blockbusters
Ask anyone who’s even remotely familiar with the industry, and they will tell you there is something distinctly different and special about Malayalam movies being made today. If regional cinema is the underdog of Indian cinema, with Bollywood hogging the limelight, then Malayalam cinema is no doubt the underdog of those regional industries. The Kerala-based film industry is becoming increasingly well reputed for producing some of the best movies in the country year after year, alongside Marathi cinema which is similarly serving up some truly groundbreaking films. The Malayalam film industry is turning more and more heads for the technical quality of their movies alongside innovative storytelling and exploration of socially relevant issues.

However, the industry still doesn’t get the credit it deserves, and although it has amassed more attention it recent times, when it comes to Indian cinema as a whole, the Malayalam industry still tends to fly under the radar. Many have desperately clung to Bollywood as the be all and end all of Indian cinema. And yet all it really takes is one film, the right film, to open up a whole new world of cinema which is refreshing as it is familiar. Take, for example, Anjali Menon’s Bangalore Days, which is a great foray into Malayalam cinema – it’s a whole new cinematic world to explore.

To put things into context, Malayalam cinema, or ‘Mollywood’ as it’s affectionately known, is one of the four cinematic industries from the South which includes the Tamil, Telegu and Kannada film fraternities. Malayalam is the fourth largest Indian film industry in the nation after Telegu, Tamil and Hindi, strictly going by the number of films made each year. The big distinction and differentiator of Malayalam movies is they are far less star focused, which means the film, story and script are kings, a key driver of why the industry is dishing out some truly stellar cinema. There are no reigning Khans as such whose face beckons the masses and sets the box office on fire, regardless of how silly the content may be.

This reputation of quality cinema with relatable themes dates back to the ’70s and ’80s, often referred to as the golden age of Malayalam cinema, with directors such as Adoor Gopalakrishnan and John Abraham (no relation to the Bollywood actor), who was celebrated as a pioneer in avant-garde filmmaking at the time, with films like Amma Ariyan (1986) and Trisandhya (1972). Many of the movies released during this time were known to have narrowed the gap between art house and commercial cinema with films such as Mrigaya (1989), Oru Vadakkan Veeragatha (1989) and Kireedam (1989). This era also saw the rise of stars such as Mamootty, Mohanlal and Suresh Gopi. The decade following, however, witnessed a slump in the quality of films being made, in the late ’90s and 2000s, as they were largely dictated by over-the-top slapstick comedies with few films of real merit.

This was until the 2010s when the industry witnessed the grand renaissance of Malayalam films with what is being called the ‘New Generation,’ not unlike the Marathi New Wave. Instigated by films like Ritu (2009) and Traffic (2011), this cinematic rebirth is down to a new generation of young directors like Jeethu Joseph, Rajesh Pillai and Anjali Menon, who are dealing with unusual themes and new narrative techniques. Not to mention a new crop of actors like such as Dalquer Sulman, Fahad Fazil and Niven Pauly, who are readily playing different kinds of characters onscreen without carrying the star tag. Perhaps the most intriguing aspect of this revival is that this new wave of Malayalam filmmakers are deeply influenced by global cinema, which has resulted in refreshingly different kinds of storytelling yet still rooted in Malayalee life and issues.

The new generation is also characterized by the diminishing star culture. Given that the industry is so small, it doesn’t have the required budgets to focus on flashy gimmicks and scale, and as a result, the focus is on the writing and acting, putting the content at the heart of the film. This has been a key driver of Mollywood becoming one of the most progressive and celebrated film industries today. In that sense, it can be argued that its biggest weakness became its greatest strength.

What’s more, the majority of films are very much mainstream in their sensibility but include intelligent, well-thought-out plots, setting a new standard for mainstream commercial cinema across the nation. The sheer presence and impact of Malayalam films have also been well reflected in the National Awards, with 11 of the 63 national awards for Best Feature Film to date being awarded to a Malayalam film. The most recent of which was the 2010 Adaminte Makan Abu (Abu, Son of Adam), which also went on to be India’s official entry to the Oscars.

Despite many great films being made, the audiences have traditionally been largely restricted to the South – that is up until the last few years when they have managed to reach a far larger audience nationally and internationally. This has partly been driven by a string of strong commercial successes such as Bangalore Days (2014), Drishyam (2013) and Premam (2015), all of which grossed more than 50 crores, which was record breaking for a Malayalam film. The critical and commercial success of these films have led to many more eyeballs turning towards the industry. More recently, Kammatti Paadam has also set the national and international box office on fire. 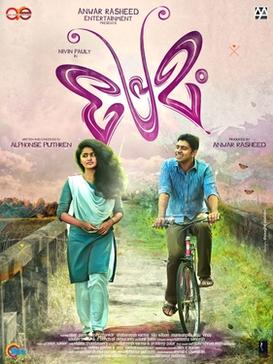 This has further been aided by the rise of multiplexes, resulting in Malayalam films now getting a far wider release across India. It is now not at all uncommon for Malayalam films to be screened at multiplexes across the nation, with both Premam and Bangalore Days enjoying a 50-day run in Mumbai, the home of Hindi cinema! The same is true for global reach, with the UK and US markets now also including Malayalam releases.

In the past, a further obstacle to the audiences has been the lack of subtitles and the refusal of filmmakers to foot the additional cost, which would allow these films to be enjoyed by non-Malayalee audiences. This has been a curious issue considering they would likely see more revenue as a result. Luckily, the last few years have seen a change with most Malayalam releases in the north and abroad being inclusive of subtitles. The fact of the matter is that the world is getting smaller, with language no longer being a barrier for people to consume and enjoy cinema from the world over, which is pushing Malayalam films into the much-deserved limelight.

There is no doubt that Malayalam is one of the most progressive and innovative film industries in the country, not to mention a fascinating case study of what a lack of a star culture and big budgets can really achieve, and deserves to be far more recognized for it. So consider this a heartfelt request to any and all cinephiles out there, to catch a Malayalam film, be it one listed here or otherwise. It will be a wonderfully rewarding cinematic experience. There has never been a better time to be a follower of Malayalam cinema, with many calling it the greatest era of Malayalam films ever.