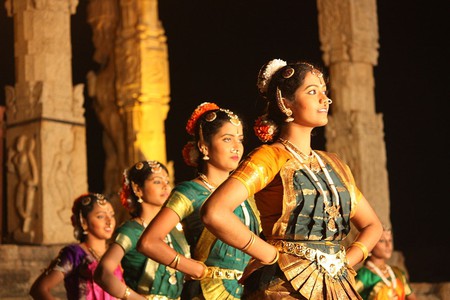 Thanjavur is known for being home to some of the most famous historic structures in Tamil Nadu, including a UNESCO World Heritage Site in the Brihadeeswarar Temple. But this sleepy town in the state’s centre has much more to offer than just architectural marvels. In fact, for anyone with an interest in South Indian art, music and dance forms, Thanjavur is nothing short of a pilgrimage and thoroughly deserves the title of being ‘South India’s Cradle of Arts’. Here are the reasons why.

Birthplace of the ‘Trinity of Carnatic Music’

Chennai may have taken up the mantle of popularising Carnatic music in recent decades, but the title of being the ‘Birthplace of Carnatic Music’ will forever belong to Thanjavur. Particularly because of the fact that the region around the town was home to three of Carnatic music’s greatest composers/saints – Thyagaraja Bhagavathar, Syama Sastri, and Muthuswami Dikshithar, who would together come to be called the ‘Trinity of Carnatic Music’. The three composers were contemporaneous to each other, having lived and composed in the second half of the 19th century. Saint Thyagaraja, in particular, is credited with popularising the art form and bringing it to the masses. 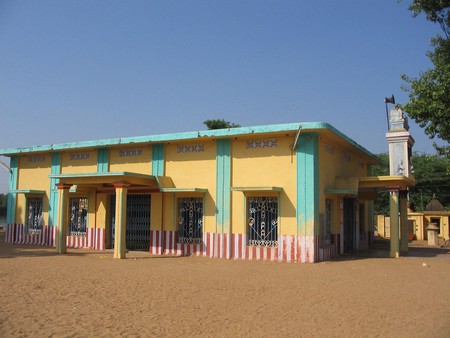 The historical centre of culture

While the history of art and poetry in Tamil Nadu dates back to the Sangam era, centred in Madurai, records suggest Thanjavur too has a history dating back nearly two millennia. But the real resurgence of the city to historical importance happened at the turn of the second millennia under the rule of the Chola kings, who were renowned for their patronage to art forms. The Chola rule fostered the developed of various art forms such as dance, poetry, and sculpture, but the largest strides were made in architecture. It was under the rule of Raja Raja Chola I that the magnificent Brihadeeswarar Temple was built, and for several centuries served as a centre of cultural and artistic advancement. 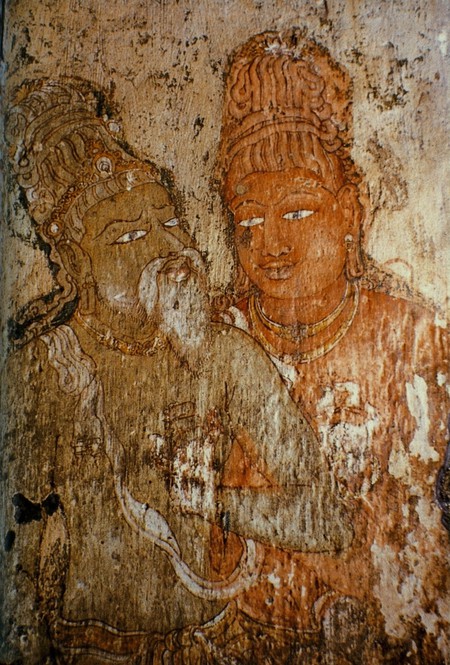 It would, however, be wrong to attribute to the Cholas the full credit for Thanjavur being called the cradle of arts. What really sets this historic city apart is the fact that over the course of the second millennia, it was ruled by at least five different dynasties and empires, such as the Vijayanagara Empire, Nayaks of Thanjavur, and the Maratha empire. It was the confluence of these various empires and their cultures that shaped the art forms of Thanjavur. While the Vijayanagara kings were famous for their patronage of the arts and influenced local architecture through maintenance of historic structures, the Maratha kings brought in their own architectural and artistic styles through palaces and other structures. 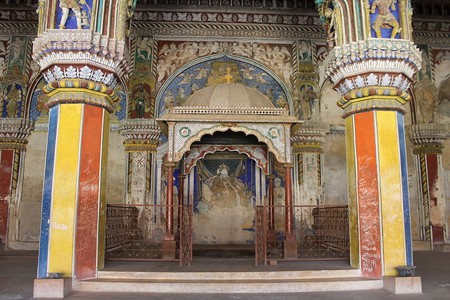 The art of Indian doll-making goes back centuries, but one of the prominent varieties are the Tanjore Bobblehead Dolls, which are native to this region. The tradition of making and displaying these dolls is closely associated with the Indian festival of Navaratri in which Tamil families celebrate by decorating their homes with various dolls and idols of gods and goddesses. The Tanjore Dolls have seen a resurgence in interest in recent decades, especially as a handicraft item and have been identified as a geographical indicator. The best place to go shopping for some Tanjore Dolls is the Thanjavur market located opposite the Brihadeeswarar Temple. 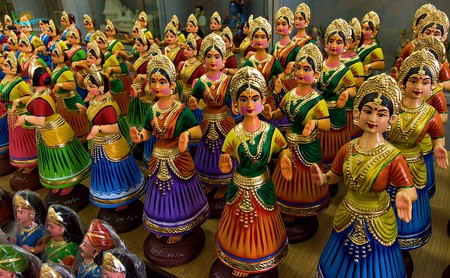 Unlike in western traditions, sculptures in Tamil tradition are considered an integral part of temple architecture. And Thanjavur being home to some of the most prominent temples in the state was also an important historic centre for both sculpture and architecture. Some of the best and grandest examples of both these forms can be seen in the Brihadeeswarar Temple, which not only employed advanced architectural and engineering methods for its time but also set the benchmark for sculpture-work in Tamil architecture. 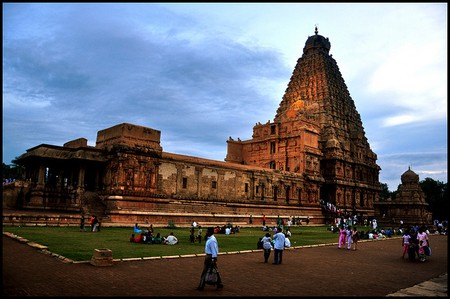 The Melattur Bhagavata Mela is unique in the annals of South Indian performance art tradition in more ways than one. With a history going back to the 16th century, this theatrical performance has been held annually without break for more than 300 years in the tiny hamlet of Melattur in Thanjavur district. While the festival takes place in Tamil heartland, it is performed in Telugu and has its roots in the Kuchipudi style of dance from Andhra Pradesh. The theatrical performance usually portrays Hindu gods and goddesses and revolves around Hindu mythological themes.

Home of the Tanjore Paintings

Tanjore Paintings are one of the most important traditional art forms of South India and have been recognised as a geographical indication by the Indian government. Traditionally used to portray Hindu gods and goddesses, this style involves rich colour schemes and is particularly known for its use of inlay work with glass beads, semi-precious stones and gold foil being the most common. Thanjavur paintings have seen a resurgence in interest in the recent decades, with many galleries now making this traditional art form easily available. 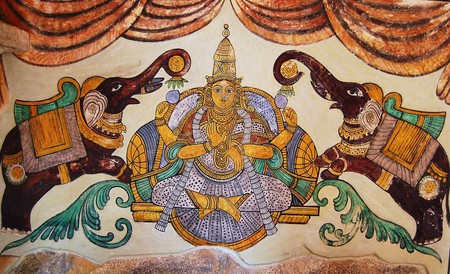 Apart from being one of the most popular South Indian art styles, Thanjavur paintings are also particularly noteworthy for their influence on famous artists and South Indian art movements. Its influence can be seen in the works of legendary Indian artist Raja Ravi Varma and also other artists such as C Kondiah Raju. Apart from modern art movements, the Thanjavur style of painting also influenced other traditional art styles in the region such as Kalamkari and Tirupati. 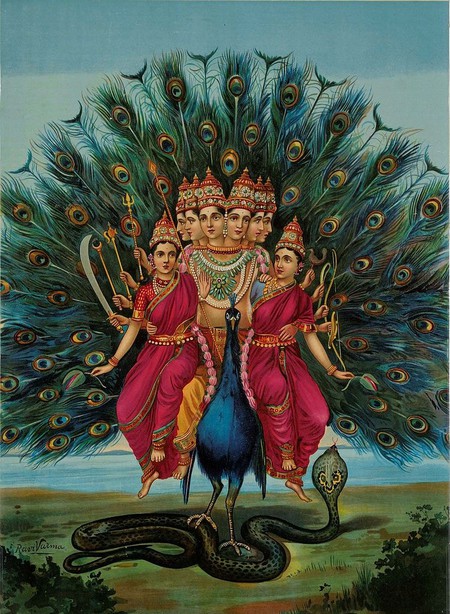 Thiruvaiyaru and the Thyagaraja Aradhana

While the Madras Music Season takes the cake for being the longest and largest Carnatic music festival, it is the annual Thiruvaiyaru Thyagaraja Aradhana that acts as the cultural epicentre of the Carnatic style of music. Held on the banks of the river Cauvery in the town of Thiruvaiyaru in Thanjavur district, this festival commemorates the life and work of Thyagaraja Bhagavathar, one of the founding fathers of Carnatic music. A musical extravaganza unlike any other, the Thyagaraja Aradhana is attended by almost all the big names in Carnatic music. It is known for its spiritual flavour and draws a global audience of fans and devotees. 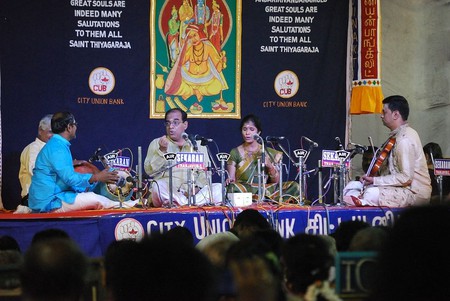