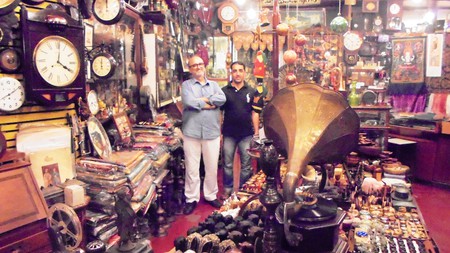 A quaint 80-year old curiosity shop still retains its old-world charm in the ever-changing city of Chennai, and it holds many treasures to browse and uncover.

The colonial buildings of Mount Road are offset by a red-bricked, dignified oddity of a shop. The Old Curiosity shop, also known as the Kashmir Art Palace, has been in business for about eighty years (twenty short of antiquity) on the busy streets of Chennai. 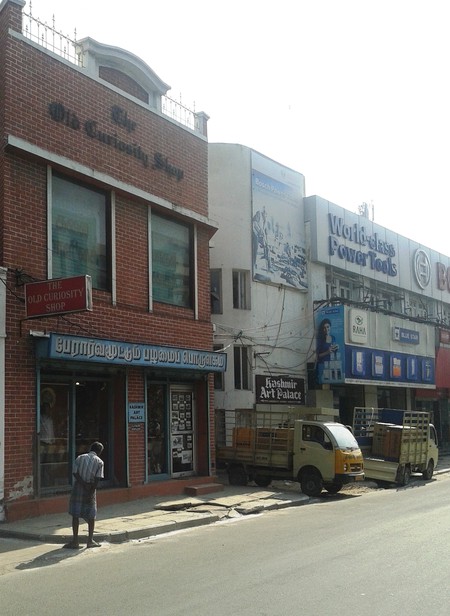 The British, as part of their colonial project of redefining other cultures in their homeland (soft power), carried away “objects of curiosity” and showed them in famous “World Exhibitions.” This practice also cultivated acceptance and marvel for their work abroad back in the UK. Known as “cabinets of curiosity,” they formed the early exhibits of foreign cultures, and thus, the concept of the modern museum which housed exotic objects was born. 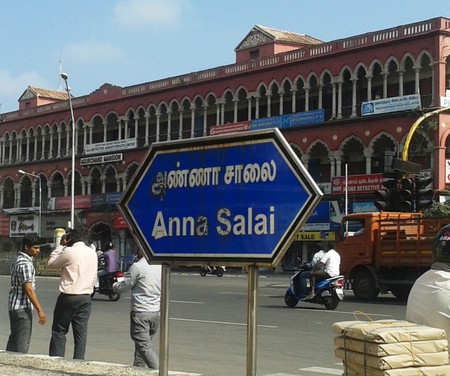 This spot once mainly sold Indian objets d’art to the British, and as its collection expanded, to the wealthy Indian folks as well. The front door is papered over with early photographs of the city of Chennai — its rivers, Indo-Saracenic buildings, horse carts on the empty roads, and the look of the early commercial streets.

The present proprietor, Mohamad Lateef, an engineer by training and collector by passion, is a conversational delight. His stories, alongside the objects of curiosity, connect many regions, histories, people, and art. Kashmiri by lineage but soaked in Tamil culture, Mr. Lateef speaks slightly quaint English. While he stands by the entrance to the back room, he picks up an antique unruly ringing phone and answers in unmistakeable Chennai Tamil. His conversations with his helper, Bashir, are peppered with Kashmiri and its tonal ridges.

Kashmir was one of the first few princely kingdoms that produced gift commodities for the market, according to Mr. Lateef. The two names sit as if wedded by history — Kashmir Art Palace was also renamed the Old Curiosity Shop, and one does not deny the other.

He points out Kashmiri walnut woodwork from close to a century ago, with intricate patterns on cylindrical canvases of wood, that are stacked an inch away from the ceiling. Tablets of inscribed Arabic and verses from the Quran occupy the line of woodwork, and the higher shelves are filled with beautiful metal objects including samovars, food bowls, water jugs from Tibet, Central Asia and Persia. This is a veritable museum in its own right.

Lots of silver is scattered throughout the shop, which Lateef says was highly prized in Kashmir. Jewelry was never merely a marker of status; it was most importantly, mobile wealth and useful in conflict-ridden societies. Lateef also chuckles at the strange reversal of purchasing trends throughout time; once, the elite choose to buy terracotta, bone, and bead jewelry while the poor stocked up on gold.

This shop has always been a popular visiting stop for many celebrities — it was visited often by the Nehru family on their trips to Chennai and it holds an original letter written by then President Sarvepalli Radhakrishnan. MGR, Jayalalitha and other luminaries of the Tamil film industry later made frequent visits as well.

As it is with spaces that speak of times past, contemplative silence seems like the only option. However, Mr. Lateef lovingly caresses each object with recognition, including visitors in his open reveries and discusses why he does what he does. For those truly passionate about objets d’art, he says, collecting is about empathy and not greed.

The same applies to the act of selling: his philosophy pervades his living practice and the status of the shop. He believes that every hand-made object made precious by the effort deserves its value. Most objects in his shop come from everyday economy and work, but there are some “elite” art objects as well. There are also many objects that have remained in the shop since the beginning, which have never been sold. It is a shop of mysteries, since no one but the caretaker (as Mr. Lateef refers to himself) knows the true antiquity of objects, nestling in the aura they bestow upon each other.

He points to an object that refracts prisms of light on its uneven edges. It is a mountain of mineral —jagged and carved by the precise hand of time. Every single shard of the mineral is hexagonal, including its sand-tipped crevices. Under the naked eye, this object created by the pain and pressure of a million years, twinkles beatifically like its caretaker.
He picks up another object, from a place slightly hidden from view. “Certain artefacts come from trauma”, he says “as the truly creative, most precious objects always do”. Love, he believes, demands submergence and immense pain. He opens this teardrop-shaped box studded with turquoise. Where does the object come from and what is it made of? The answer is truly remarkable: the box is of Tibetan artistry, hand- beaten and made with brass artillery shells, left behind from Tibet’s long conflict with China. Brass is not a metal commonly found or used in the Himalayan region. For a landscape filled with the metal remnants of war, the whole country becomes a wasteland. Art is thus fashioned from armed conflict that leave their traces on the streets as grim reminders. This speaks of the ingenious creativity of the hardy Himalayan folk, of linking waste and pain with the act of dignified living.