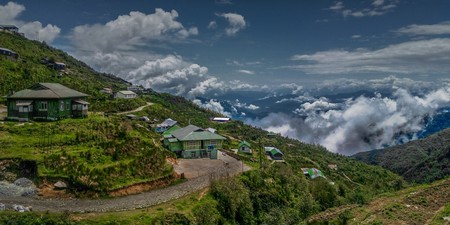 The eight states, which form the Northeast region of India, are a treasure trove of mesmerizing myths and legends. This part of the country has been left unexplored for years and even many Indians themselves will have little knowledge about it. Here are some interesting folkloric myths and legends to help you get an insight into this beautiful region’s unique culture.

The Leap of Ka Likai

Some of the most breathtaking natural sights of India are hidden in the picturesque landscape of Northeast India. Nohkalikai Falls in the state of Meghalaya, which is the tallest plunge waterfall in India, is one of them.

Legend has it that a poor woman named Ka Likai (the prefix ‘Ka’ denotes the female gender) remarried after her husband’s death so that her infant girl could have a father figure. But her second husband was jealous of the love Ka Likai showered upon the baby. One day, when Ka Likai left for work, the man killed the baby, chopped her into pieces and cooked a meal out of her. When a tired Ka Likai returned home, she couldn’t find her daughter anywhere, but having worked all day as a porter she was famished and couldn’t resist the temptation of the curry her husband had cooked. It was only later that she found the severed fingers of her baby and realized what had happened. Filled with grief, she went mad and started running furiously. When she reached the edge of the plateau from where the waterfall plunges, she jumped to her own death. Thus the waterfall is named Nohkalikai, where Noh means ‘to leap’ in the local Khasi language. 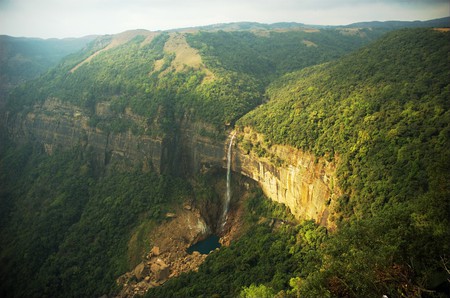 Unakoti Hills is a pilgrimage site for Lord Shiva located in the state of Tripura. There are several legends associated with this surreal place, which has massive rock reliefs commemorating the Hindu god. One among them is that of a local sculptor named Kallu Kumar, who was a devotee of Shiva’s wife Parvati. He wanted to accompany the deities to their abode on Kailash Parvat, but Shiva wasn’t too keen on the proposition. It was then that Parvati suggested that Kallu Kumar carve out one crore (10 million) images of Shiva overnight to appease him. Even though he laboured tirelessly all night, the sculptor fell one short of the said number and hence missed his opportunity. Unakoti, thus, can be literally translated to one less than a crore.

The state of Sikkim is made up of three ethnic groups: Lepcha, Bhutia and Nepali. About 70% of the total population here are Nepali. Needless to say, many of the local legends have been borrowed from Nepal and one such is that of the Ban Jhakri (forest shaman). Ban Jhakri is a powerful shaman who kidnaps young boys, not for any evil intentions but to train them to become shamans themselves and carry on the legacy of the Ban Jhakri. If you ask anyone from the older generation of Sikkimese, they’ll tell you that they’ve known many children who’ve returned years later as powerful Jhakris orshamans after their abduction. There are still many Jhakris in Sikkim but nobody can really confirm the existence of the Ban Jhakri.

Lepchas are born out of Mount Khangchendzonga

Lepchas are widely considered to be the first settlers of Sikkim. Their primogenitors Tukbothing and Nazong Nyu, equivalent to Adam and Eve, are said to have been created by God from the pristine snows of Mount Khangchendzonga’s peak. They were then sent to live in a utopian land nestled beneath the great mountain, which is Sikkim. According to the book Khangchendzonga: Sacred Summit, Lepchas have never left their holy mountain’s shadow, which is why Mount Khangchendzonga can be sighted from every Lepcha village you visit.

In the state of Nagaland, there are some who hold the belief that their spirit does not reside within themselves but in an animal, especially the tiger. In the guise of a tiger, these souls wander around the forests and sometimes reunite with humans in the latter’s dreams. There are many legends related to the bond between tiger and man in Naga culture. One suggests that a man, a tiger and a spirit were once blood brothers.

When their mother passed away, man and tiger quarrelled over who would receive their mother’s worldly possessions. They decided to hold a competition to settle the matter. Man, with his guile, eventually beat the tiger, who then went to dwell in the forest. The spirit, angered by man’s deception, cursed him so that he’d never see the spirit again. Later, when man began to miss his brothers, he came up with an array of rituals to appease them. These ceremonies became a part of Naga culture in due course.

Mayong – the land of black magic

Today, Mayong in the state of Assam is becoming a popular tourist destination with attractions like the Pobitora Wildlife Sanctuary very close to the village. However, what Mayong is most famous for is its association with occultism. It is, after all, known as the land of black magic in India. Tales about the disappearance of humans into thin air, of people being turned into animals and terminal diseases being cured abound here.

There are no records to confirm how black magic started in Mayong but sorcery has been a way of life for the natives of the village for centuries. Some believe that the name Mayong comes from the Sanskrit word Maya, which means illusion. Archaeological findings also suggest that under the Ahom dynasty (1228–1826), conducting human sacrifices was a common practice here. Several ancient relics of black magic are now preserved in the Mayong Central Museum. 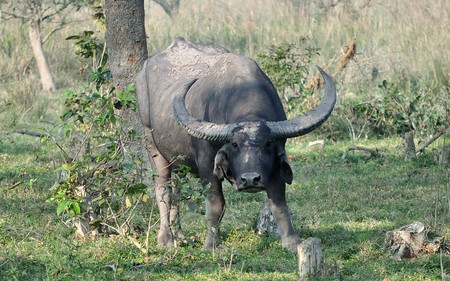 The legend of Kamakhya Temple

The Kamakhya Temple in Assam is a renowned pilgrimage site in India. There are many legends about the temple but the most famous one is about Lord Shiva and his first consort, Sati. The goddesses’ father King Daksha once held a yajna (a Vedic ritual performed in front of a sacred fire) but did not invite Sati and Shiva. Upset at this, Sati went to confront her father who then insulted her husband. Unable to bear this disrespect, she threw herself into the sacred fire. Enraged at Sati’s death, Shiva carried her body and began performing the Tandav (dance of destruction) nearly bringing the world to an end.

In order to stop him, Lord Vishnu cut Sati’s body into pieces and the different body parts fell in 108 locations across the country, which are today known as Shakti Peeths. The Kamakhya Temple was constructed at the site where Sati’s reproductive parts had fallen. The temple is unique in that it celebrates women’s ability to conceive and even has an annual festival in the month of June, which celebrates the menstruation period of Goddess Kamakhya Devi. 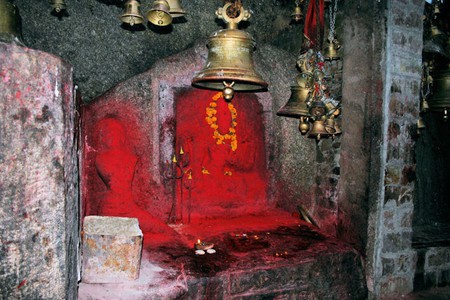 The beginning of the storytelling tradition

The tradition of storytelling is an important one among many of the tribes residing in different parts of Northeast India, including the Khasi tribe of Meghalaya. It is said that ages ago, a Khasi man received a document from God, which contained religious and philosophical teachings as well as guidelines for performing various rituals. On his way back home, the man lost this important document. Fearing his kinsmen’s rage, the man said to them that all the teachings of a God were recorded in his mind and he would orally pass them on to the others. This is how the tradition of storytelling is believed to have started among the Khasi tribe.

Khasi girls in traditional attire | © Bogman / WikiCommons
Give us feedback