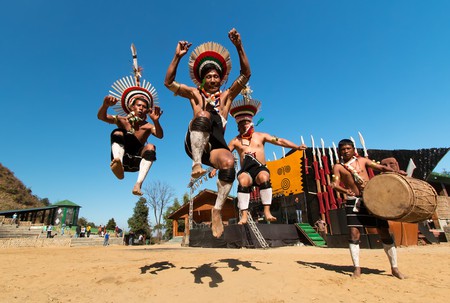 Northeast India is a region comprised of eight states. Even though they’re often clubbed together, the culture of each state differs vastly from one another. Here are some great books that will help you experience the history and traditions of this fascinating land.

While the rest of India was celebrating their newfound independence from the British rule, Nagaland was fighting the Indians for their own freedom. For decades, the underground rebellion forces from Nagaland engaged in a bloody battle against the Indian Army, trying to establish their own separate nation. The violence that took place during this struggle and the atrocities the common people faced is poignantly laid out by Temsula Ao in this book of short stories. A young woman singing, even as she is being raped, is just one of them.

Apart from the Nagas, the memories of this tragic past are unknown to most, even within India. Ao’s book is definitely not an easy read but it’s an important one in understanding the turbulent history of Nagaland.

These Hills Called Home: Stories from a War Zone | © Zubaan

The Mothers of Manipur, Teresa Rehman

On the morning of July 15, 2004, 12 elderly women met at the Kangla Fort in Imphal, the capital of Manipur, stripped off their clothes and shouted ‘Indian Army Rape Us. Eat our Flesh.’ The Meira Paibis, or women torchbearers of Manipur, were protesting against the brutal rape and murder of 32-year-old, Thangjam Manorama by the soldiers of the 17th Assam Rifles. The merciless troops had even riddled her genitals with several bullets. In Manipur, the Armed Forces Special Powers Act has been in place since 1980, giving the army the power to shoot, arrest and search without a warrant.

The Mothers of Manipur, by renowned journalist, Teresa Rehman, delves into this heartrending incident 13 years later and tells the story of how these ordinary women made the nation stand up and take notice of a harrowing act, which otherwise would have been brushed aside, as most events from this region are.

The Mothers of Manipur | © Zubaan

When the River Sleeps, Easterine Kire

When the River Sleeps tells the tale of Vilie, a Naga hunter who is on a quest to find something called a heart stone, which provides its owner with boundless powers. He encounters a fair share of supernatural elements along the way including forest spirits and a vindictive sorceress. When The River Sleeps may seem like a folktale, but the book is also a social commentary. Through Vilie’s fantastic journey across the scenic forests and mountains of Nagaland, Easterine Kire draws readers into the unique culture of her homeland where humans and nature have coexisted for centuries. This novel was also the winner of the 2015 Hindu Literary Prize.

When the River Sleeps | © Zubaan

Across the Chicken Neck: Travels in Northeast India, Nandita Haksar

Nandita Haksar is a lawyer and human rights activist who has worked in Northeast India for over three decades. In this travel book, Haksar sets off on a road trip with her husband Sebastian Hongray across the Chicken Neck, which is a slim strip of land about 33 kilometres long, that connects the entire Northeast to the rest of India. During their journey, the couple traversed over 15,000 kilometres in four months. They met and spoke with locals from all the different states of the region and collected invaluable narratives, which unlike most other books, provide insight into the history and culture of the land.

Across the Chicken Neck: Travels in Northeast India | © Rupa Publications

The Legends of Pensam, Mamang Dai

Mamang Dai is a beloved poet from the easternmost state of India, Arunachal Pradesh. Although a collection of short stories, in The Legends of Pensam, Dai has used every bit of her poetic skills to make the book almost lyrical. The stories are focussed on the Adi tribe, who belong to the beautiful Siang Valley in Arunachal Pradesh, which is now a popular trekking destination. Through fascinating myths and legends, the writer highlights the age-old customs and beliefs of her community. As it is with most cultures of Northeast India, the Adi tribe also follows an oral tradition and through this book, Dai has made an attempt to preserve her heritage, which has been so influential in shaping her as a writer.

Before its annexation to the country in 1975, Sikkim was a tiny Himalayan kingdom that functioned as a semi-sovereign entity of India. Sikkim shares its borders with China, Nepal and Bhutan, placing it in a very sensitive geopolitical location. Set against the backdrop of Cold War conspiracies in Asia, Sikkim: Requiem for a Himalayan Kingdom relates the failure of a small realm trying to survive against a much bigger nation despite the best attempts of its charismatic ruler, King Palden Thondup Namgyal, and his American wife, Hope Cooke. With the help of 5,000 troops and within 30 minutes, Prime Minister Indira Gandhi had managed to bring Sikkim under her command.

Anyone who wants an insight into the history of Sikkim should read this book, which provides dramatic details about the last days of the Himalayan kingdom. The political schemes almost feel like a thriller genre, making the book a highly enjoyable read.

Khasis are an indigenous ethnic group from the state of Meghalaya, who have a rich story-telling tradition. Almost every aspect of their lives is connected with a fascinating legend. It is believed that the members of the tribe would gather around a hearth and listen to the village bard narrate tales. The title of the book derives from this very practice. The stories in the book are those that the author himself had heard from his mother and his close relatives when he was a child. He has transformed these folktales by adding new characters and dialogues, but without changing the essence of the story. The collection of 20 folktales in Around the Hearth: Khasi Legends make for a highly engrossing read.

The Maharaja’s Household is written by Maharaj Kumari Binodini Devi, a princess of the erstwhile royal family of Manipur. The essays in the book were first published in a local newspaper and their immense popularity led to the creation of this book. While the royal history of places, like Jaipur, have been well documented, few would even know that a kingdom existed in this part of the country. Binodini provides an intriguing account of life in the royal household on Manipur, which includes equestrian sports and elephant hunts as well as the continuous opposition to British influx. She also outlines rituals unique to Manipur in the book. The Maharaja’s Household is a one-of-a-kind book drawing readers into a world that has long since vanished.

The Maharaja’s Household | © Zubaan
Give us feedback