7 South Indian Singers You Should Know About 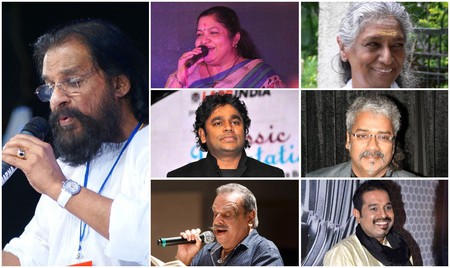 South Indian music is notable for producing some amazing songs, but what also makes them great is their singers. It is a skill and blessing for these vocalists to be able to sing in almost all the South Indian languages, and there have been some fabulous performers who have given the gift of their voice to music aficionados. Here are seven of the most illustrious sons and daughters of South India who have catapulted music into the highest realms.

Undoubtedly the best male singer from the south of India, Kattassery Joseph Yesudas has no rivals or equals. The sobriquet bequeathed upon him of ‘Gaana Gandharvan’, meaning ‘Celestial Singer’, could not be more perfect. With over 100,000 songs in a five-decade career, he is a legend of Indian classical, devotional, and cinematic songs in over ten languages including Arabic, English, Latin, Russian, and Indian languages such as Malayalam, Hindi, Tamil, Telegu, Kannada and Bengali.

With over 30,000 songs in a career spanning more than four decades, Krishnan Nair Shantakumari Chithra is a darling of music lovers in South India. Her oeuvre includes Indian classical, devotional, and film songs. She is the first Indian woman to be honoured by British Parliament, and also the only South Indian female singer to perform in the Royal Albert Hall in London.

Hailing from the state of Andhra Pradesh, Sistla Shreeramamurthy Janaki is the grand lady of playback singing in South Indian films. Janaki has recorded 48,000 songs throughout her 60-year-long career, using 17 languages including South Indian, Northern Indian, and even foreign languages such as Arabic, German, and Japanese.

One of the best known international faces of Indian music, Oscar-winner Alla Rakka Rahman, better known as A R Rahman, hails from the south of India. However, singing is just one of the ways he is connected with music, also being known for composing, songwriting, and music production. He is a master of fusion music, incorporating Indian classical music with electronic and world music as well as traditional orchestral arrangements.

A most versatile singer, Harihara is legendary not just in the south but across India for his melodious voice. From fast peppy numbers to classical rhythms, ghazals and soulful melodies, Hariharan has sung in a number of Indian languages and partnered with singer Leslie Lewis in a band called Colonial Cousins. He is also renowned for his masterful collaborations with other singers.

The evergreen romantic voice of Malayalam cinema, Paliyath Jayachandran – now in his 70s – sounds as young as he did when he first started singing some 50 years ago. For his soulful voice, he is thus known as ‘Bhaava Gayakan’ aka ‘Soul Singer’. A recipient of several state and national awards, Jayachandran has sung in all the south Indian languages and in Hindi.

A music composer and playback singer, Shankar Mahadevan rose to fame through the three-member music composing team of Ehsaan Noorani and Loy Mendonsa, together being popularly known as Shankar-Ehsaan-Loy. A recipient of several awards, he received his first award as playback singer in the Tamil film Kandukondein Kandukondein while collaborating with AR Rahman.