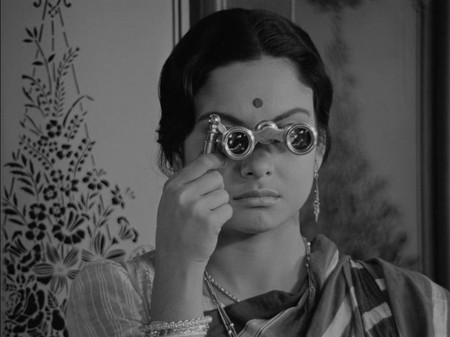 Films by Satyajit Ray are simple yet powerful. Even though they were regional films, their appeal goes beyond geographical and linguistic borders. The women portrayed in his films were detailed and multifaceted in both rural and urban settings. The cinematic representation of women by Satyajit Ray is such that they were never secondary to men and did not even compete against men.

Watch these seven films that can re-condition our mainstream cinema male gaze to understand how women of Satyajit Ray films cannot be reduced to a cliché. A masterstroke!

Based on a short story by Narendranath Mitra, the film depicted the beginning of the middle-class working wife in a Bengali family of Kolkata. A realistic depiction of socio-economic changes in urban life is shown through Arati (essayed by Madhabi Mukherjee), who transforms from a stay-at-home housewife to a working wife to share the burden of her extended family. The in-laws and husband are struggling to come to terms with this cultural shock. The film depicts beautifully the sense of achievement, independence, camaraderie and conflict that comes with the work-life scenario. It is also Jaya Bachchan’s debut film.

Based on a short story by Provatkumar Mukhopadhyay, the film is based in 19th-century rural Bengal, where a 17-year-old Dayamoyee is hailed and proclaimed as a goddess by her father-in-law. The story is a gripping tale of superstitions and the victimization of women at the whims of mysticism and blind faith. Daya, who is unable and later unwilling to break out of this goddess-like avatar imposed on her, is essayed heart-wrenchingly by Sharmila Tagore.

A set of three short films based on Rabindranath Tagore’s stories depicts three different female protagonists and the complex psychology of young adolescent women. The Postmaster is about a young orphan girl, Ratan (Chandana Banerjee), eight to ten years of age, who works as a maid in the village postmaster’s house and how the kindness of the new postmaster helps her in learning to read and write. The second story is Monihara (The Lost Jewels), a psychological thriller about a bored married woman, Manimalika (Kanika Majumdar), in a large lonesome mansion and how she finds companionship in the twinkling pieces of her jewelry. The third film is Samapti (The Conclusion), the story of a carefree girl, Mrinmoyee (Aparna Sen), who spends time on swings and chasing squirrels and her transition from a rebellious teenager to a woman in love.

Based on the novella Nastanirh (The Broken Nest) by Bengali author Rabindranath Tagore, the film narrates the story of a lonely housewife, Charu (played brilliantly by Madhabi Mukherjee), who lives a wealthy idle life and is ignored by a workaholic husband. It also shows how the arrival of her husband’s young cousin awakens her sexuality and ambitions. The film deftly depicts the dilemma of Charulata and the grey areas of her strong emotional feelings of dissatisfaction in marriage and the confusions of relationships.

Ghare-Baire is adapted from a Rabindranath Tagore novel by the same title. Shot in the backdrop of the Swadeshi movement, it is a love triangle between a Swadeshi leader, a liberal and a wife named Bimala (Swatilekha Chatterjee), who is encouraged towards discovering the world outside her domestic life.

This film marks the directorial debut of Satyajit Ray and is based on a Bengali novel by Bibhutibhushan Bandyopadhyay. It revolves around the life of Apu and his elder sister, Durga. Even though The Apu Trilogy, comprising of three feature-length films (Pather Panchali 1955, Aparajito 1956 and Apur Sansar 1959), is about the life of Apu, the female characters are crafted with utmost care. The elder sister, Durga (Uma Dasgupta), is portrayed as inquisitive, caring and a soul close to nature. The mother, Sarbojaya (Karuna Banerjee), is seen in the first two films as a complete character who maintains her dignity through the ordeals of poverty-stricken village life and is later reduced to grief by the loss of a child. The wife, Aparna (Sharmila Tagore), brings conjugal bliss to Apu’s life in Apur Sansar and is seen scribbling a message on her husband’s cigarette packet, reminding him to smoke less! All these women affect Apu’s life and learnings in various ways.

Ray’s films were way ahead of his time. His male characters undergo transformations as they spend some time away from the city and come in contact with the beautifully juxtaposed urban and tribal realities and with women who aren’t afraid of their own sexuality and are open to experiment.

His nuanced portrayal of women issues did not pitch women aggressively as a tool to present hatred towards men or undermine their position. He carves out characters and their settings to uphold women’s rights but not at the expense of men.